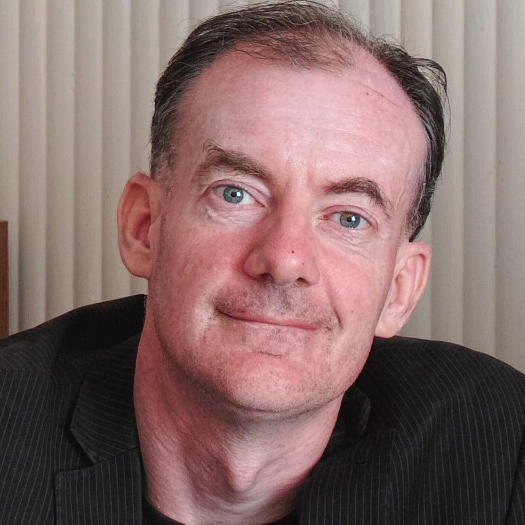 Transportation in and around Nagoya: Subway 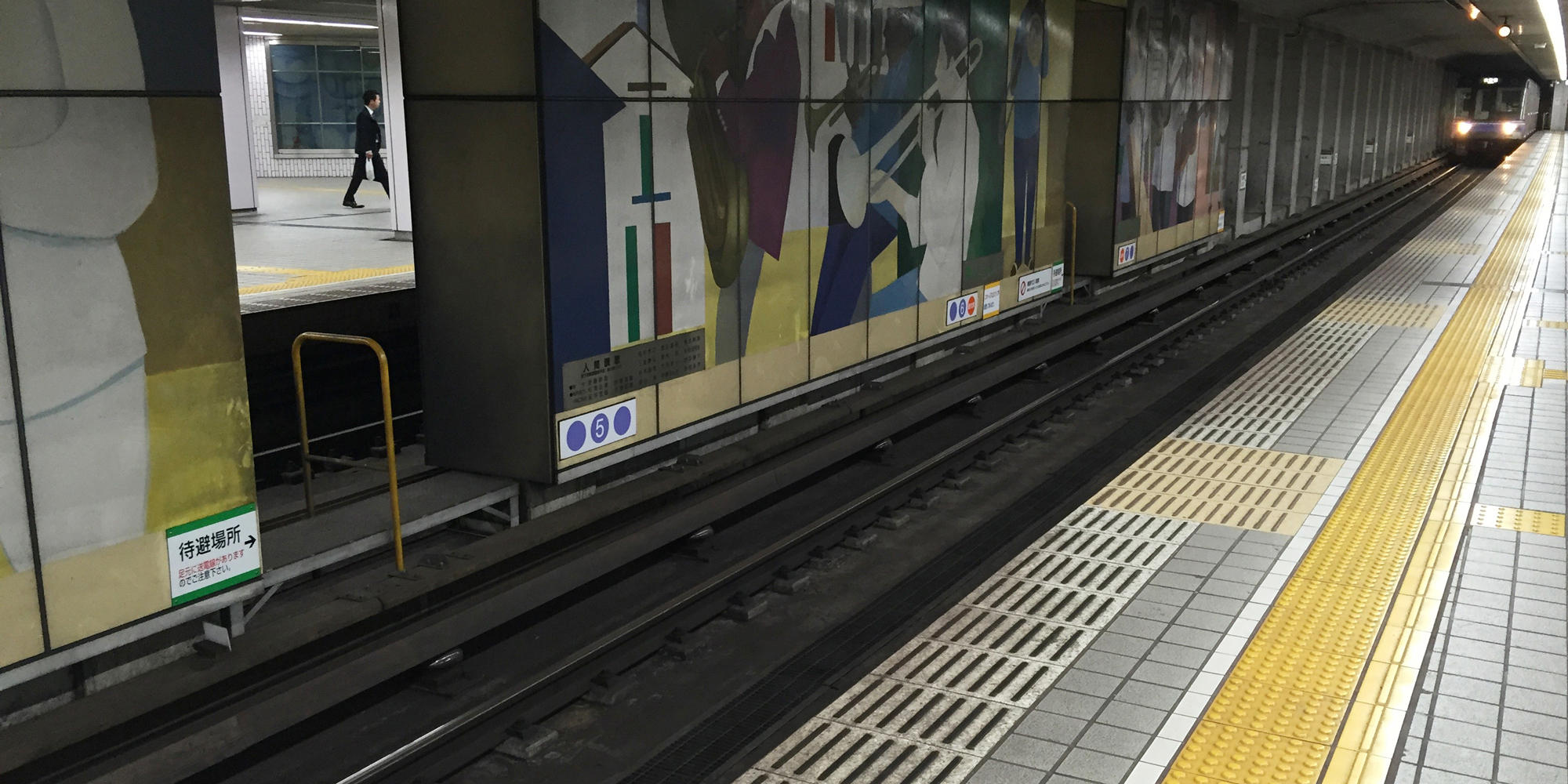 Nagoya is in some ways ideal in size for a major city : big enough to be interesting and worth exploring, but not so huge that we get no sense of where everything is.
In this article we would like to introduce the various ways of getting around the city and provide a few useful hints for using the various transport facilities. 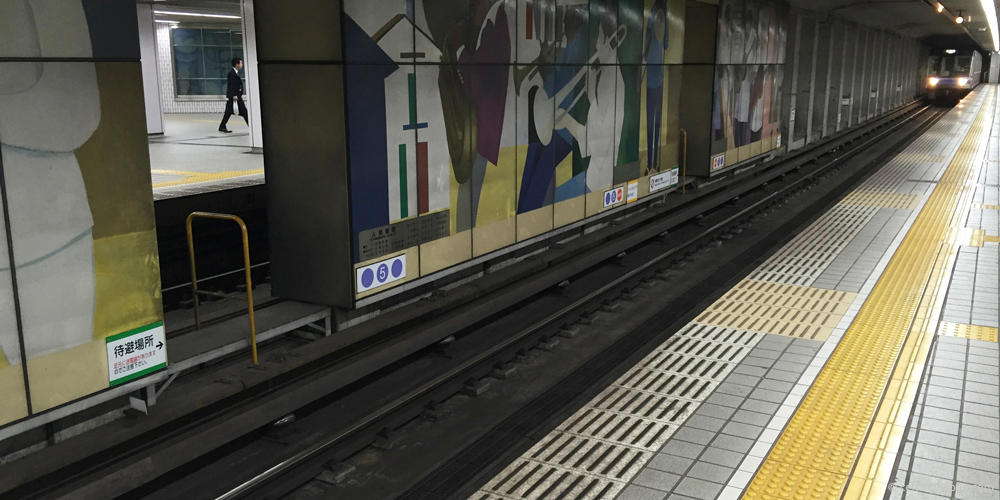 The Nagoya subway system has four main lines and a number of smaller lines. Between them they cover a significant part of the central area and beyond. Let’s look at them more closely. 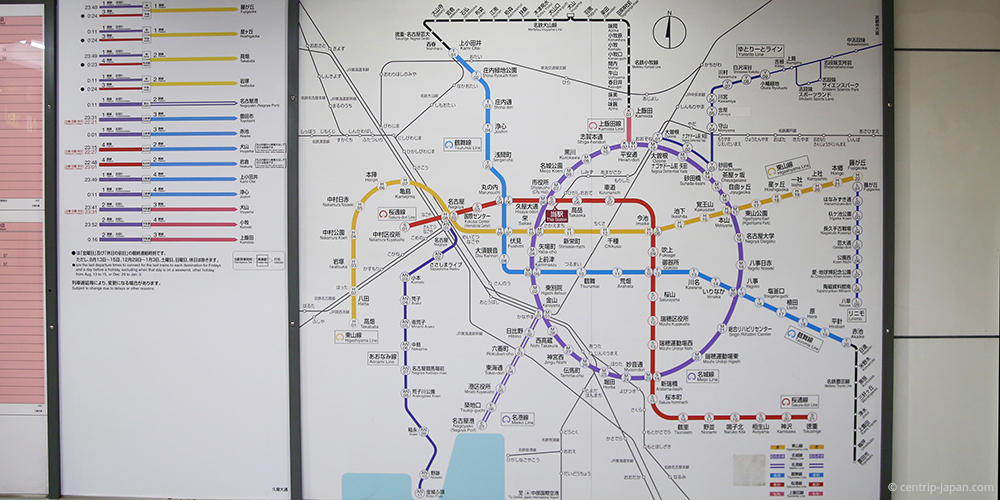 The Higashiyama line is represented by a yellow line. It runs from Takabata station in the west to Fujigaoka in the northeast. Among the stations it serves, the most heavily used are Nagoya station itself, along with Fushimi and Sakae, which represent the center of Nagoya’s shopping and entertainment district. 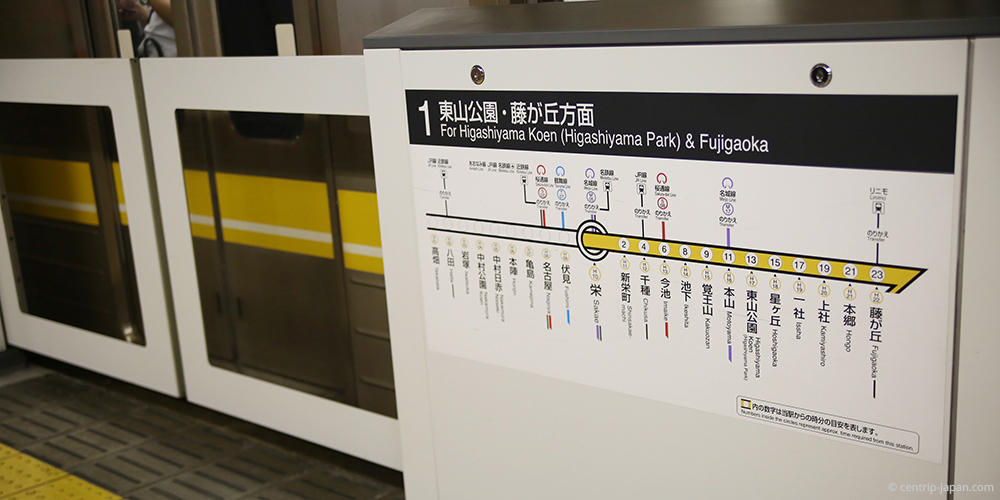 The Tsurumai line is represented by a blue line, running from Kami Otai in the northwest to Akaike in the southwest. The major stations along this route are Fushimi (which is also served by the Higashiyama line), Kamimaezu, Osu Kannon and Tsurumai.

The Meijo line is represented by a purple line and runs around the city in an approximately circular route. Trains run clockwise and counter-clockwise. The major stations here are Shiyakusho (City hall), Hisaya-Odori (one of the best places to get to the TV Tower), Sakae (also served by the Higashiyama line), Yaba-cho, Kamimaezu (also served by the Tsurumai line) and Jingu Nishi (the stop for Atsuta Shrine)


(Note that there is also a line called the Meiko line, which is related to but not the same as the Meijo line. The Meiko line will be introduced later). 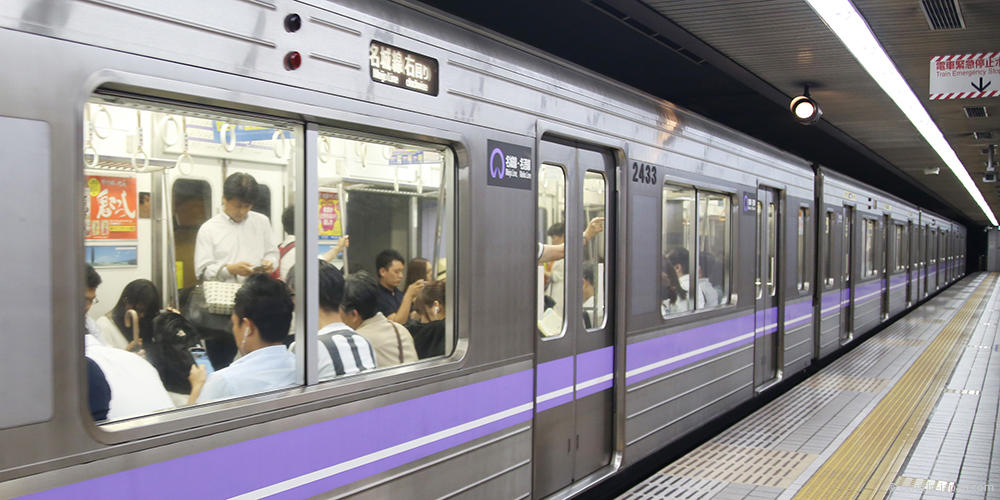 The Sakura-dori line is represented by a red line. It runs from Nakamura Kuyakusho, which is one stop away from Nagoya station, and terminates at Tokushige in the southeast. Major stations are Nagoya, Kokusai Center, Marunouchi (also served by the Tsurumai line) , Hisaya-Odori (also served by the Meijo line) Imaike and Sakurayama. 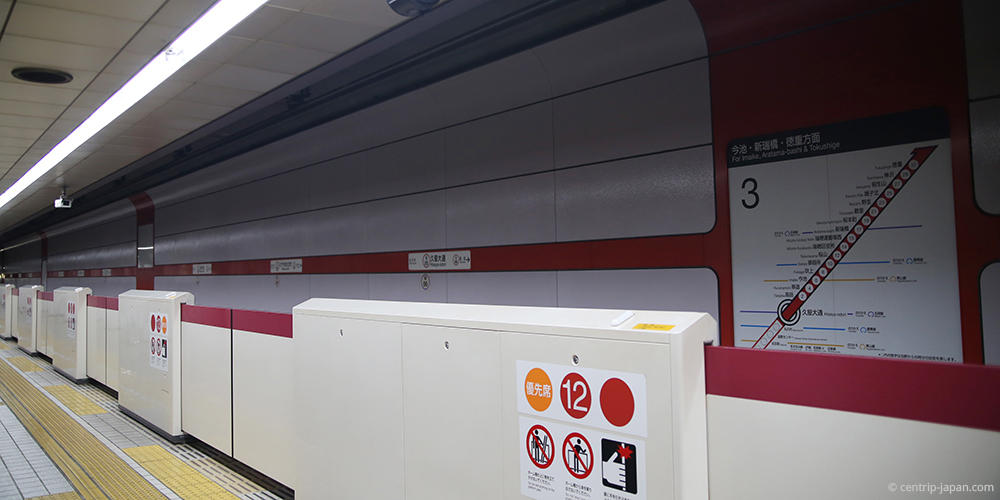 There are a number of other, smaller lines which branch off from the major lines. Of these, the Meiko line is the one you are most likely to use so we will introduce it first.

The Meiko (purple and white) line is a line which uses the same track as the Meijo (purple) line, but which branches off at Kanayama and goes to Nagoyako (the Port of Nagoya). To tell which is which, look at the front or the side of the train. If it is heading for Nagoyako (名古屋港) then it is a Meiko line train. Otherwise, it is a Meijo line train. With one or two exceptions, Meijo line trains do not list a station as their destination. Instead, they will be marked as moving clockwise (右回り) or counterclockwise (左回り). This is the easiest way to avoid confusion over the two lines. Generally speaking, a Meijo line train is followed by a Meiko line train, so it is unusual to wait long for either.


If you get on the wrong train, you can get off at Kanayama and then change to the correct line. If you pass Kanayama and find yourself going to the wrong station, just get off at the next station, cross over to the opposite platform and head back to Kanayama. As long as you do not exit the station, you will not have to pay any extra fee for doing this.


The other lines are unlikely to be used by visitors, but we include them for information purposes.

This line splits off from the Meijo Line at Heian-Dori (平安通) station. Technically, it only consists of one stop, which is to Kami-Iida station. After this station the line changes its name and goes out somewhat further than other lines to places like Inuyama (a popular destination for its castle). Following this line all the way actually brings you back to the Kami Otai, the first / last station on the Tsurumai line.

The Aonami line is technically not a subway station, as it runs above ground, but it is featured on the subway maps. It starts at Nagoya station and runs out to Kinjo-Futo. The main stations of interest are Nagoya Keibajo Mae (名古屋競馬場前) which is the nearest station for the Nagoya Immigration Bureau, and the final stop, Kinjo-Futo, for the recently-opened Legoland.

This line, again not technically part of the main subway system, starts at Akaike, the first / last stop on the Tsurumai line, and continues through to Toyota.

There are a number of ways to pay for the subway.

A standard ticket is valid for a single journey between two stations (inducing transfers, if needed). This ticket can be purchased from either of the following two machines. 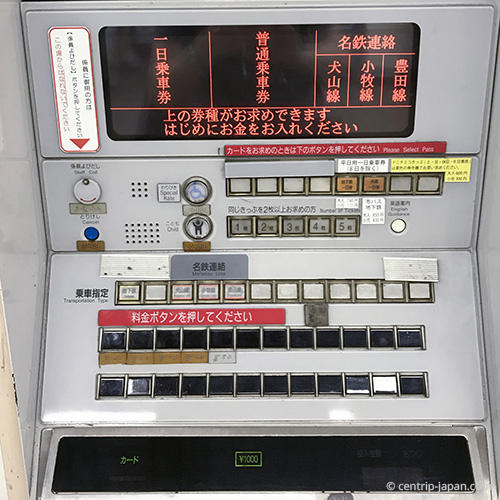 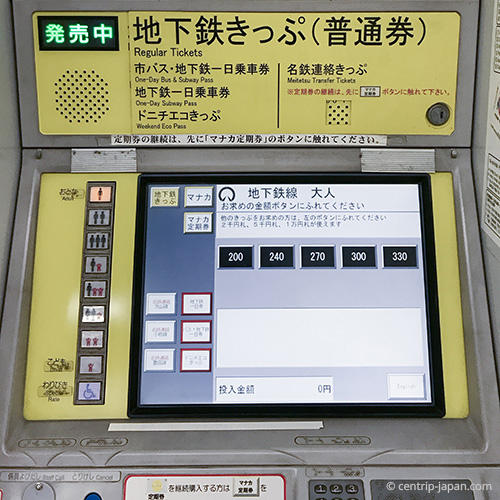 Note that when buying a ticket, you do not choose a destination but a price, which increases with the distance of the journey. The subway map will list the prices of each station from the station you are currently at (example : Nagoya to Sakae is 200 yen, Nagoya to Meijo Koen is 240 yen, etc). 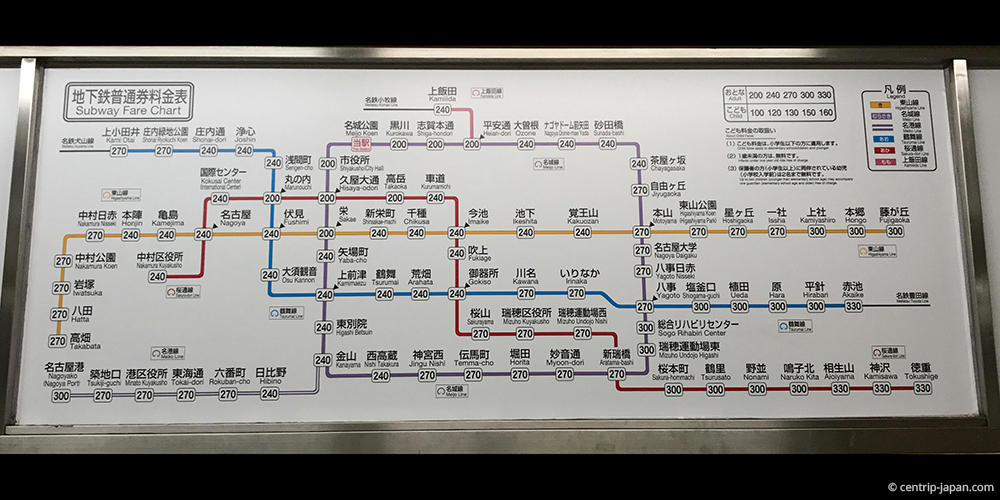 In the event that you accidentally buy the wrong price ticket, you can adjust it at any station before exiting by using the following machine. 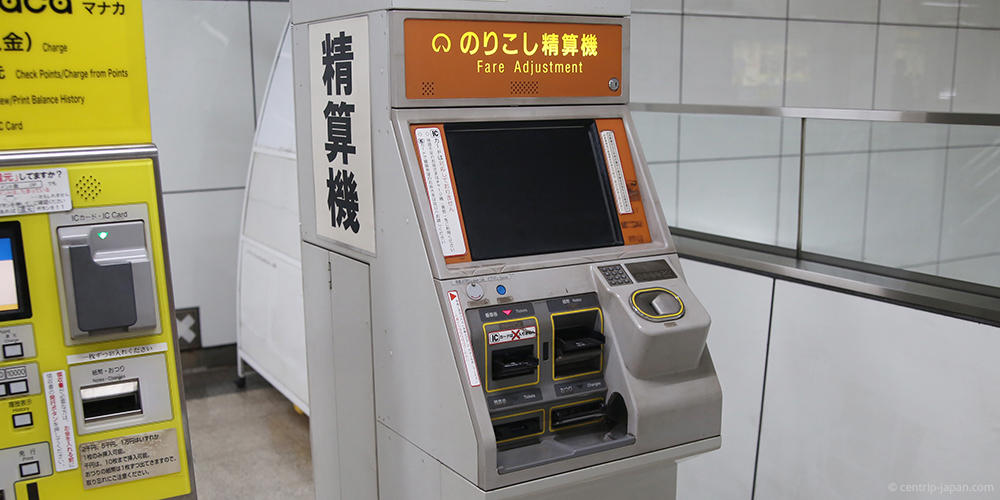 There are three types of daily pass which can be purchased from stations.


a) The daily pass for the subway only. This costs 740 yen and allows you to use all the main subway lines (Higashiyama, Tsurumai, Meijo / Meiko, and Sakura-dori) unlimited times in a day.

c) The Donichi eco pass. This costs 600 yen, does the same as the daily pass for subway plus bus, but can only be used on weekends, public holidays, and the eighth of every month. (It can also be used to get discounts on entry to certain attractions in Nagoya).


All three passes can be purchased from the ticket machine.

The Manaca card or similar

This is less likely to be of use to a visitor, but it is worth mentioning. The Manaca card is a card which you charge with cash and use to enter and exit the subway (like an Oyster card in London, if you’re familiar with this kind of system). 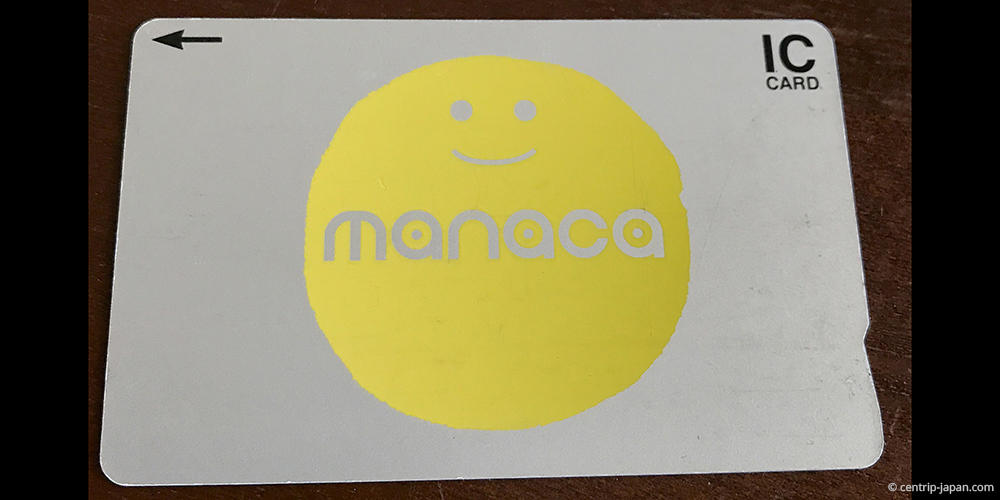 It can also be used to make purchases in some stores. You can purchase and charge a Manaca card using the ticket machine.


If you are visiting Nagoya from another part of Japan and have a similar card (such as Tokyo’s Suica card), then you will also be able to use that for the subway, as it was quite recently decided to allow these cards to work in other local subway systems.