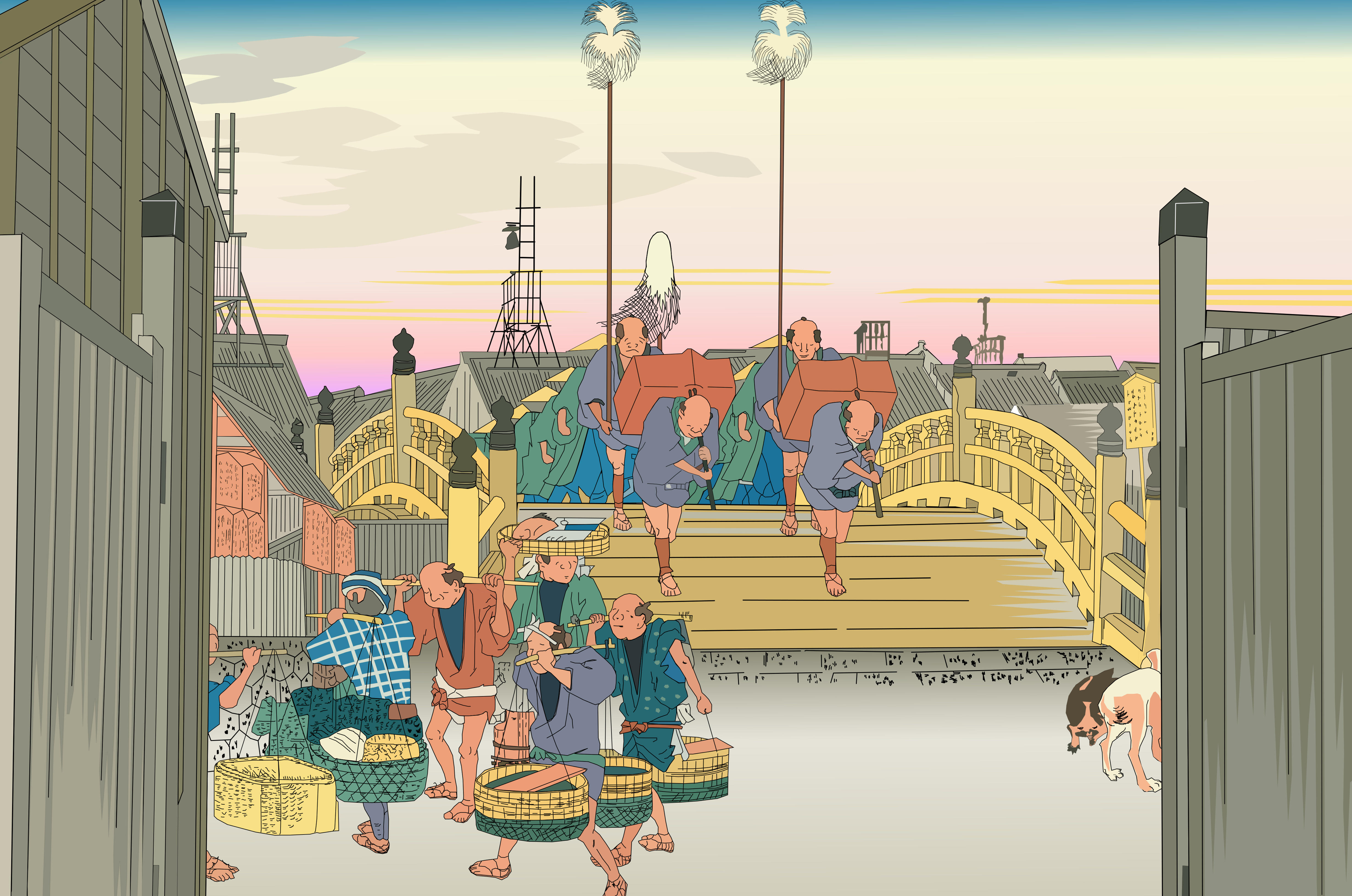 A Tale of Two Lakes

A Walk Along the Coast

The most important road of Japan's Edo Period (1603–1868) was the Tokaido. The government-regulated highway originally consisted of 53 post towns (related to the 53 Buddhist saints that Buddhist acolyte Sudhana is said to have visited on his path to enlightenment). This road stretched from Edo (modern-day Tokyo), through Nagoya, all the way to Kyoto. Each post town along the Tokaido was a place to regulate traffic and a chance for weary travelers to rest themselves and eat. In good weather, the trip from Edo to Kyoto could be done in a week. In bad weather, the trip could take up to a month.

The numerous post towns on the Tokaido each had their own local flare. They developed unique foods and culture over the years. Travelers carried word of the different towns' interesting characteristics and guidebooks chronicling the various towns were even produced. Even in modern times, the unique culture that sprang up from this post towns remains.

There are two lakes situated near the ends of the Tokaido, Lake Hamana in the east and Lake Biwa in the west. In those days, the word umi meant "lake". Totoumi, or "far lake" was the name given to the area surrounding Lake Hamana in modern-day Shizuoka Prefecture. To someone living in Kyoto, Lake Hamana was far away. On the other end of the Tokaido, closer to Kyoto, was the area around Lake Biwa known as Oumi, or "near lake". This area became modern-day Shiga Prefecture.

Our journey down the Tokaido begins in Totoumi (Shizuoka Prefecture). We will learn about the unique food culture born out of this area, some of which is deeply tied to Lake Hamana. After that, we'll travel to Owari (modern-day Aichi Prefecture) to witness the spectacle that is sumo. From there, we'll venture into Mino (Gifu Prefecture), home of the greatest sword makers in Japan and learn about their rich tradition. Finally, we'll make our way to Oumi (Shiga Prefecture), where you'll find Lake Biwa, the largest lake in Japan, and quite possibly the oldest one on Earth. Our journey will end with a chance to explore the natural beauty of Japan's countryside.

A Long Time Ago, In a Lake, Far, Far Away

We begin our tale in Totoumi, not far from Lake Hamana, in present-day Shizuoka. Shizuoka produces over 40% of Japan's green tea. Green tea has been cultivated here since the 1200s. It is widely considered to be the Mecca of tea in Japan. Even if you've had green tea back home, nothing compares to a fresh brewed with Shizuoka tea leaves.

While you can drink fresh tea in Shizuoka, why not take it to the next level and pick some tea leaves yourself? There are a number of places in Shizuoka where you can wade out into the tea fields and experience what it's like to pick fresh tea leaves with your own hands. It's a great chance to learn how that delicious green tea winds up in your cup. For those looking to for an artistic tea experience, Shizuoka is also the perfect place to try a Japanese tea ceremony.

Visitors to Japan might be familiar with potstickers. While seen as Chinese food in the West, Japan has made potstickers its own thing. Hamamatsu, in Shizuoka, is known for having some of the best. These potstickers are called gyoza in Japanese. If you're already a fan of these delicious dumplings, you'll be in heaven. If you aren't already a fan, here's your chance to try the best. They're usually filled with vegetables, so health-conscious travelers will enjoy these as well. Check out the links below for a some great gyoza restaurants near Hamamatsu Station.

If you're ready to step out of your culinary shell, or you're already an adventurous eater, the thing you definitely need to try in Hamamatsu is unagi. Unagi is the Japanese word for freshwater eel. It's usually grilled, smothered in barbecue sauce, and served over rice. Lake Hamana is said to have the most delicious unagi in all of Japan. If you're going to eat this beloved Japanese dish, there's no better place to try it than in Hamamatsu. Eastern and Western Japanese have slightly different styles of preparing unagi, with it being steamed as well in the eastern Kanto Region. Since Shizuoka sits in between the two areas, you'll find both styles of unagi served here.

Maruhama (Japanese) (next to Hamamatsu Station)

As travelers during the Edo Period neared the end of the Tokaido, they would ultimately arrive in Oumi (modern-day Shiga Prefecture) and pass by the largest lake in Japan, and possibly the oldest lake in the world, Lake Biwa. The first time you lay eyes on Lake Biwa, you can be forgiven for thinking you've hit the ocean. It's massive. Depending on which part of the lake you're at, as you look out across it, you can't see the other side.

The unique food culture of Shiga is centered about fermented foods. The area has a rich tradition of cooking with freshwater fish from Lake Biwa, creating its own brand of sushi using fermented fish (to help with long-term preservation). The local type of sushi is called funazushi, and is made using fermented buna [crucian carp] fished from Lake Biwa. It has a sharp and vinegary flavor that lovers of bleu cheese will surely love! Funazushi is often presented as a gift. Long ago, it was used as an offering to the gods at Shinto shrines and later it was given to the shogun in Edo because funazushi became a favorite of the shogun's family.

Raise Your Glass in Oumi

Shiga is home to some excellent alcoholic drinks. You'll find craft beer, unfiltered wine, and a whiskey distillery. While you're in town, checking out these wonderful local brews is highly recommended. These places are a little bit off the beaten path, but well-worth checking out if you have time.

Get Back to Nature

The Lake Biwa area isn't all about eating though. There's a lot of beautiful nature to explore here as well. The best way to experience Lake Biwa is on a bicycle. There are rental cycle companies located by the lake that offer not just bikes, but also tours of the nearby countryside. You can make your way around the lake on a bicycle, enjoy the scenery and local cuisine, or head out away from the lake and check out some of the historical places around the area. There are farms, temples, and shrines to be explored.

The End of the Road

From the beginning of our journey in Shizuoka, all the way through Aichi, Gifu, and Shiga, you've seen the rich history, culture, and cuisine that Central Japan has to offer. There are unique foods to be eaten, traditional sports and crafts to master, and a host of natural scenery to be amazed by the sight of. The heart and soul of traditional Japan are alive and well here, just waiting to be explored.