International Tourist Destination Takayama: The effects of COVID-19 and the path to tourism recovery.

Takayama City in Gifu Prefecture is a popular tourist destination and a very successful model for inbound tourism. What impact has COVID-19 had on Takayama, and what path will they take to tourism recovery? The following article is from an interview with Hiromasa Hatajiri, Manager of Takayama City's Overseas Strategy Division, in charge of Takayama's inbound strategy. 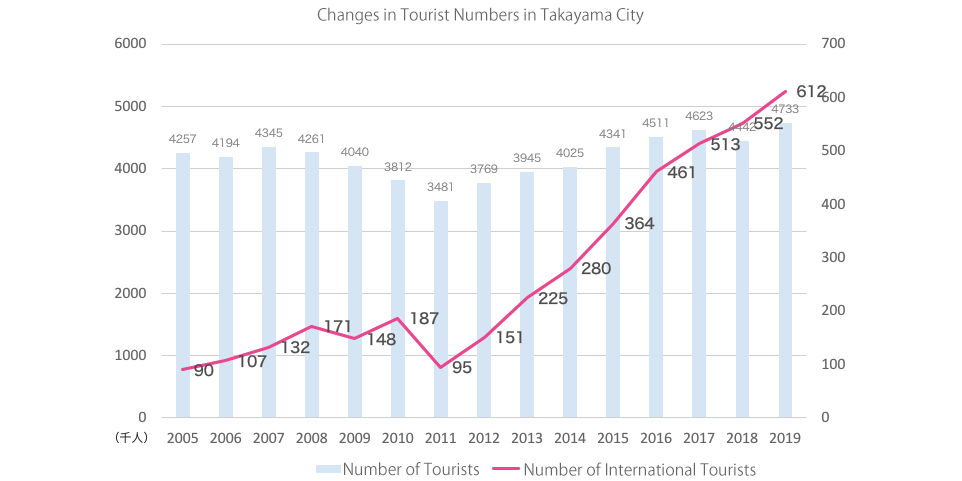 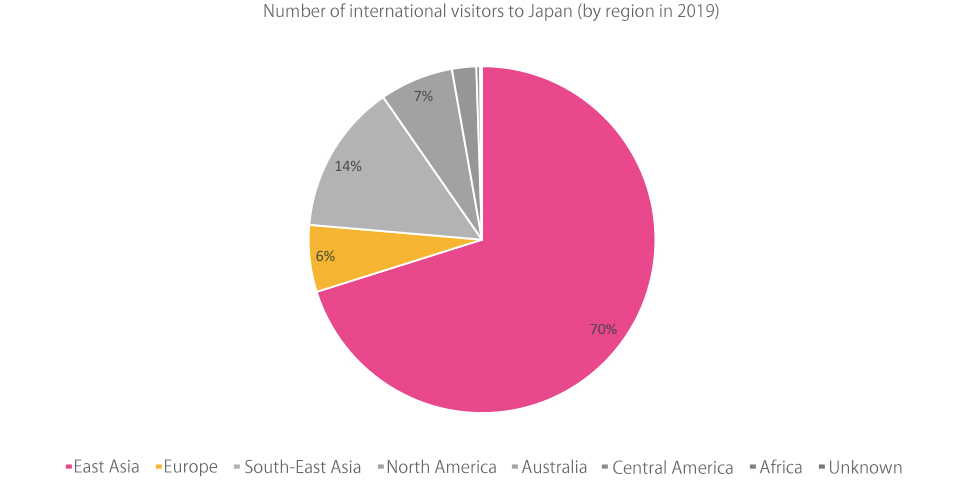 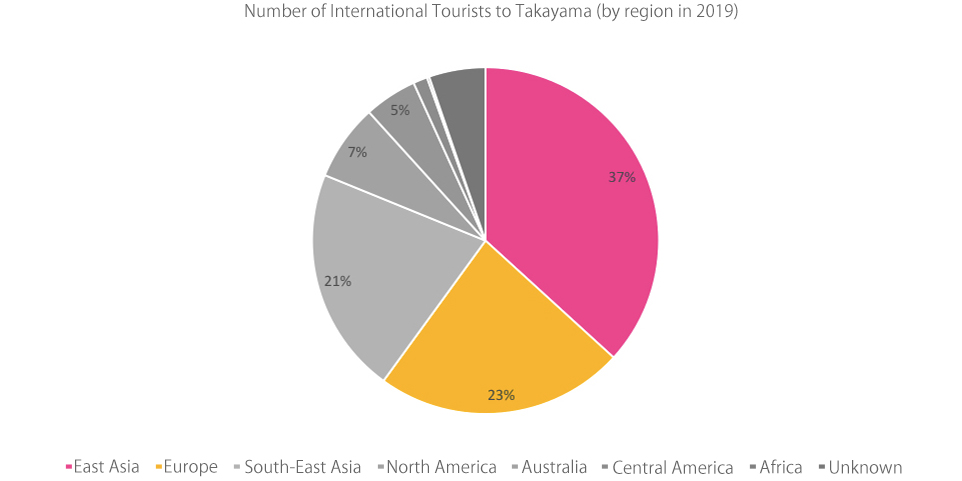 2. How has Takayama Succeeded in Attracting Inbound Tourism?

Takayama City is often introduced as a successful model for inbound tourism and has been working hard to attract international tourists long before the term inbound tourism came into the spotlight. In 1985 Takayama declared itself an international city long before Japan declared itself a tourist nation in 2003. In addition to launching a multi-language website in 1996, Takayama's history of working together with both the public and private sectors to attract international tourists for over 30 years speaks for itself.

Taking a look at recent inbound-related policies shows several measures implemented in recent years. They include the introduction of multilingual websites and printing multilingual pamphlets, developing Wi-Fi networks, and training interpreter guides. Also, the formation of area-wide tourism routes, such as the Sugihara Chiune Route and the Hokuriku-Hida-Shinshu Three-Star Highway, was developed in cooperation with transportation systems and development in overseas sales markets.
While these steps are nothing new, the content and extent of supported languages and their quality is quite impressive. 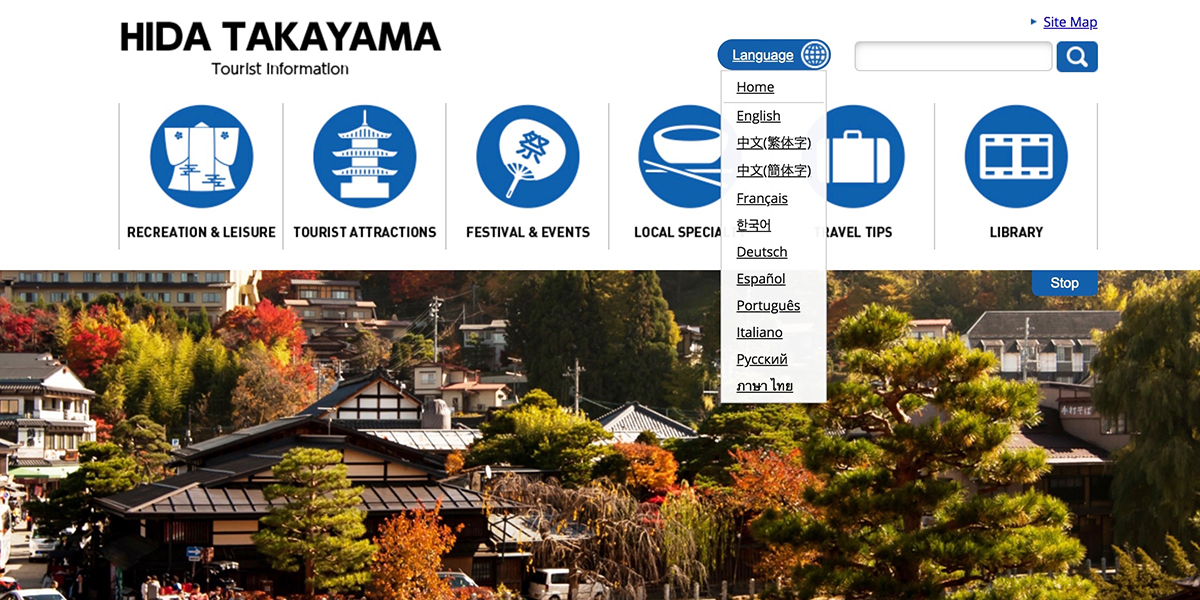 Their website is available in over 11 languages, has multilingual pamphlets in 10 languages, and walking maps in 11 languages.
With the content and structure of the multilingual brochures localized for each language, the cover photo, the design, and the volume of text are all designed to make it easier for the reader to pick out information in their language. For example, the image used for Southeast Asian countries is a snowy winter landscape, and for South Korea, where mountain-climbing is in vogue, they use the Hida mountains. In the German-language version of the magazine, there are fewer photos, and a greater focus is on written content.

Takayama is also welcoming to Muslim tourists and participates in the Muslim Friendly Project undertaken by businesses in Takayama City. They created a map in English and Indonesian that introduces halal restaurants and facilities for prayer. 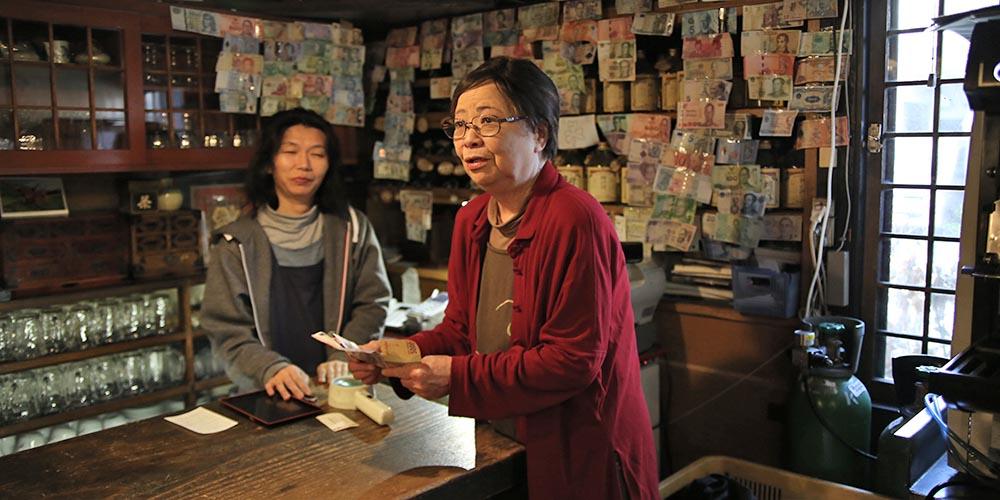 Bills from various local currencies, given by guests in gratitude, cover the walls of the famous restaurant Kyoya.

According to Mr. Hatajiri, Director of the Overseas Strategy Division of Takayama City, one of the main reasons Takayama's success with these measures is the welcoming and respectful attitude that the people of Takayama have for visitors. The welcoming nature of Takayama has spread by word of mouth on social media and works to attract new visitors to Takayama. 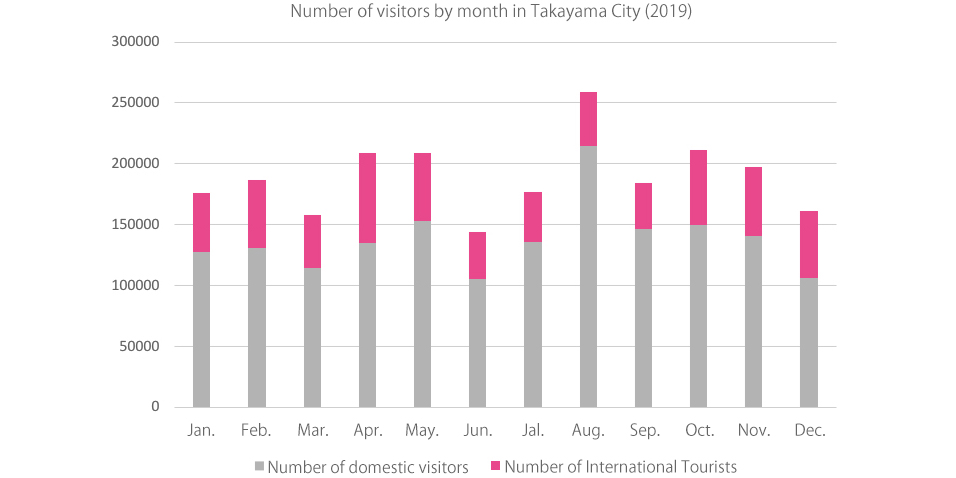 Takayama has a substantial advantage in attracting inbound tourists because they can bring visitors in during weekdays and seasons when there are few Japanese tourists. It works to level out the peak tourist season, and in turn, benefits local businesses involved in the city's tourism industry. Since many locals welcome international visitors openly, Takayama has developed as an international tourist destination without any issues.

3. COVID-19 and its Impact on Takayama Tourism 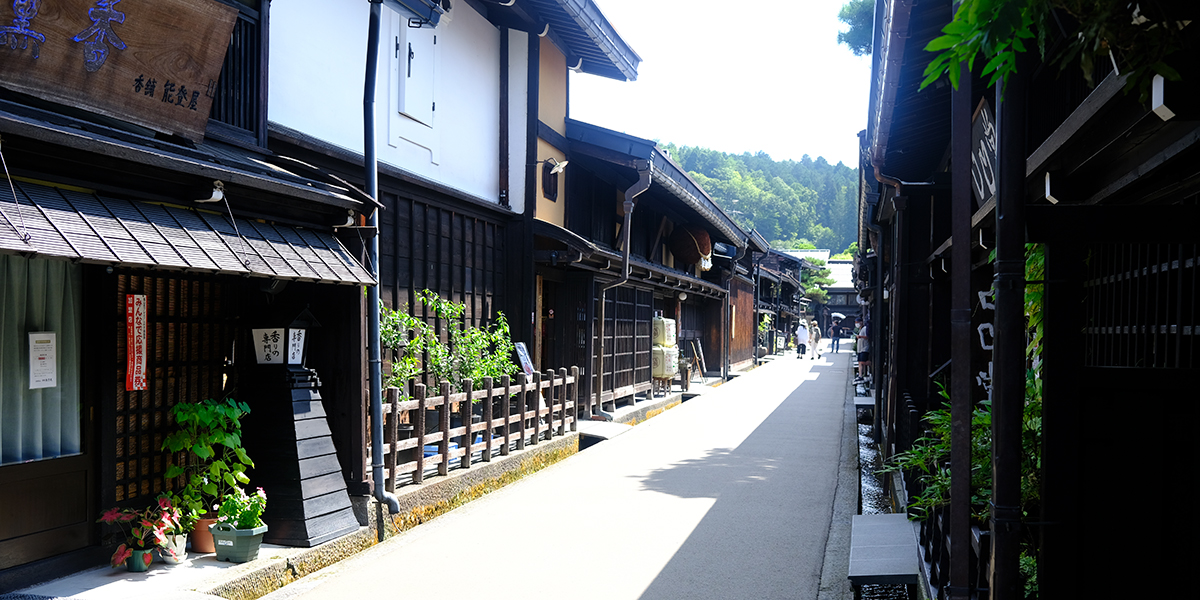 A sparsely populated area in Kamisannomachi.

However, with the spread of the new coronavirus, the city of Takayama has changed drastically. When I visited at the end of August 2020, the streets crowded with foreign tourists a year ago, even on weekdays, were deserted, with only a few Japanese, presumably residents around.

Compared to last year, Takayama was off to a strong start when we take a look at the tourist numbers in the first half of 2020. The number of visitors in January alone exceeds that of the previous year. In February, when the effects of the new coronavirus began to appear, early numbers declined, halving in March, and dropping by more than 90% in April and May, when the state of emergency was declared, with June showing a slight recovery. On the other hand, if we look only at international visitors, the impact is even worse with a 90% decline as early as March, and almost catastrophic figures since April that continue to this day.

Directly impacted industries suffering from the decline in tourism are mainly in the lodging, food and beverage, and retail industries. However, because tourism is deeply integral to Takayama, it has a tremendous impact on the entire city. The economic impact of overall tourism to Takayama City in 2019 was estimated to be about 215 billion yen, of which foreign guests accounted for 20.7 percent or about 44.5 billion yen. COVID-19 is threatening Takayama with an enormous economic deficit.

With the recovery of inbound tourism still in sight, Takayama City faces the difficult task of maintaining their image in overseas markets in preparation for post-COVID-19 travel, while at the same time attracting domestic tourists once again.

Takayama is in the process of examining multiple promotion strategies, divided into three phases. One where travel restrictions will continue, another where entry restrictions will be gradually relaxed, and finally one where the country lifts entry restrictions. For the time being, the city plans to focus on countries located close to Japan, such as Thailand, Taiwan, and Australia.
Changes had to be made, like canceling travel expos in Taiwan and Austria, and planned promotional events. The cancellation of the travel expo, which was likely to lead the development of specific tours, is a big blow, Takayama, is trying to make up for it by focusing on digital promotion to maintain the Takayama brand. 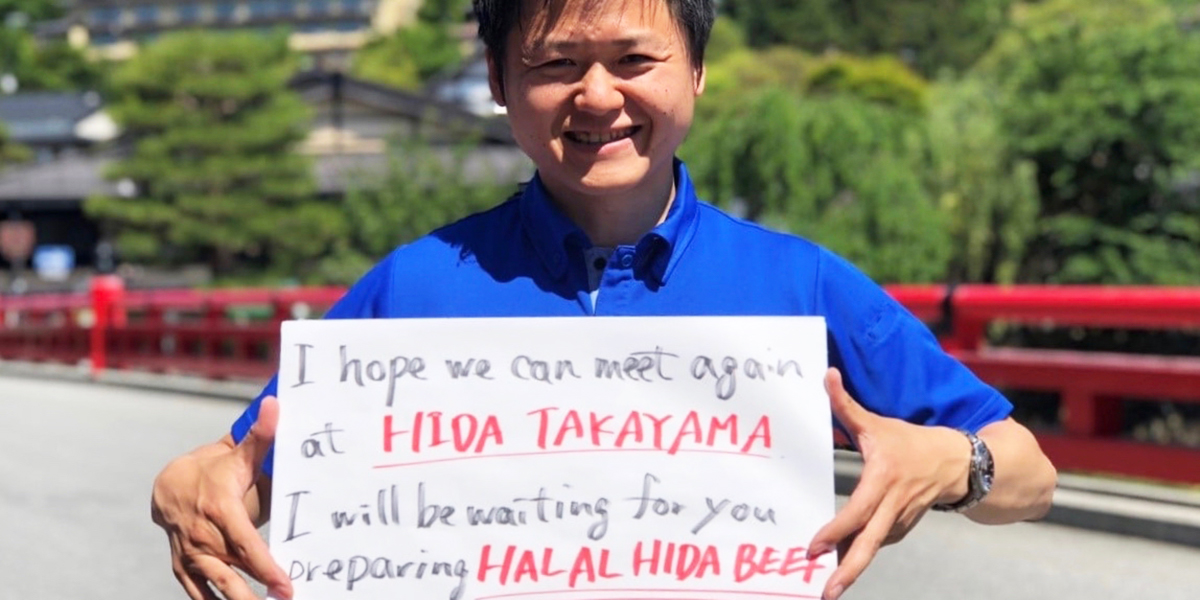 The city's Facebook initiative is impressive. On the official Facebook page of Takayama City, Visit Takayama, there is a series called Shining People. The series highlights the people involved in Takayama's tourism industry and sends a message to the rest of the world that they were ready for people to come back to Takayama after the corona crisis ends. Behind this project is the belief that the "people" of Takayama, not just the buildings and streets, have built and supported the growth of tourism in Takayama. While it is difficult to travel overseas now, the city is also doing promotions by using YouTubers living in Japan. In a series of promotions, they feature the suburbs and outdoor areas increasingly, with content designed with COVID-19 in mind, and avoiding the three C's(Closed spaces, crowded places, and close-contact settings).

The Takayama City Overseas Strategy, was compiled in April 2020 when the effects of the new corona virus began to cast its shadow over the city. By defining an overseas strategy as "efforts to revitalize the local economy and ... raise awareness of multiculturalism," the city of Takayama has compiled a detailed list of policies related to its overseas strategy. These range from attracting foreign tourists to revitalizing international exchange. Interestingly, an indicator of success in these policies is the Citizen Satisfaction Index that emphases the opinion of the citizens over concrete numbers with categories like: how many residents feel that the city is buzzing with tourists, and the exchange between people and sale of goods is progressing. Laying the groundwork for prosperity by developing a town where diverse values intersect is rooted in Takayama and not by short-term economic revitalization efforts, such as increasing the number of tourists or how much money tourists spend. 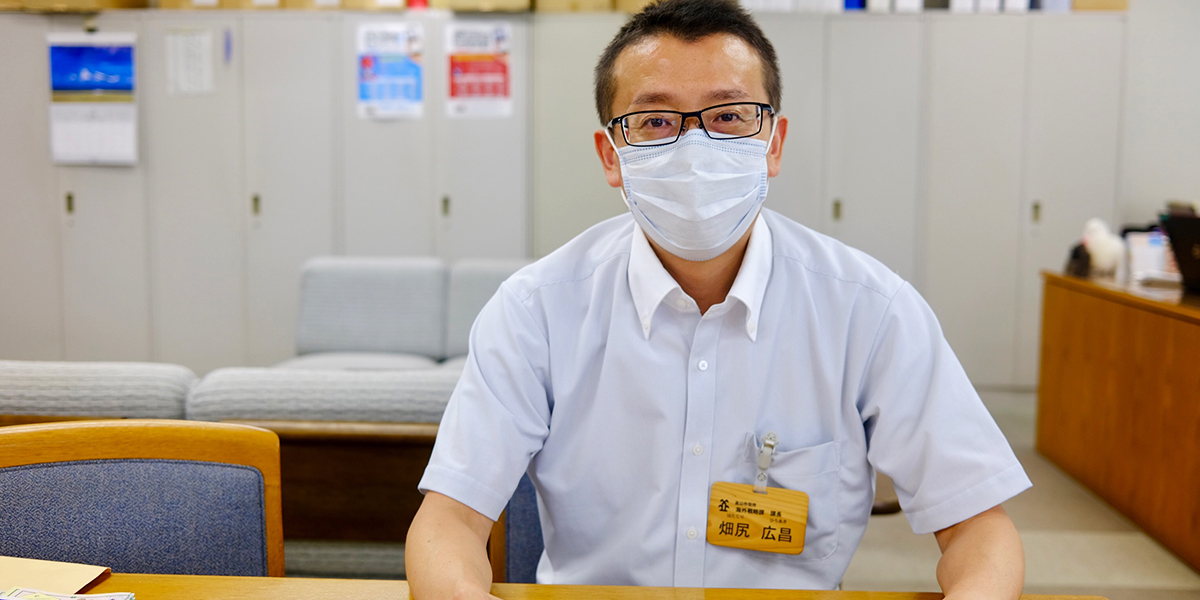 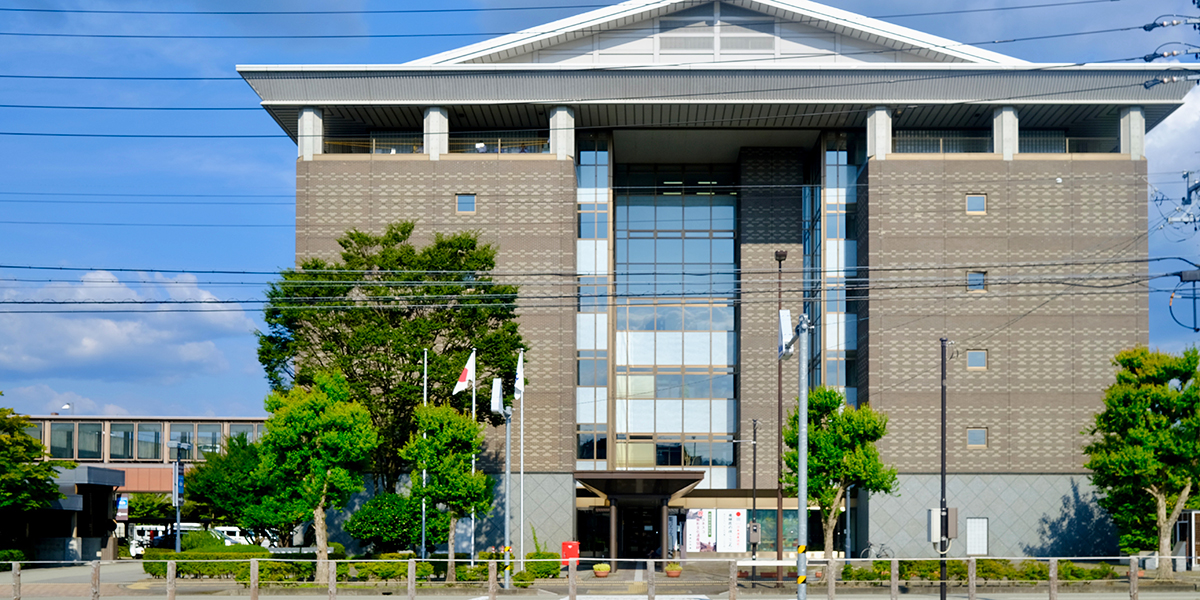