Iga, the Ninja's hometown, is the best place to meet ninja. Many attractions are focused on ninja; a ninja museum to visit, ninja shows to watch, and ninja costumes to walk around. Iga is also home to a beautiful castle called Hakuho, also known as White Phoenix Castle, and the Danjiri Festival registered as an intangible cultural heritage by UNESCO. Join us as we take a walk around Iga!

From Nagoya, it takes about 1 hour and 40 minutes by bus to get to Iga. If you go by train, take the JR Kansai Main Line, change trains at Kuwana Station, and go to Ueno-shi Station on the Iga Railway via Iga-Kobe, your destination. The journey takes about two hours. Also, if you buy an Iga Ninja Liner Ticket, it includes admission tickets to various facilities in the Iga area. 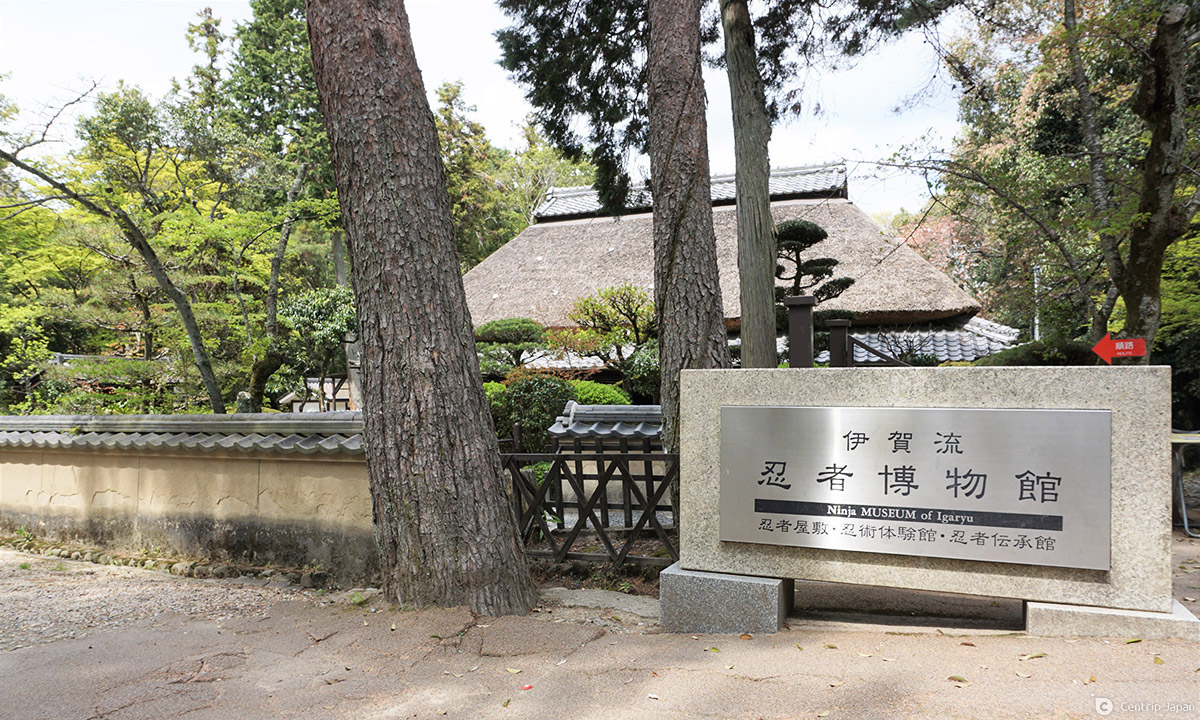 Walk 10 minutes from Ueno-shi Station on the Iga Railway, and you'll arrive at the Iga-ryu Ninja Museum in Ueno Park. The "museum" is an area of the park that includes a ninja house, a reference museum, and a show. 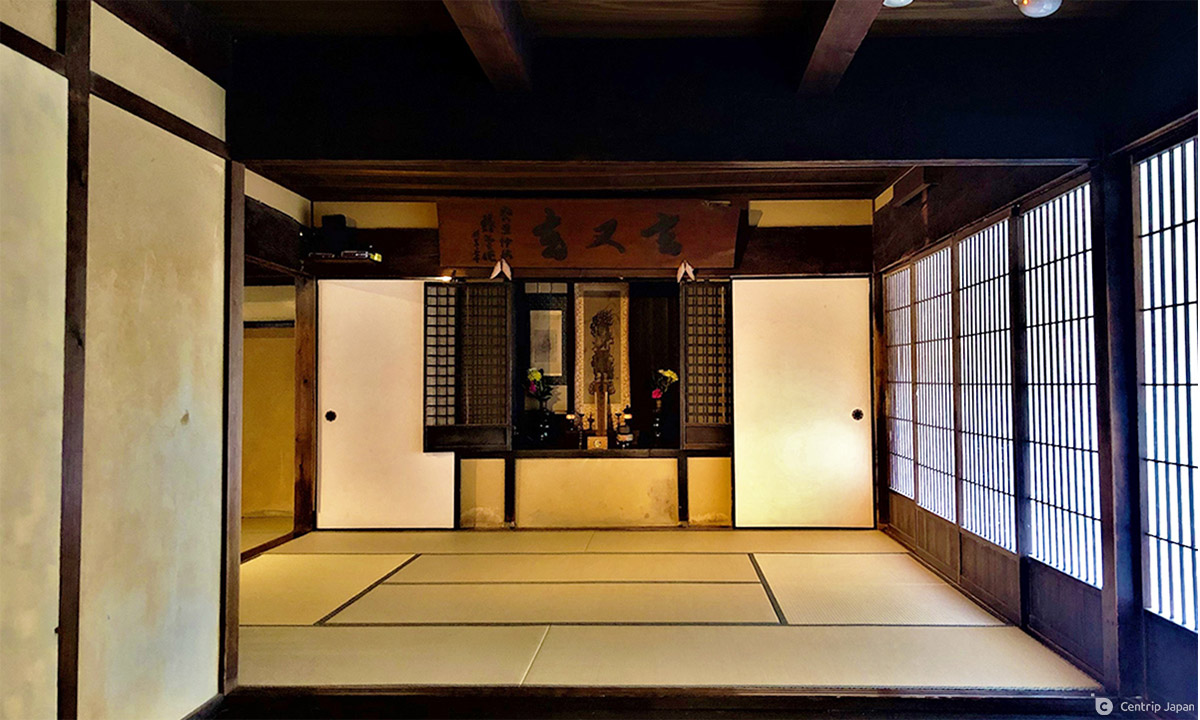 The ninja house hides many secret ninja techniques. The task of all ninja was to gather information for their lords. So they avoided confrontation and relied on secrecy and subversion. Ninja homes held many secrets to help them escape danger in case they were discovered and attacked. 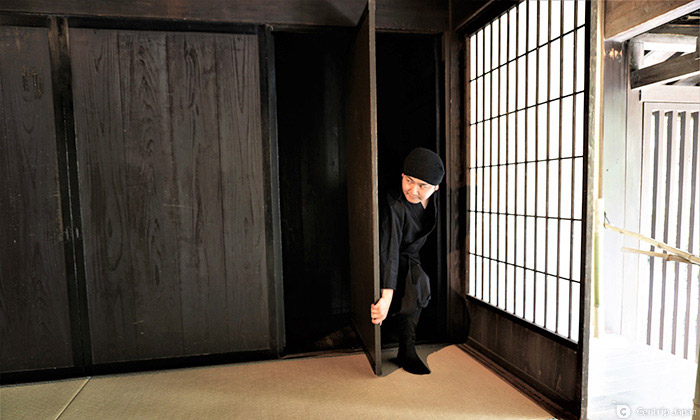 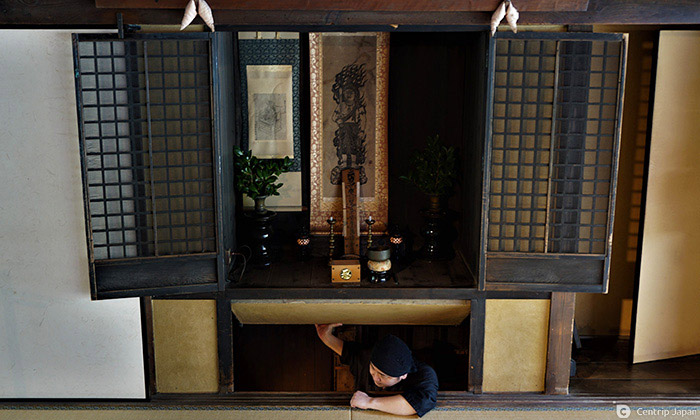 The walls hide secret doors as well as the Buddhist altar. Many other secrets lie in wait for you to discover in the ninja house. 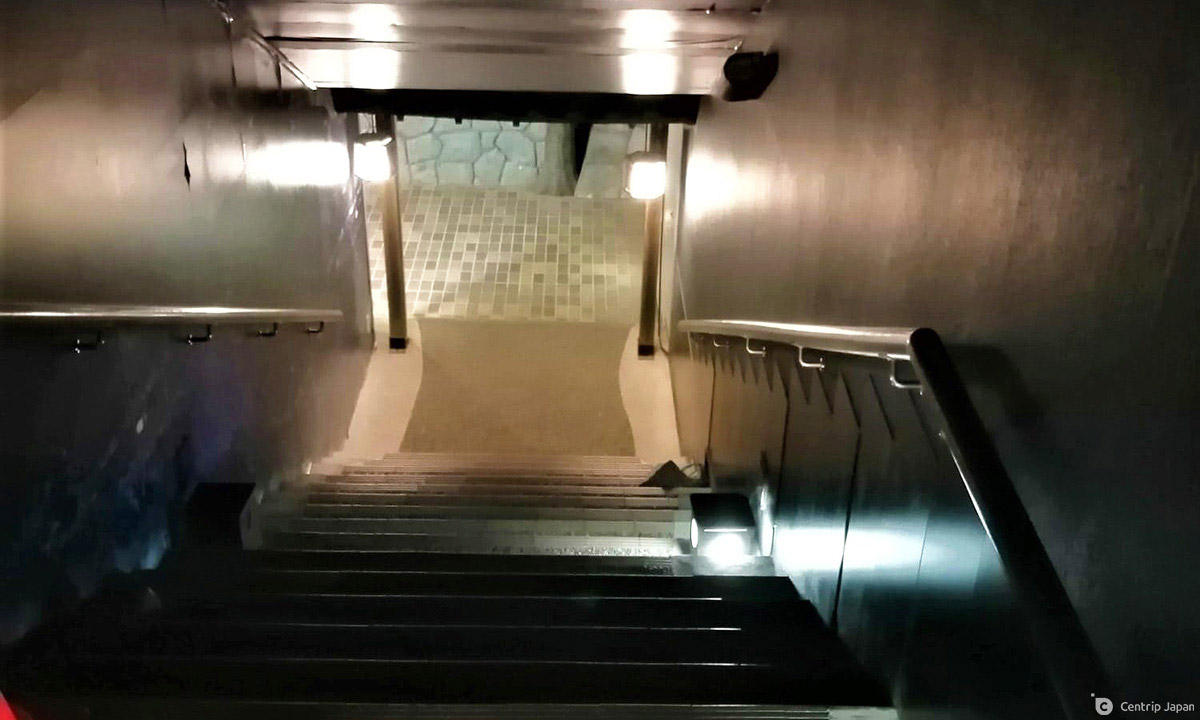 In the basement of the Ninja Trick Mansion is a reference room. 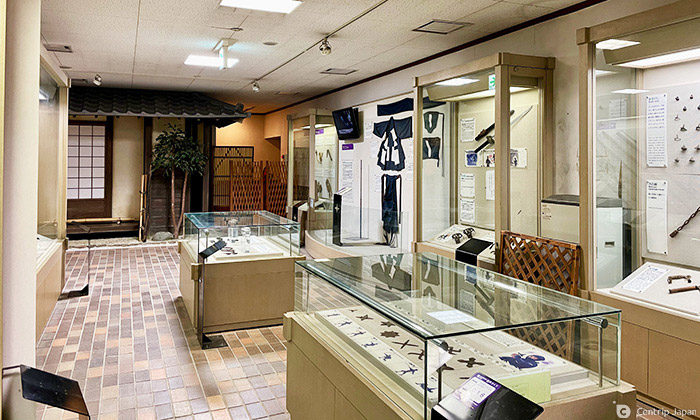 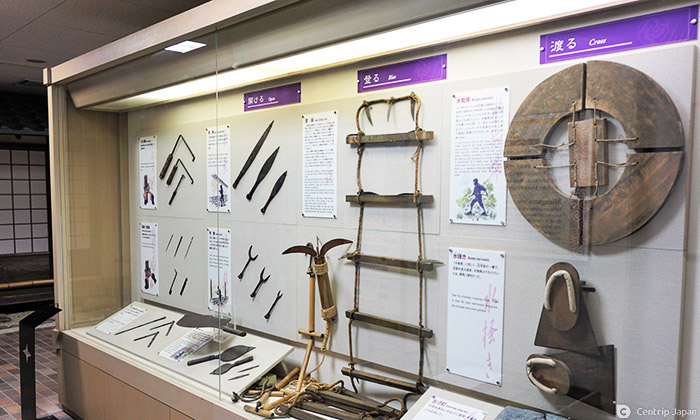 Here you can observe the tools used by the ninja and learn about the intricacy required to carrying out missions. 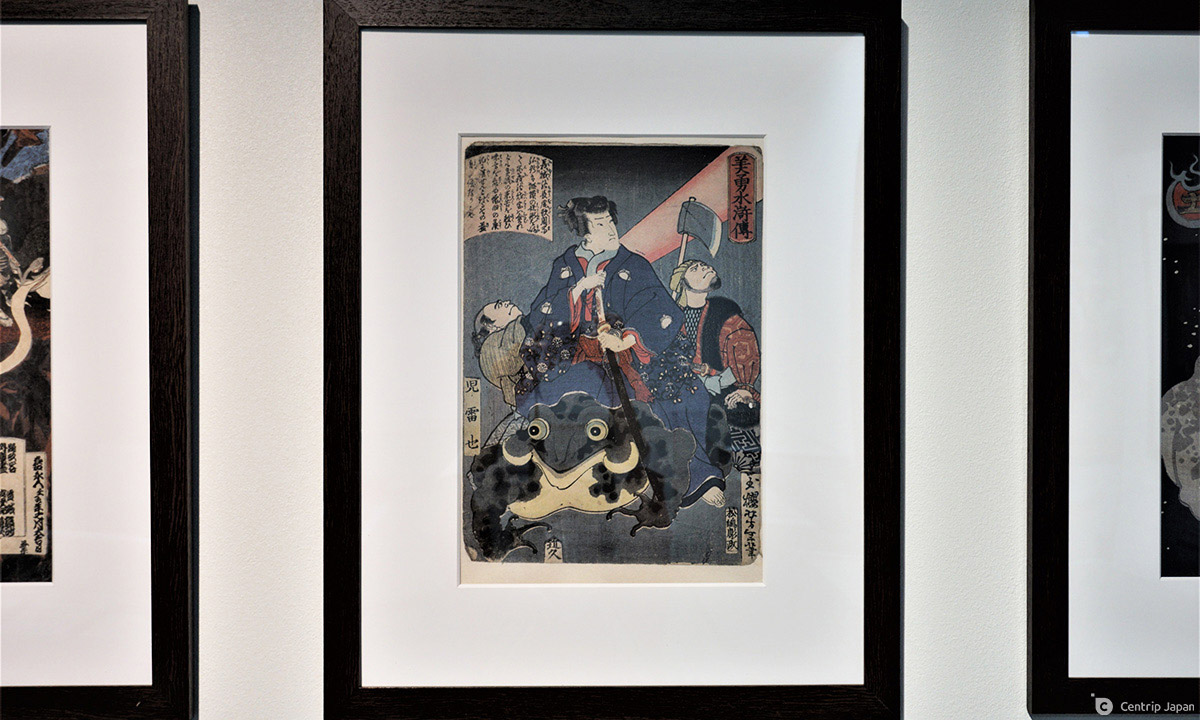 Now there is also a Nishiki-e display (Edo period ukiyo-e woodblock prints) of the ninja. The photo above is a Nishiki-e of Jiraiya. In the popular ninja manga, Naruto, the eponymous character rides a giant frog, as pictured above.

When you walk out of the reference museum, the entrance to the ninja show will be right in front of you. Currently, shows are only on weekends and holidays, so plan accordingly.

For more on ninja and behind-the-scenes action at the Ninja Show check out their YouTube channel .

Why not try out a Ninja eatery? 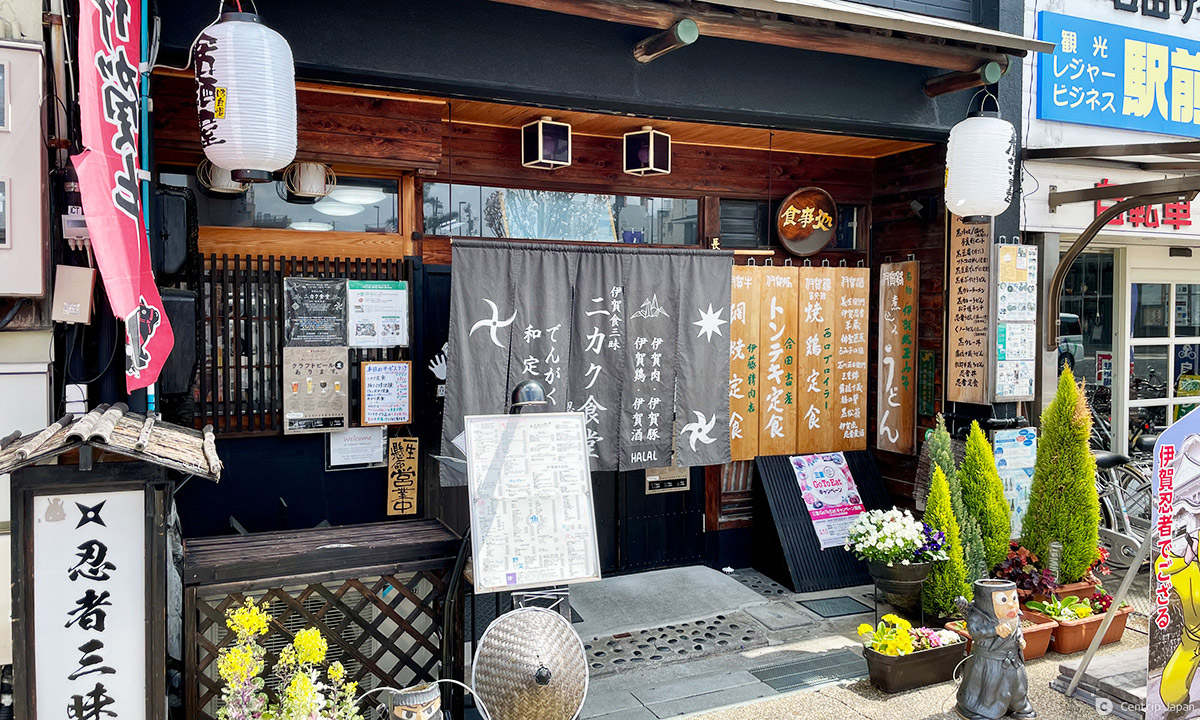 In front of Ueno City Station is Nikaku Shokudo , an eatery with a ninja motif. The entrance has a little ninja trick to it, but you'll have to visit to find out. 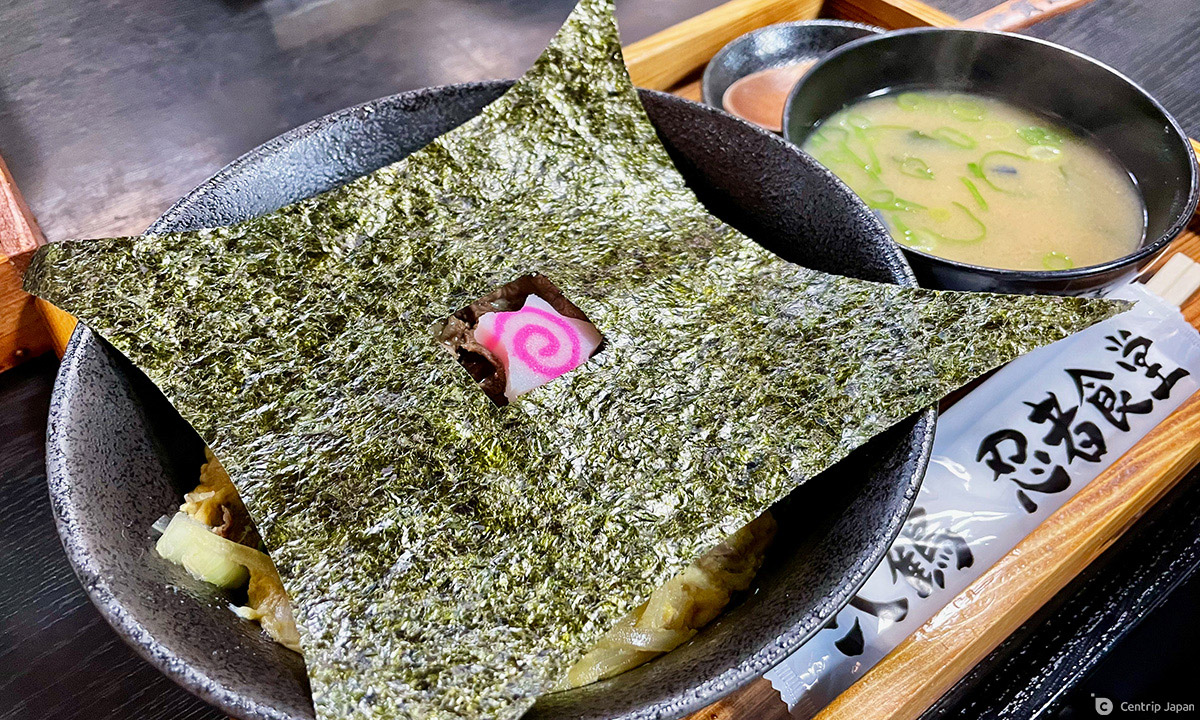 Taking a look at the menu, the Ninja Don really stands out! A bowl of rice topped with beef, egg, and "throwing star" seaweed makes for an exciting lunch for adults and children. Halal options and a prayer room are also available, so feel free to ask the staff if you require them.

Next to the Iga Ninja Museum stands Iga Ueno Castle in all its majesty. The massive tiles and white exterior walls make for a pleasing contrast. 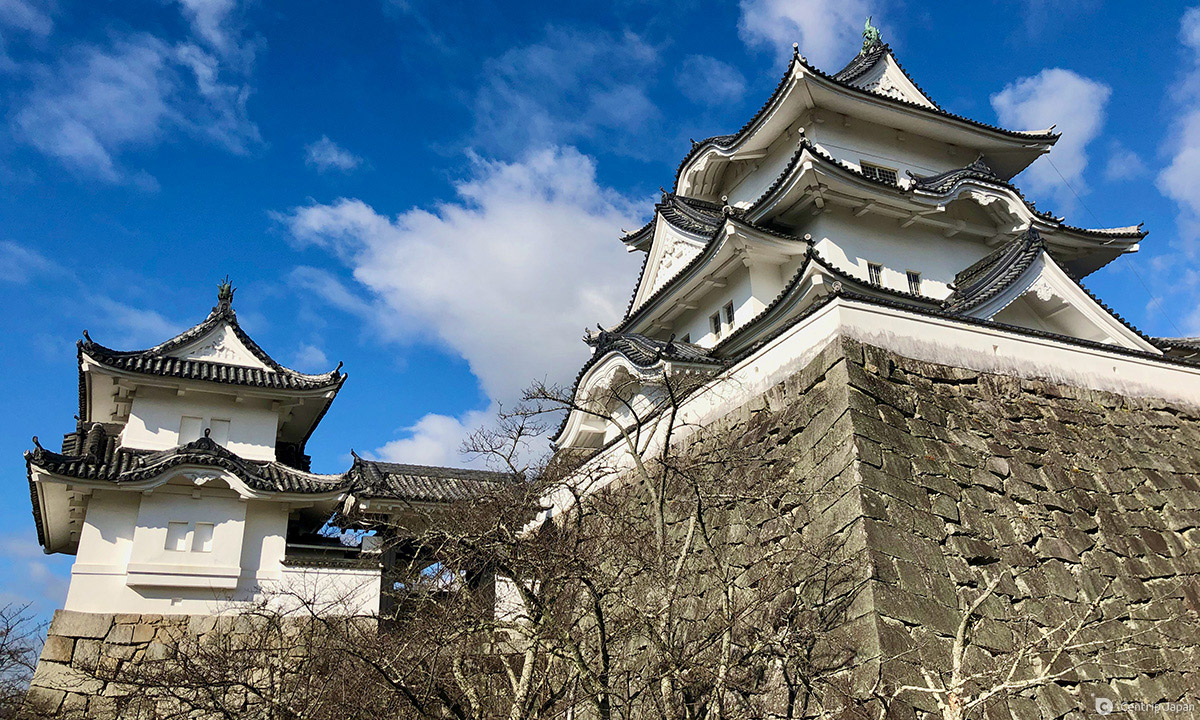 This castle has a long history, and its keep was rebuilt three times. The first time was to protect Osaka, the seat of government, in the late 16th century. The second time was in the following century. The old lord was replaced by Todo Takatora, who build the castle to stage attacks on Osaka. 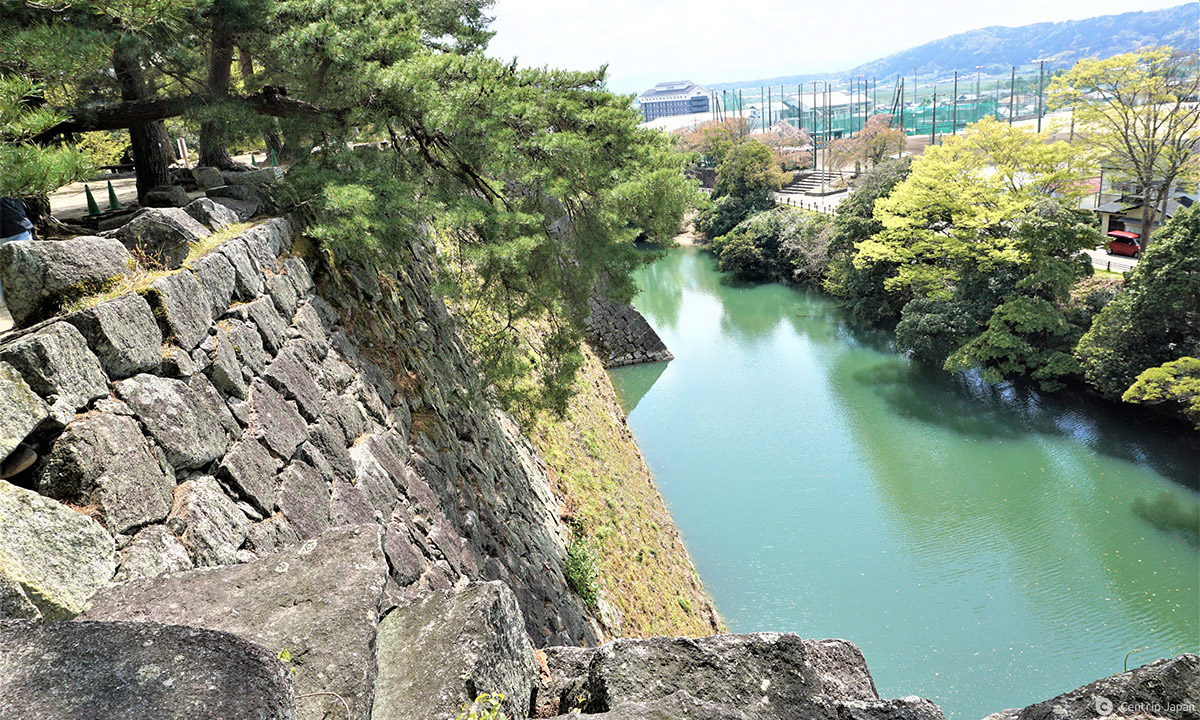 Takatora was a master castle builder, and during his tenure, they constructed the 30-meter high stone walls of Iga Ueno Castle. This castle has one of the tallest stone walls in Japan. 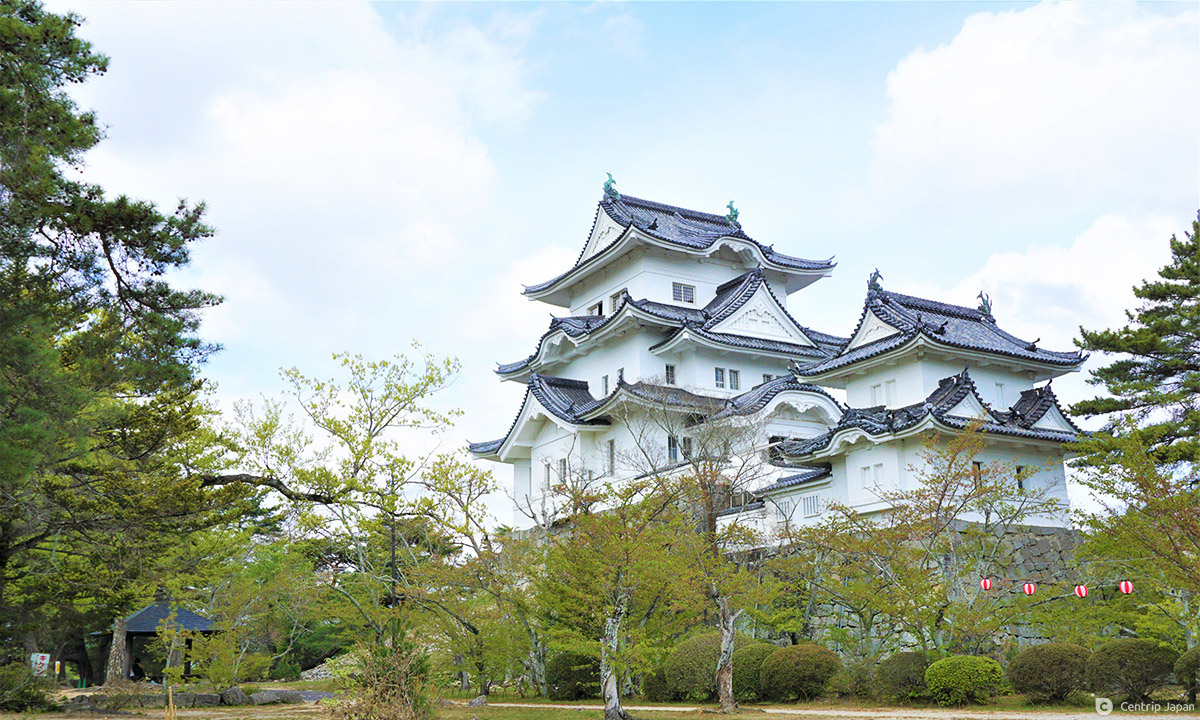 The third time they rebuilt the castle keep was in the early 20th century by a local delegate. The castle keep collapsed in a typhoon during Takatora's reign and had no keep for a long time. Katsu Kawasaki was a delegate from Iga, rebuilt it to promote the culture and industry of the area. This beautiful white castle, also known as Hakuho Castle (White Phoenix Castle), is a landmark of Iga. 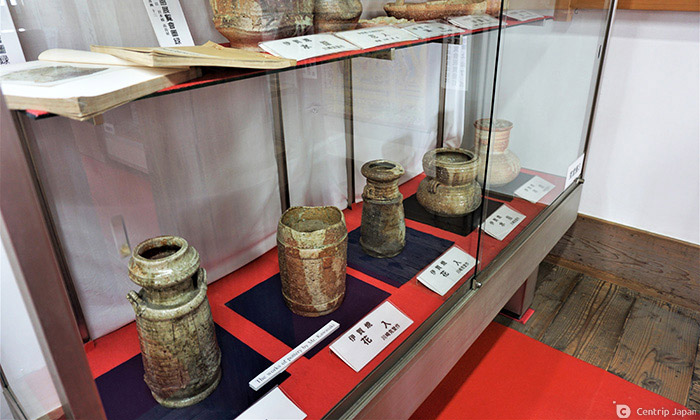 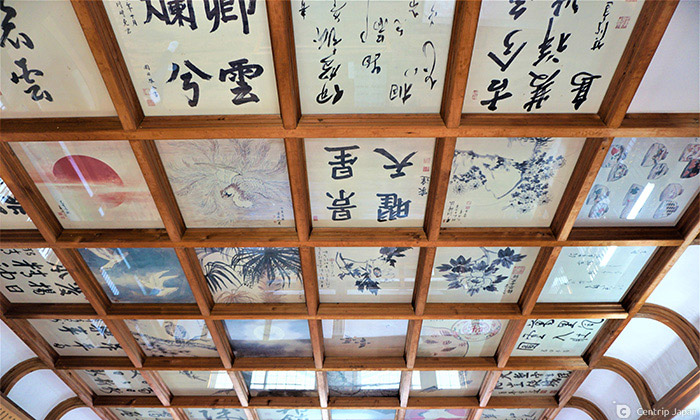 What sets Iga-Ueno Castle apart from other castles are the high ceilings, alongside displays of Iga pottery and samurai furniture. Papers donated and signed by famous painters, such as Taikan Yokoyama and the reigning prime minister, cover the ceiling of the top floor. 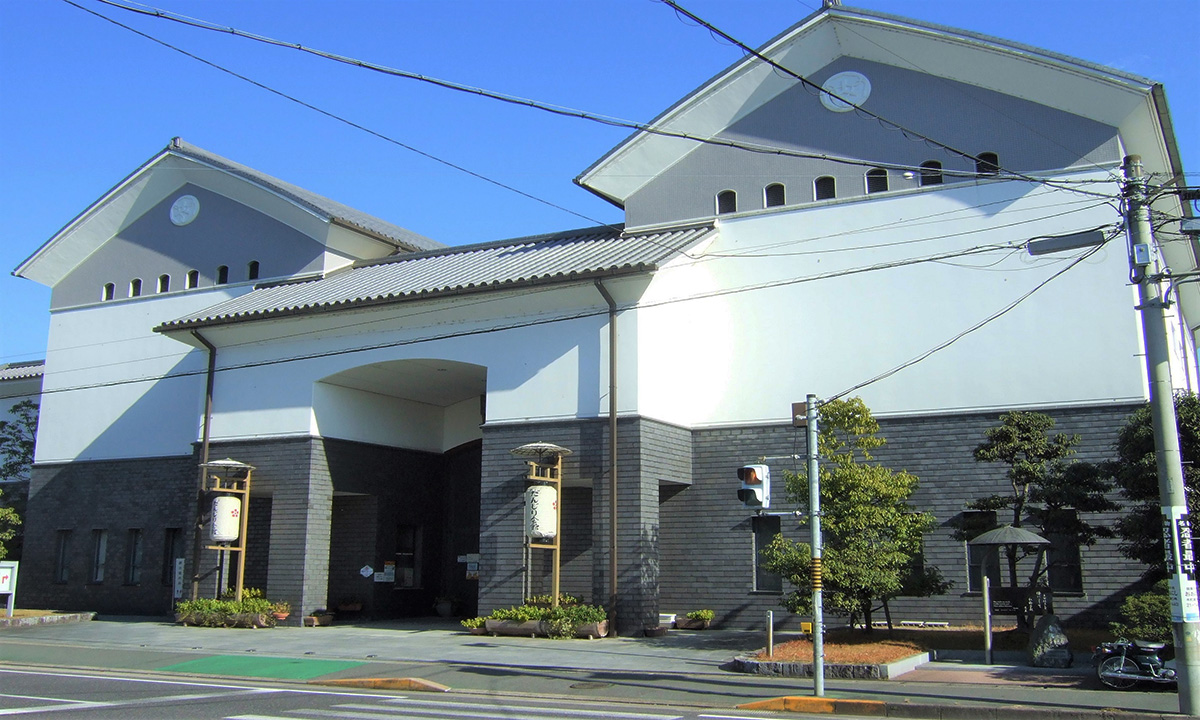 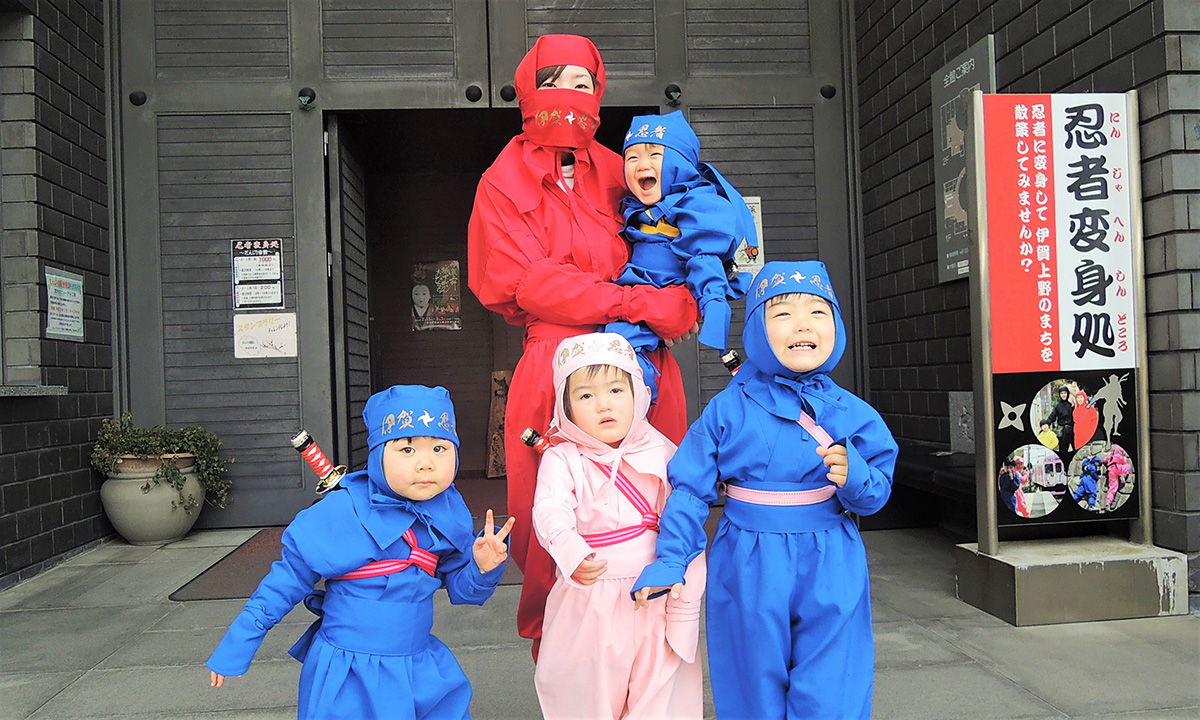 They have around 50 ninja costumes. For covid prevention, the number of people allowed to change is limited to one at a time, and partitions are in place to prevent infection. 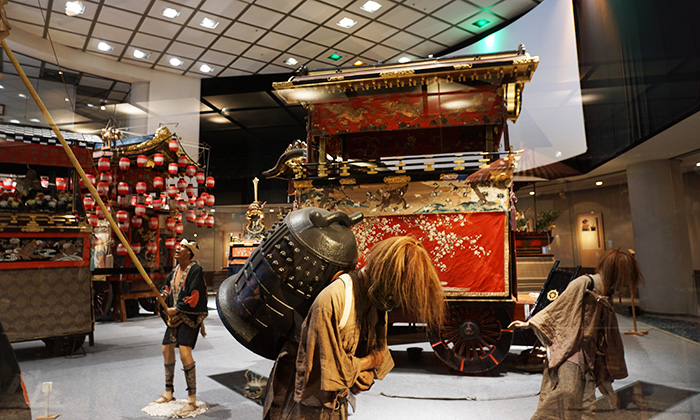 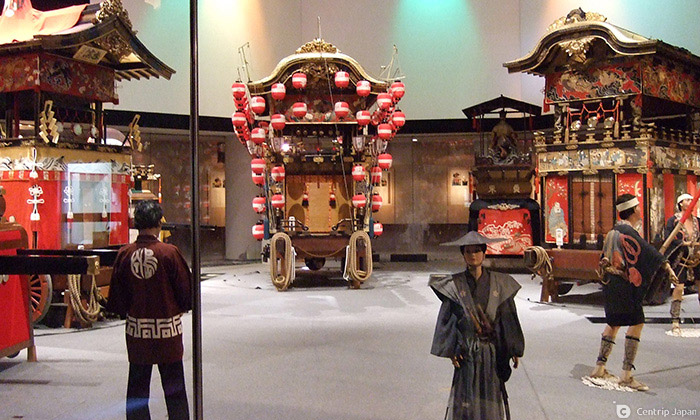 At the Danjiri Museum, the Danjiri used in the Ueno Tenjin Festival held every autumn are on display. You can also see a reproduction of the colorful Oni-gyoretsu (demon procession). The hall has an HD video explaining the demon parade to the accompaniment of Japanese drums and other Japanese musical instruments. 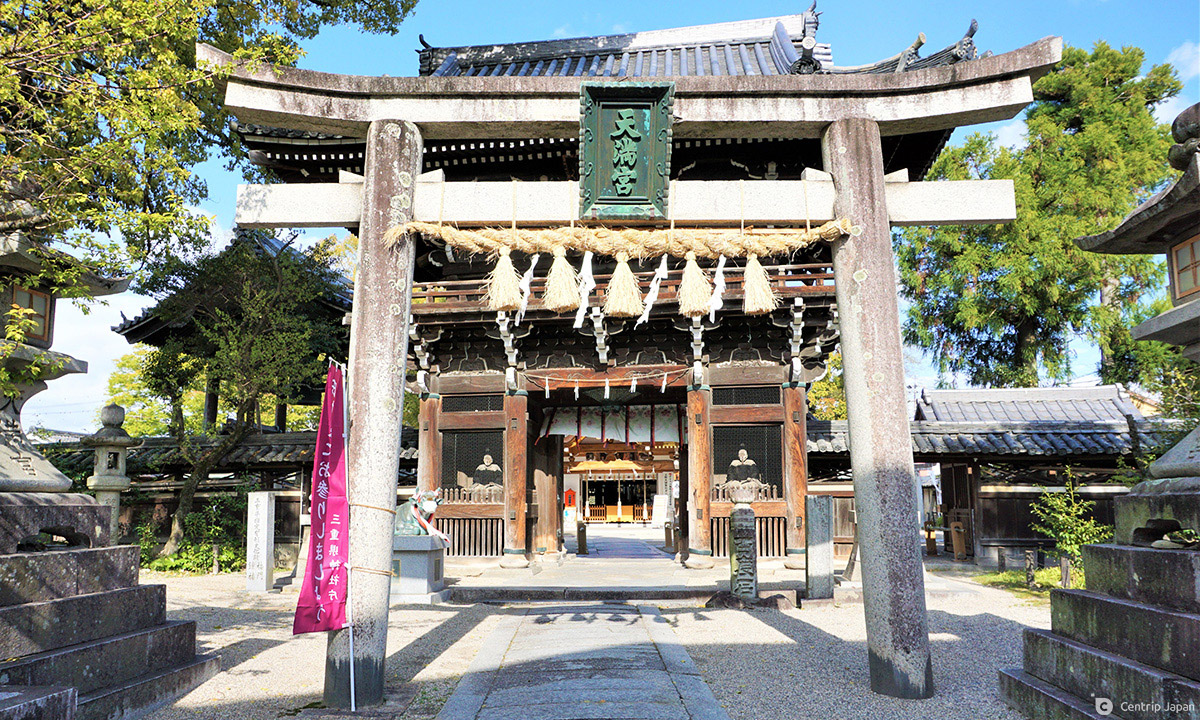 The Ueno Tenjin Festival centers on Ueno Tenjin Shrine. The procession included two portable shrines with demons and danjiri accompanying them through the city center. 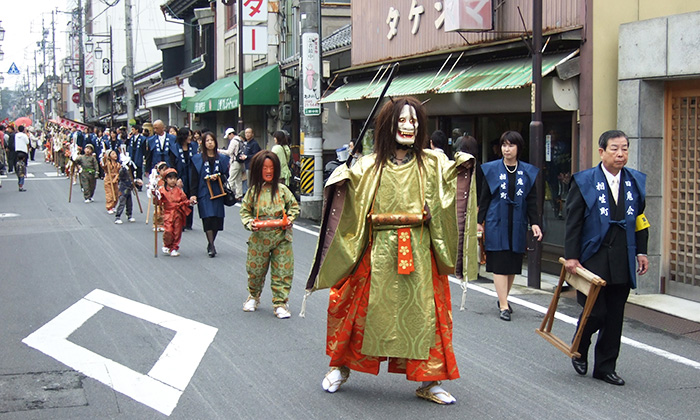 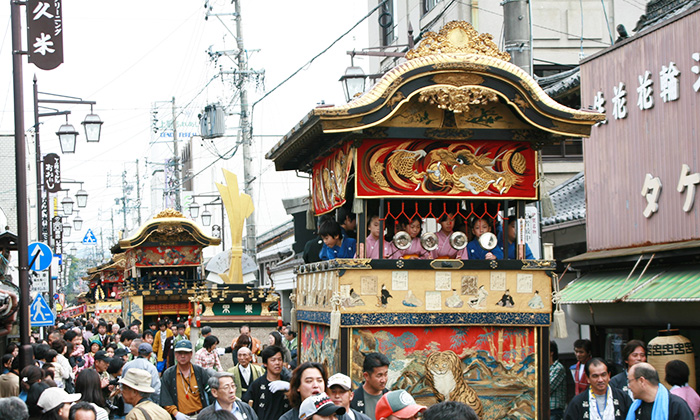 The demon procession began during Todo Takatora's reign over Iga in the late 17th century. As he grew old, Takatora contracted an eye disease. He went to a temple to pray for his eyes to get better, and at the temple, he received a mask. Later, masks were handed out to the townspeople, who admired and respected Takatora, began to reenact the procession of Takatora going to the temple to pray for good eyesight with the masks. The tradition later became a part of the Ueno Tenjin Festival, was passed down to the present day. This unique festival, which has lasted for more than 350 years, was designated an Important Intangible Folk Cultural Property of Japan in 2002 and registered as a UNESCO Intangible Cultural Heritage in 2016.
Read more about the Ueno Tenjin Festival here. Ueno Tenjin Festival

In the ninja hometown of Iga, you can learn about the ninja and meet them today. Alongside the culture of a castle built by one of Japan's most famous feudal lords, Todo Takatora, with over 400 years of history. Together these aspects make Iga a unique region in Japan.