People who are coming to Japan in July and August are very fortunate! It is not a secret that Japanese prefer to hold all kinds of matsuri (festivals) in summer. Therefore, there is an endless choice of fun of events in July. The Sea Bream Festival (Tai Matsuri), floating lights(Owari Tsushima Tenno Matsuri), World Cosplay Summit, Firework displays all over the area : all this and more is waiting for you! Let's explore Japan's lively summer! 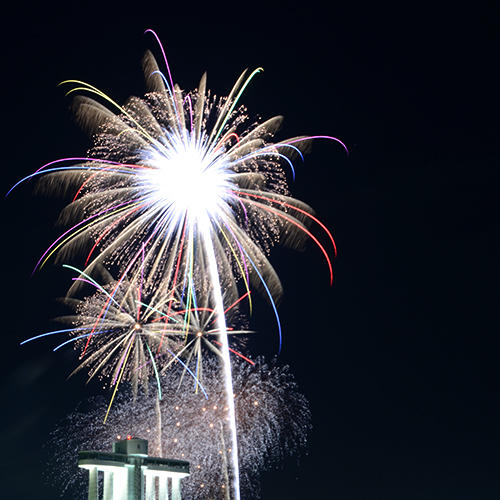 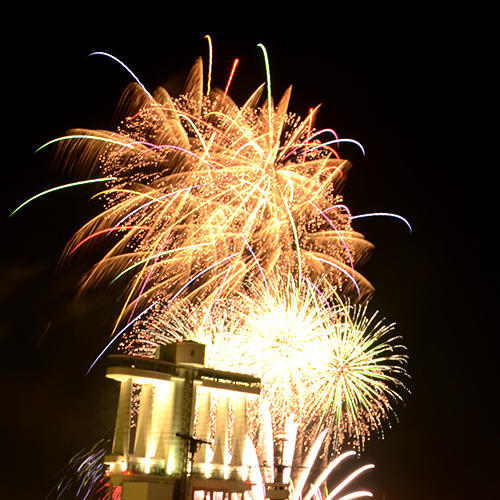 The most famous summer firework festival in Nagoya!
It is Marine Day (Umi-no-Hi) on July 16th. That day, there will be plenty of events, beginning in the morning with "Taiko"(Japanese Drums) performance, the Local Floats Parade, "Odori" dance and more. Each of them can bring you the special atmosphere of a Japanese summer!

At 19:30, it is time for the highlight: the firework display! More than 3000 fireworks launched in sequence and choreographed with lights and sound, reflecting on the sea, make for an audiovisual feast. Enjoy fireworks at sea in Nagoya with about 390,000 other people.

It is convenient to go to this event held in Nagoya Port: 30 minutes by train from Nagoya Station. A good choice for people who do not want to go too far. 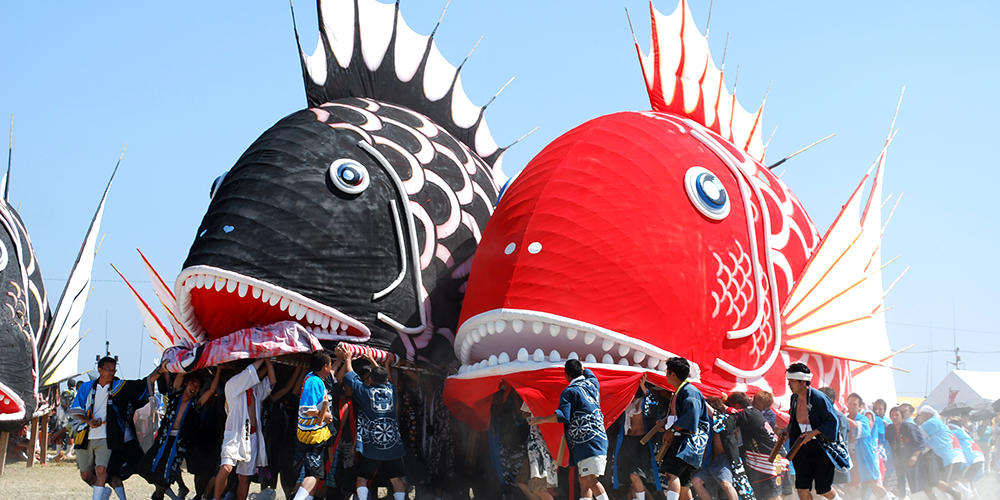 Maybe there has never been so peculiar a festival as this one before!
Toyohama is one of the best commercial fishing ports in Aichi near Chubu centrair international airport. The bizarre annual festival, Tai Matsuri, is based on the tides at Toyohama Beach. It is held in summer to pray for maritime safety and an abundant catch. 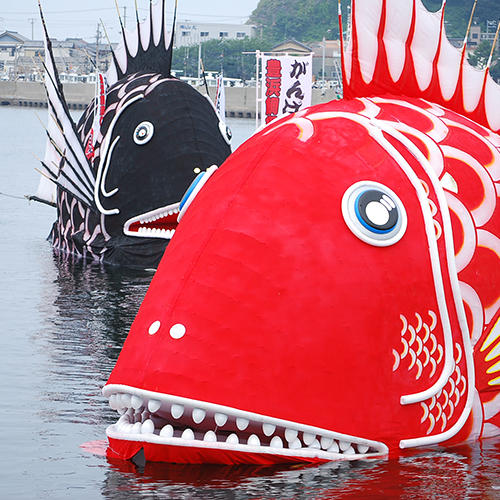 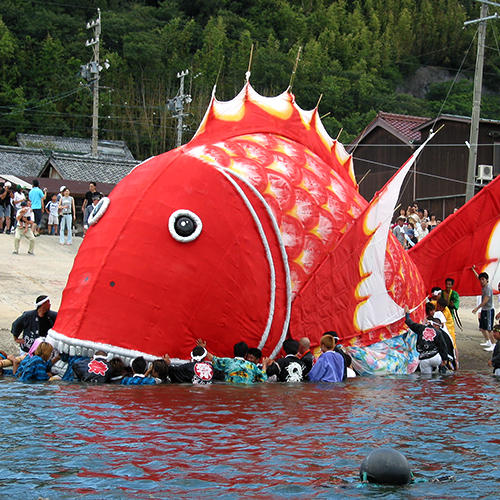 The Matsuri starts with a parade of giant sea breams made of bamboo frames and dyed cotton cloth, carried by a group of young men in traditional clothing. After floating through the town, these breams will be returned into sea to "swim" and then taken to the shrine as a sacrificial offering! The Sea Bream Light-up event is at night.
A Giant sea bream is around 18 meters in length, 6 meters in height and weighs 1 ton. Each one has to be carried by a group of up to 60 men. What a unique festival!

Each giant sea bream is cute and features a different color. Check it out!

Owari Tsushima Tenno Matsuri, one of Japan's three major river festivals, has a history of over 600 years. In 2016, it was designated an Intangible Cultural Heritage for Humanity by UNESCO.
The festival is devided into 2 parts: Asa-Matsuri (Morning Festival) and Yo-sai (Evening Festival). The evening part is the main event: 5 Makiwara Boats, decorated with 12 lanterns at the bow and 365 lanterns arranged in a dome-like shape at the hull, speed toward to the Tenno River to the sounds of festival flutes and drums. Illuminated boats, silent river, a special memory!

Every year there are a lot of visitors to Tsushima-city during the Matsuri. Don’t forget to stake out a good spot in advance! 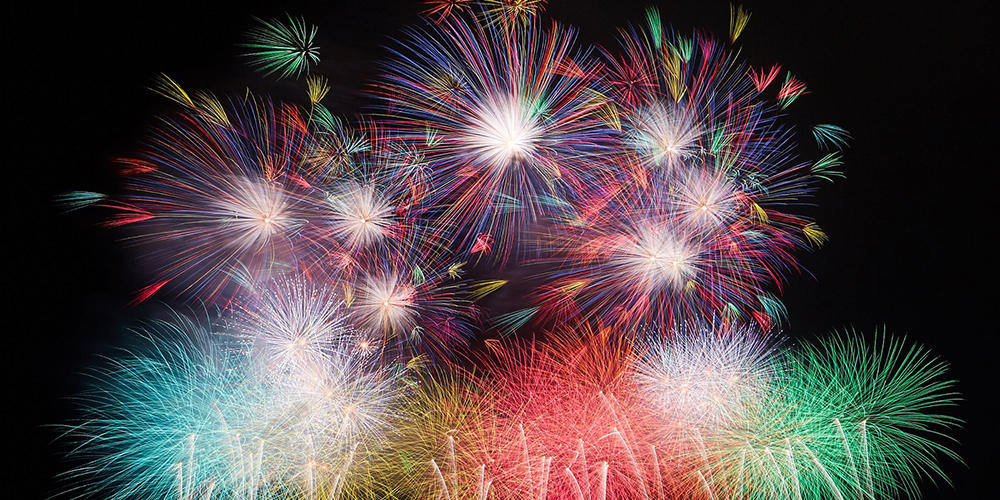 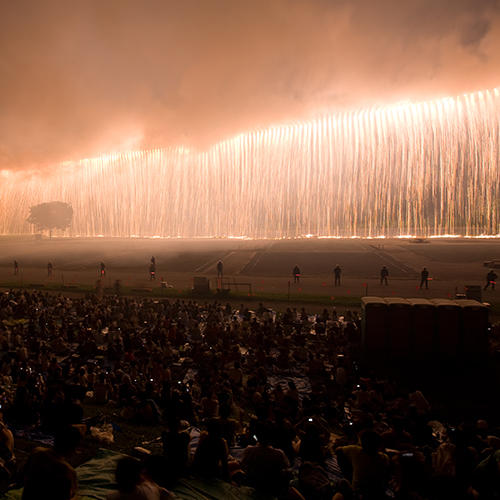 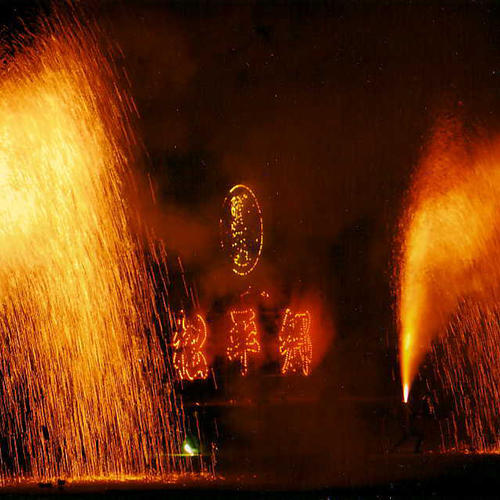 Come to Toyota for the largest fireworks show in Central Japan!(Toyota,the location of Toyota Motor Corporation's head office )
The fireworks used in the Toyota Fireworks Show are designed by famous firework makers, having been named "Best 10 Fireworks show for Firework Makers" multiple times! As well as various original fireworks, traditional hand-held cannon tezutsu fireworks and a colossal "Niagara Falls" curtain of fireworks over 500 meters wide are also worth a look! 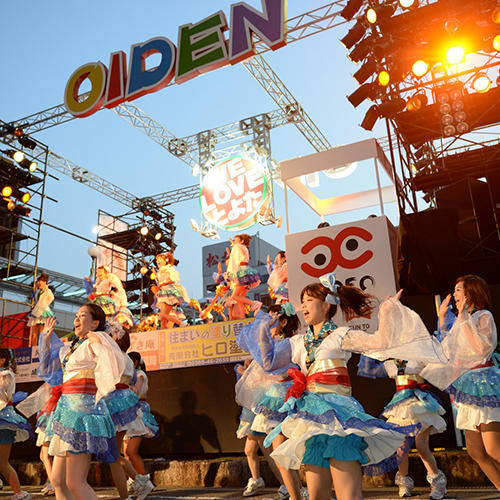 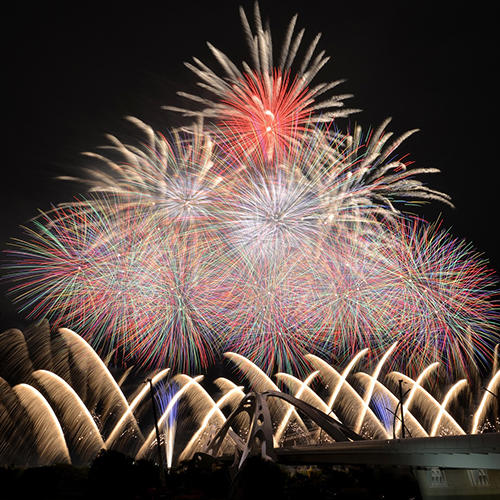 Before the fireworks show, there will be a grand dancing parade on 7/28! 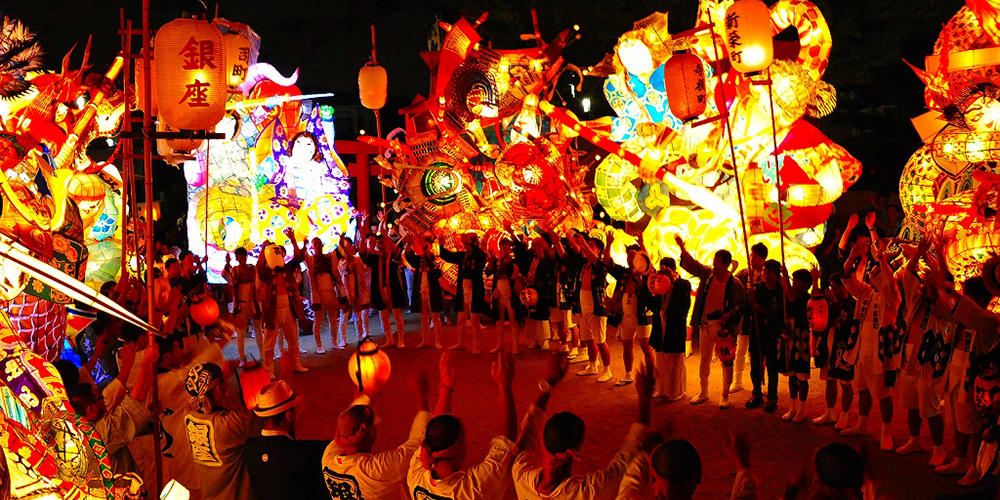 The Kariya Mando Festival, a matsuri of Akiba Shrine which boasts more than 230 years of history, is held to pray for the town's safety and protection from fire. It is designated as an Important Intangible Folk Cultural Asset of Aichi. During the festival, young men dance to music played on flutes and drums while each carries on his shoulders a papier-mâché Samurai doll called a "mando".
It is quite spectacular to see various colorful Samurai Mando lit up at the same time. 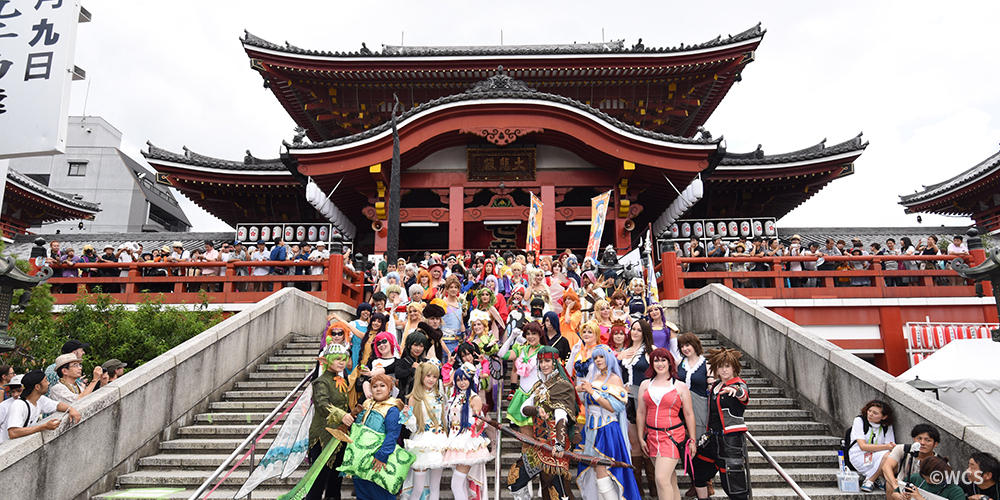 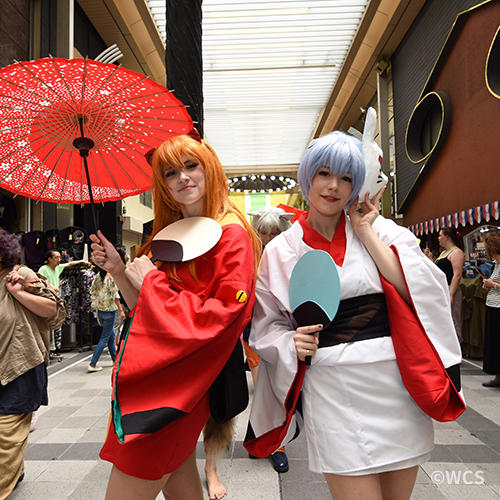 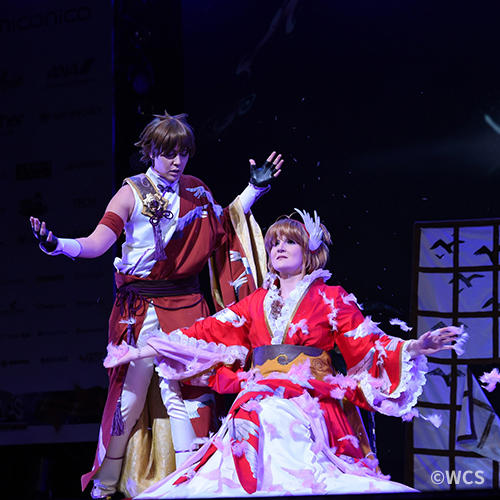 Are you an ACG (animation, comic, game) fan? If the answer is yes, then do not miss the largest cosplay event in the world!
The World Cosplay Summit(WCS) from 2003, an annual event held in Nagoya, attracts numerous cosplayers from over 30 countries. Every year, top cosplayers from each country will come to Nagoya competing for the title of No.1 Cosplayer in the world. 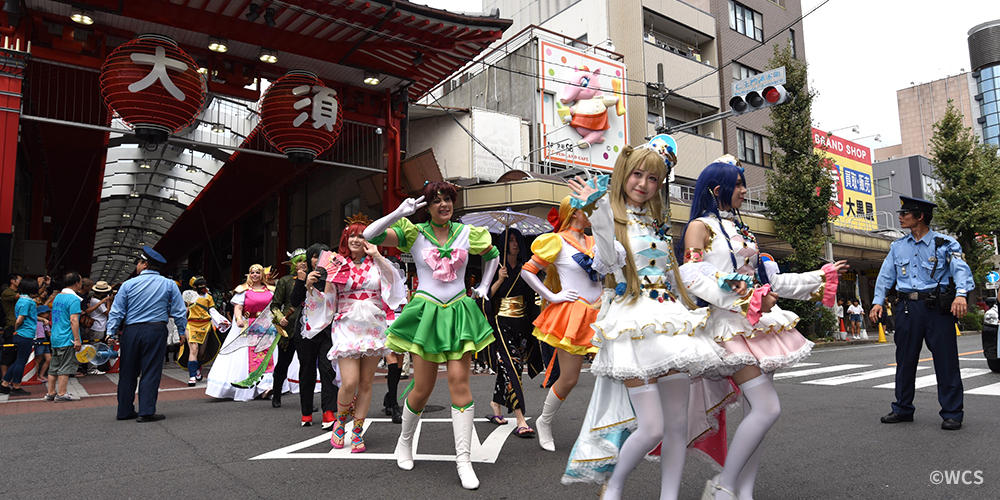 During the event, there will be the cosplay championship itself, a cosplay parade, animation music performances and so on. Even if you're just taking photos, you will have an unique memory. And maybe you can meet your favorite animation characters! 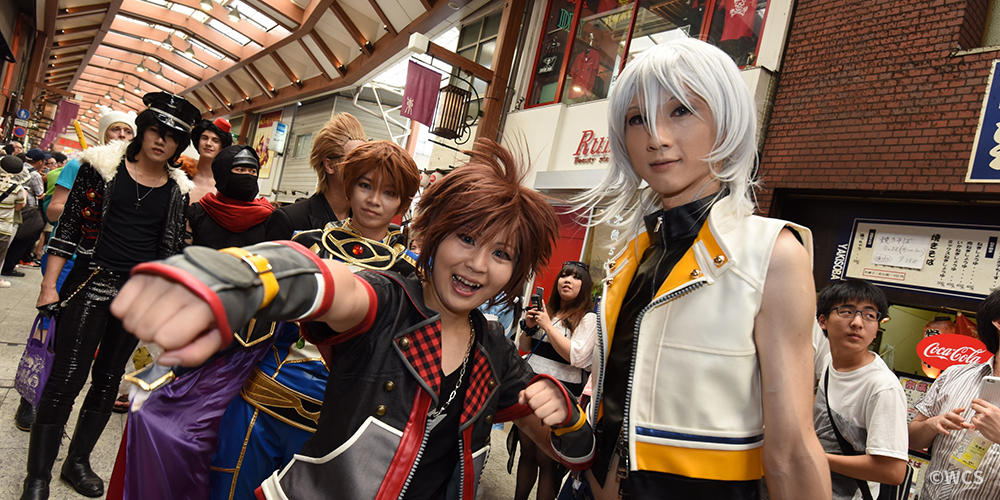 These events in July mentioned here are the best of the best, and every one is worth a look!
The only problem is that most of them will be held on the last weekend of July - it's difficult to choose!!
Have you decided which summer event you want to go now? Let's start to plan our schedule now!