Shintoism is known for its many Kami or Gods, in Japanese. Kami exist in everything from the tallest mountain, a quickly flowing river, towering trees, and the smallest blade of grass. Some of them can even inhabit the most unexpected objects. Buddhism also has its share of Bodhisattva. Join Centrip as we introduce you to some of Japan's strangest shrines and temples! 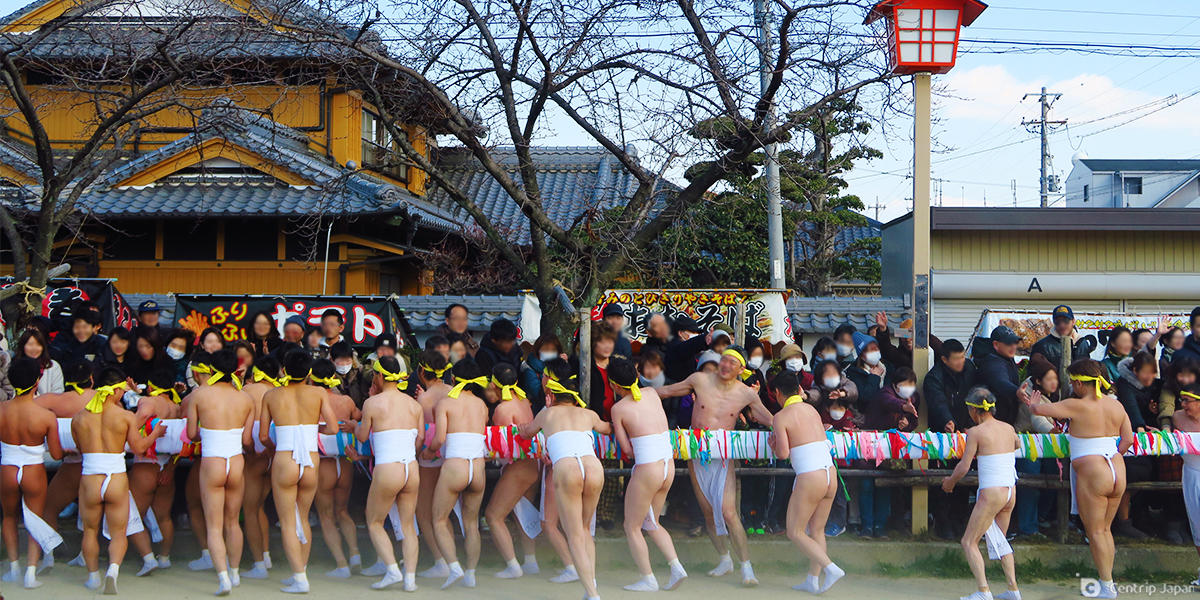 The Naked Festival (Hadaka Matsuri in Japanese) is a festival for Japanese men. In the cold winter months, when you shiver regardless of what you wear, young men are willing to strip off their clothes and head out to the festival. This is the Naked Festival at Konomiya Shrine in Aichi, Japan. Formally, it is known as Naoi Shinji and originated more than 1250 years ago. It begins every year on the 13th day of the lunar calendar, and its original purpose was to drive out the plague, but now it is a Shinto ritual for the coming of Spring. 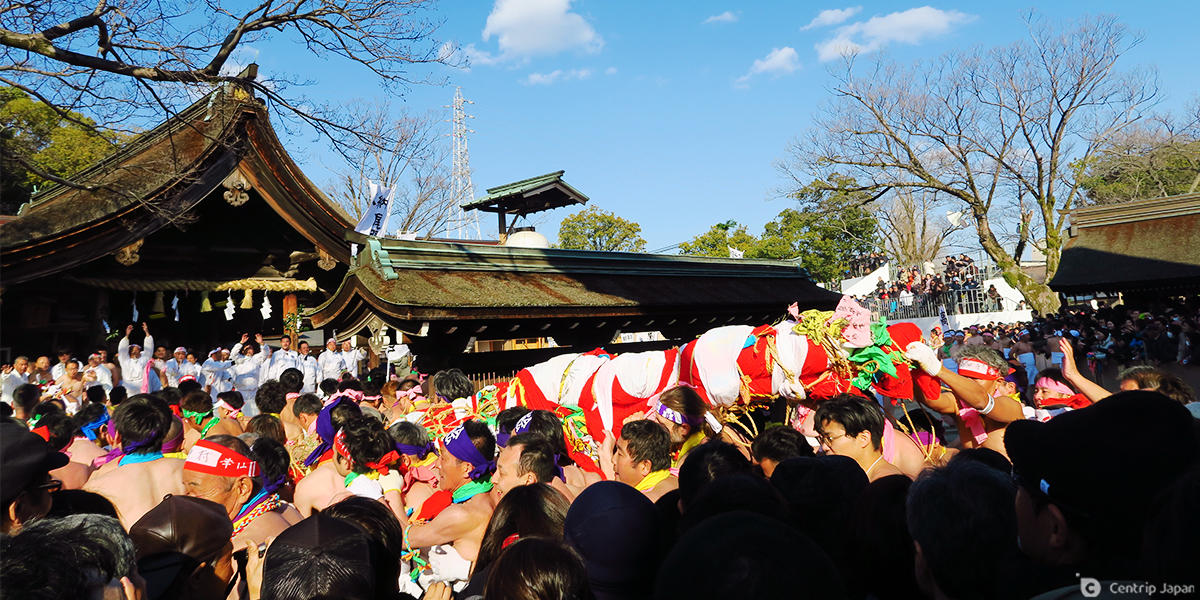 At the entrance of Konomiya shrine, a group of people await the naked men and douse them in water. Although the water is cold, it quickly becomes steam and evaporates into the sky, from their passion. A Shin-Otoko is selected by lottery before the festival and must wash his body for three days at the shrine grounds. On the day of the event, the participating men reach out to pass their sins on to the Shin-Otoko by touch.

If you come in February you should definitely check out this unique festival. 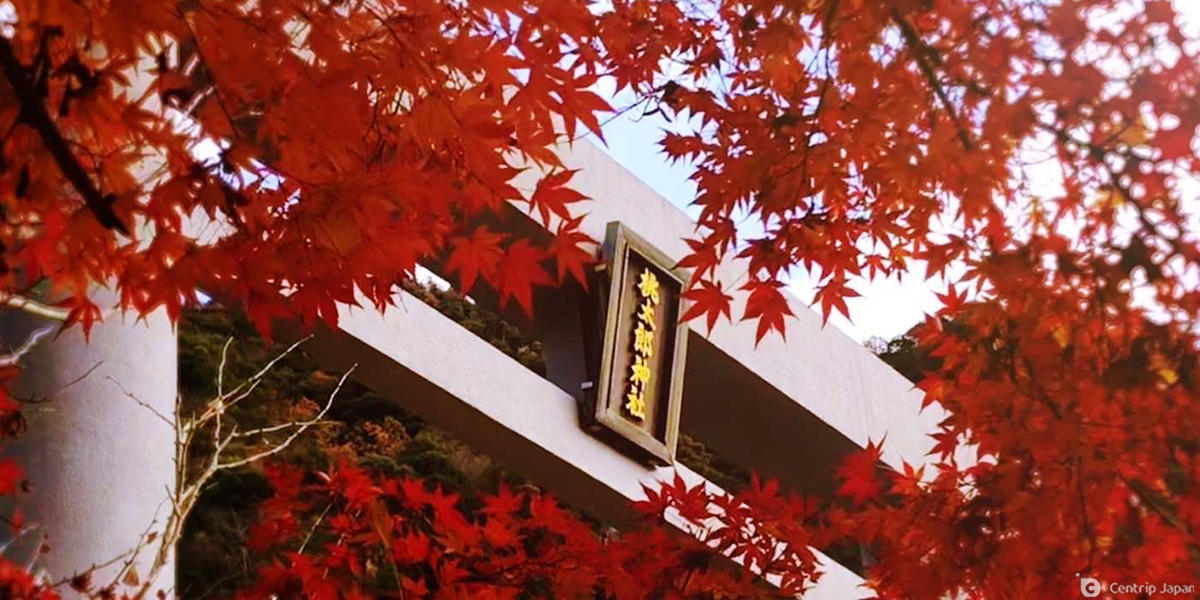 Momotaro is a Japanese fable. Momotaro left on a quest to slay evil ogres after his village was attacked. On his way, he befriended a dog, monkey, and bird, and together they defeated the ogres. At the end of the fable, Momotaro transforms into Mt. Momoyama, and this shrine is dedicated to the mountain. 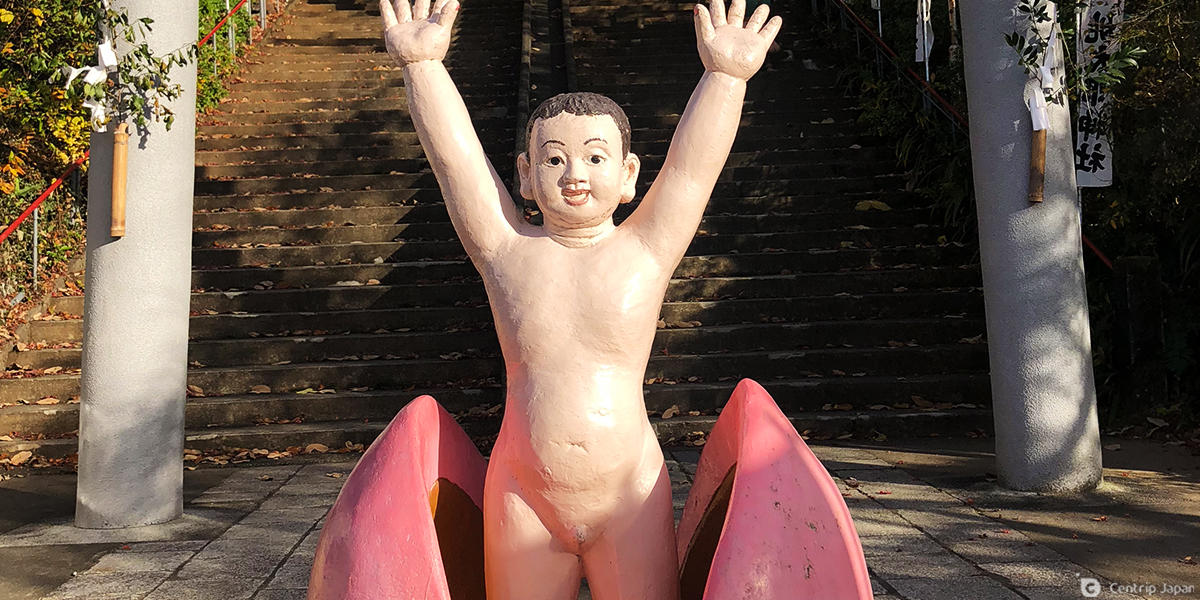 The Kami of Momotaro Shrine are said to ensure safe deliveries of babies and health for children. The characters from the fable can be found all over the shrine grounds, giving a different feel to the usual solemnity of Japanese shrines. 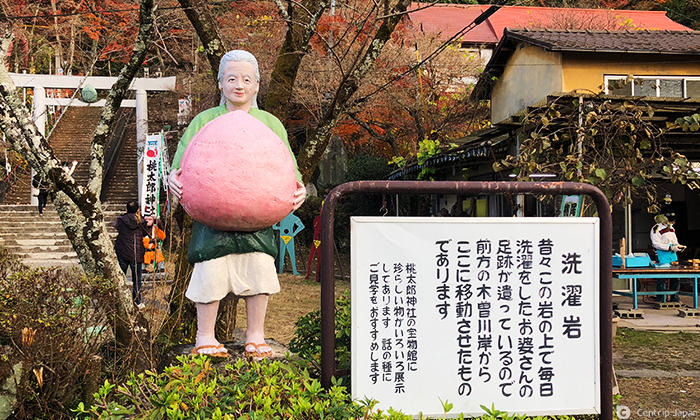 This statue shows the scene when the grandmother found the big peach while she was doing her washing. Only to discover later that Momotaro was inside! 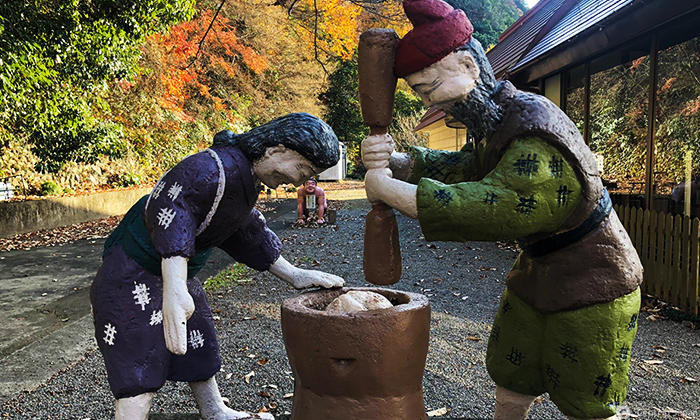 The grandmother and grandfather who raised Momotaro. 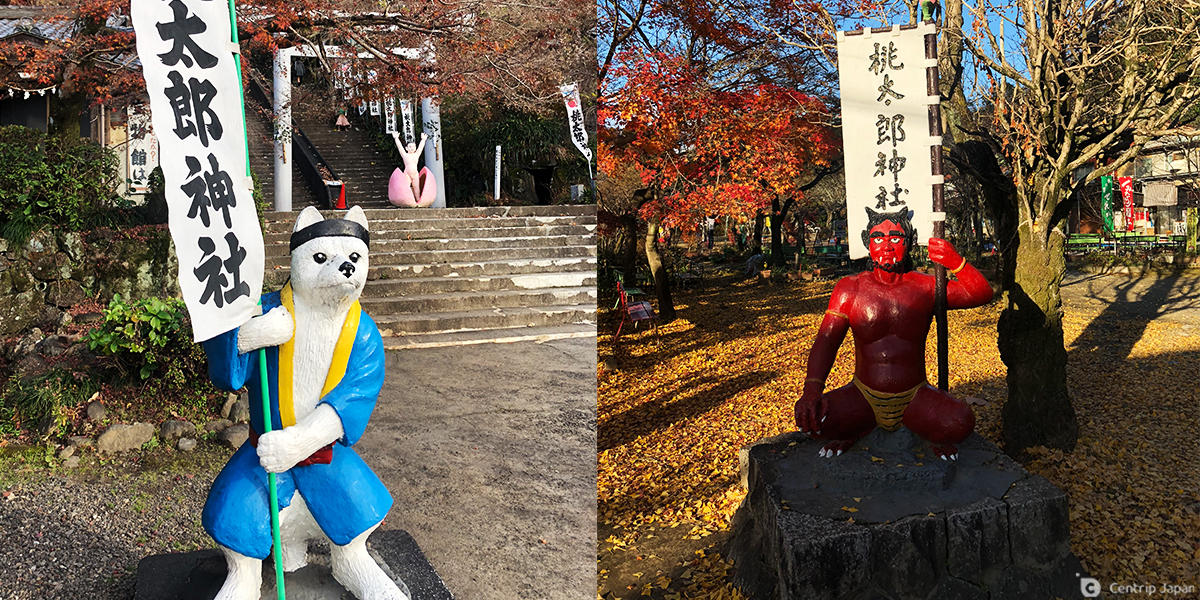 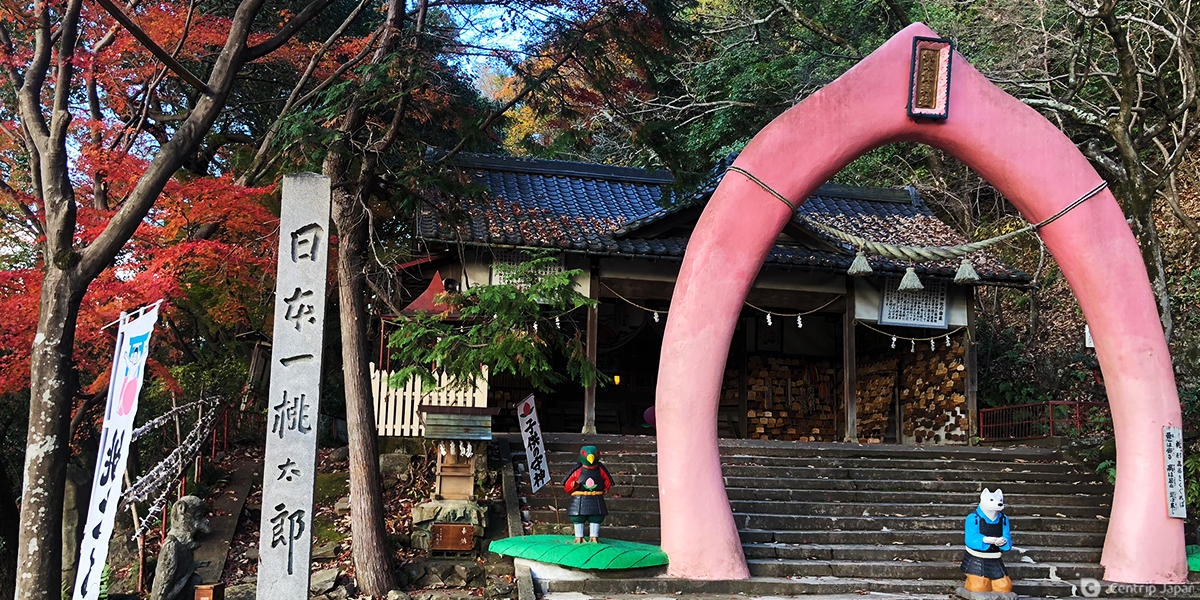 Even the gate is made in the image of a pear.If you are a fan of the story, try looking around to find your favorite character. 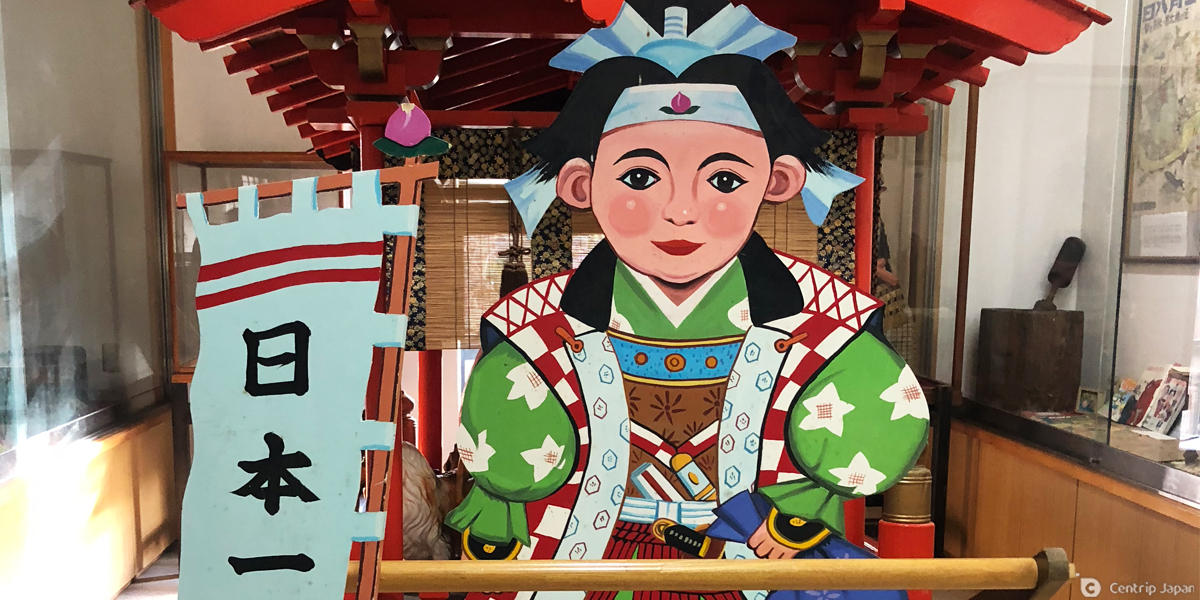 There is a small museum on the grounds with rare items on exhibit. 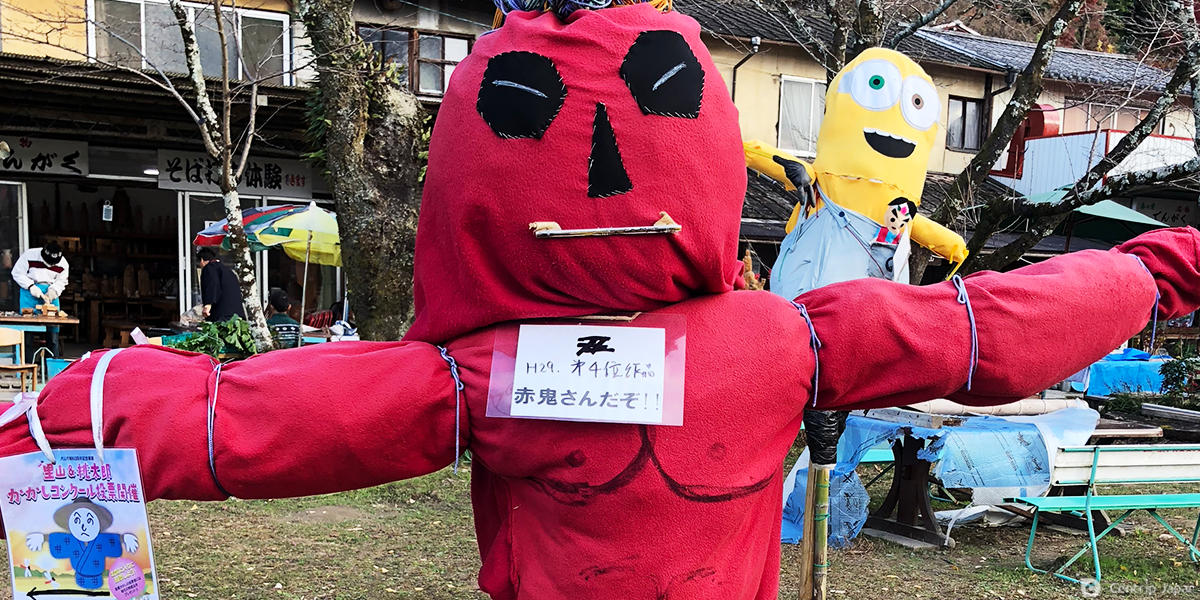 Around the shrine, there are various ogres on display. 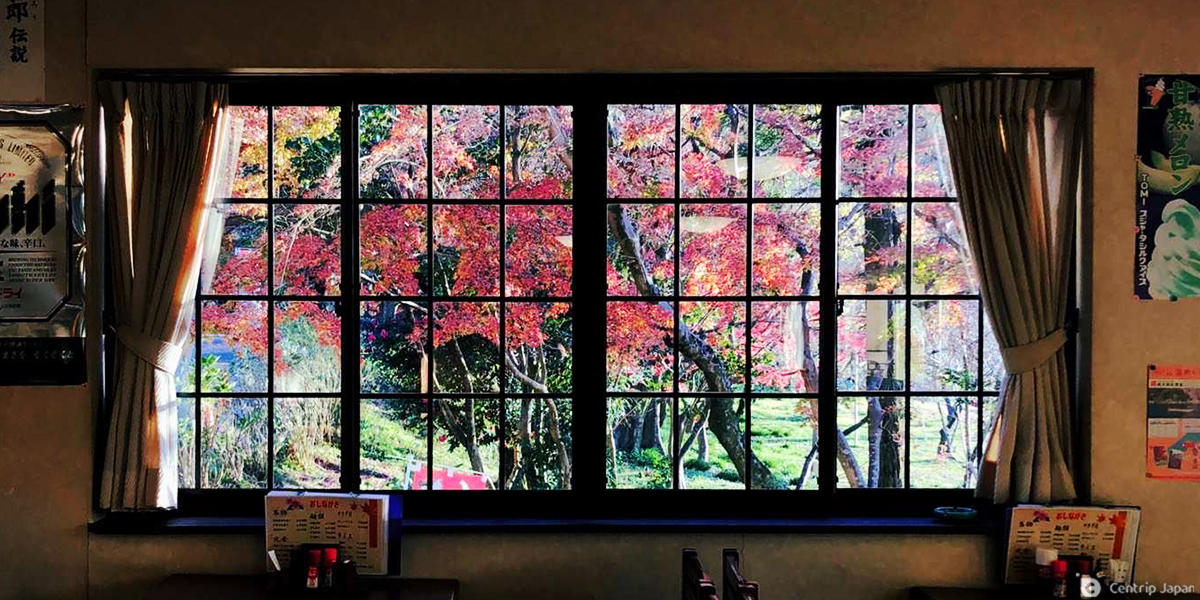 The restaurants near the shrine are delicious and reasonable. If you push on a little further you will find Jakkoin, a temple famous for its autumn leaves in Gifu. Be sure to stop by if you visit in the fall. 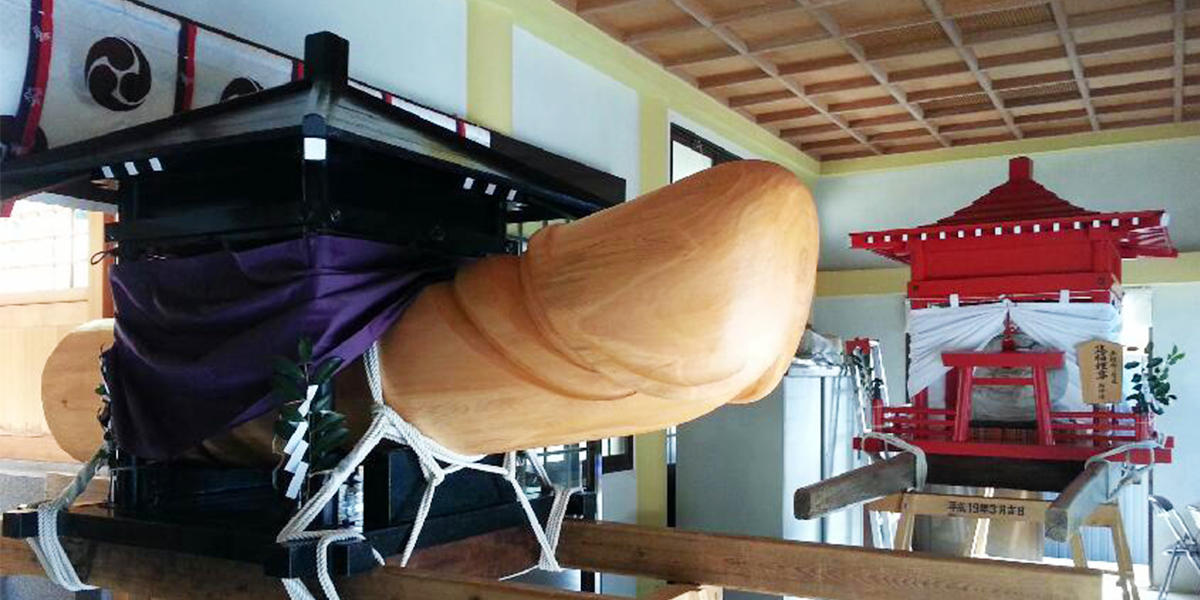 The original year of construction is unknown, but the oldest records suggest 927 CE. Long ago, the landowners shared beef with the local people before farming, but eating meat was prohibited. The Kami got angry when heard of it and brought a plague of locusts on the crops as punishment. To calm the wrath of the Kami, the peasants made offerings of white pigs, chickens, and white horses. In return, the Kami taught the people how to remove the locusts using hemp leaves, fans, and phalluses. 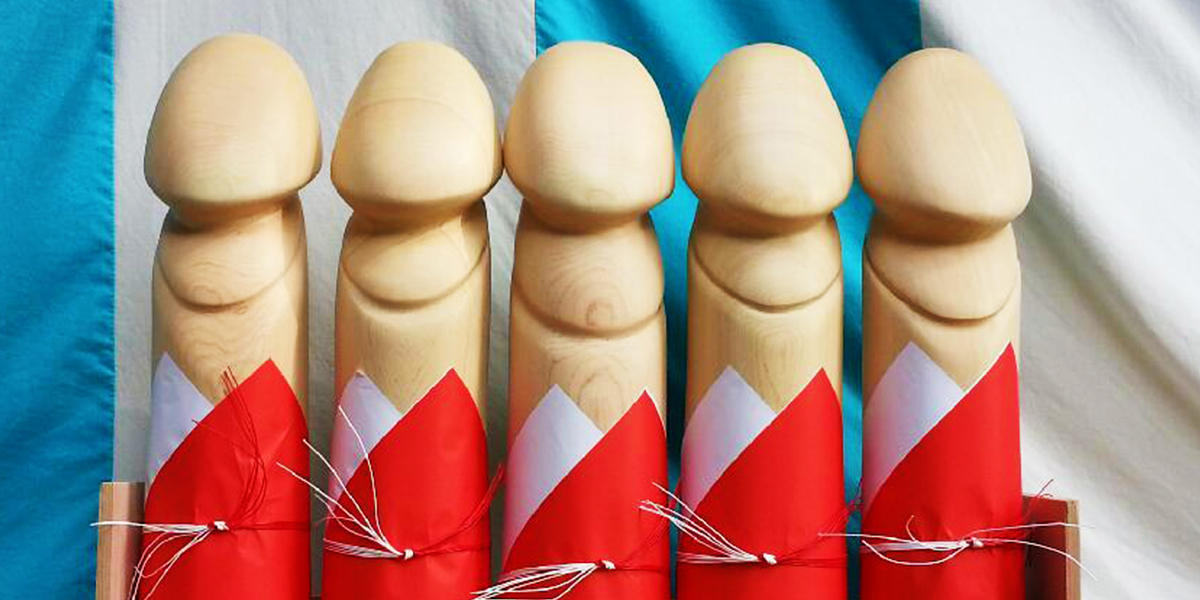 Many prayers for childbirth are made here. The Kami also protects the prosperity of businesses and ensures abundant harvests. Phallus decorations are visible everywhere in the shrine, which has earned it the nickname, Penis Shrine. 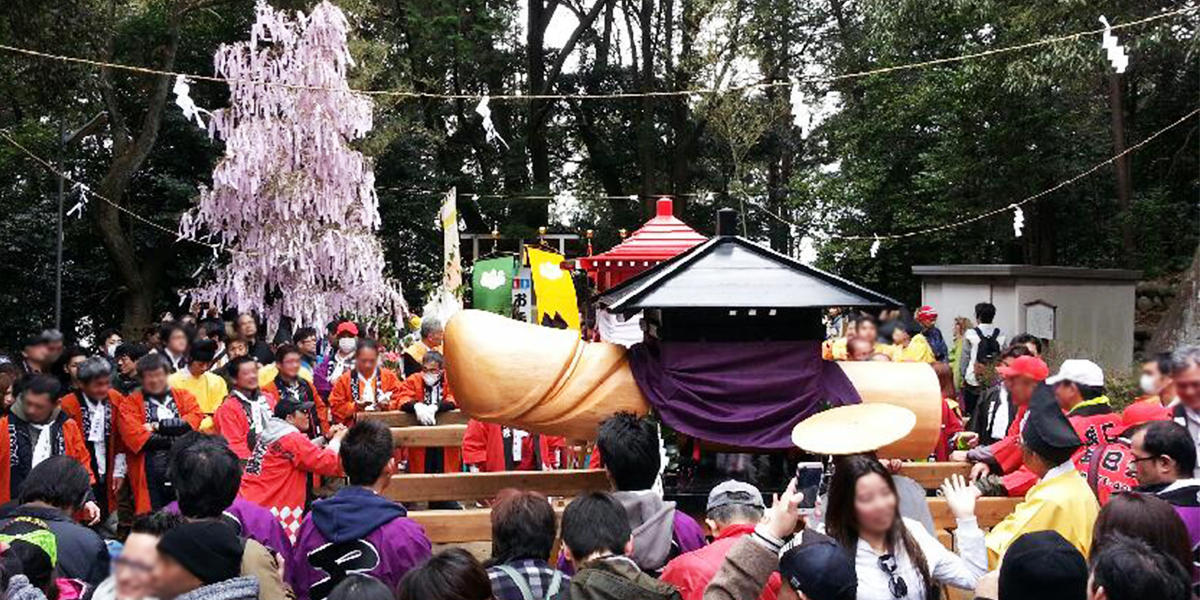 The most famous event at the shrine is the Honen Matsuri. The festival is held to ensure a good year of harvest and prosperity for your descendants. Each year a new phallus, more than 60 cm in diameter and 2 m long, is carved from Japanese cedar. 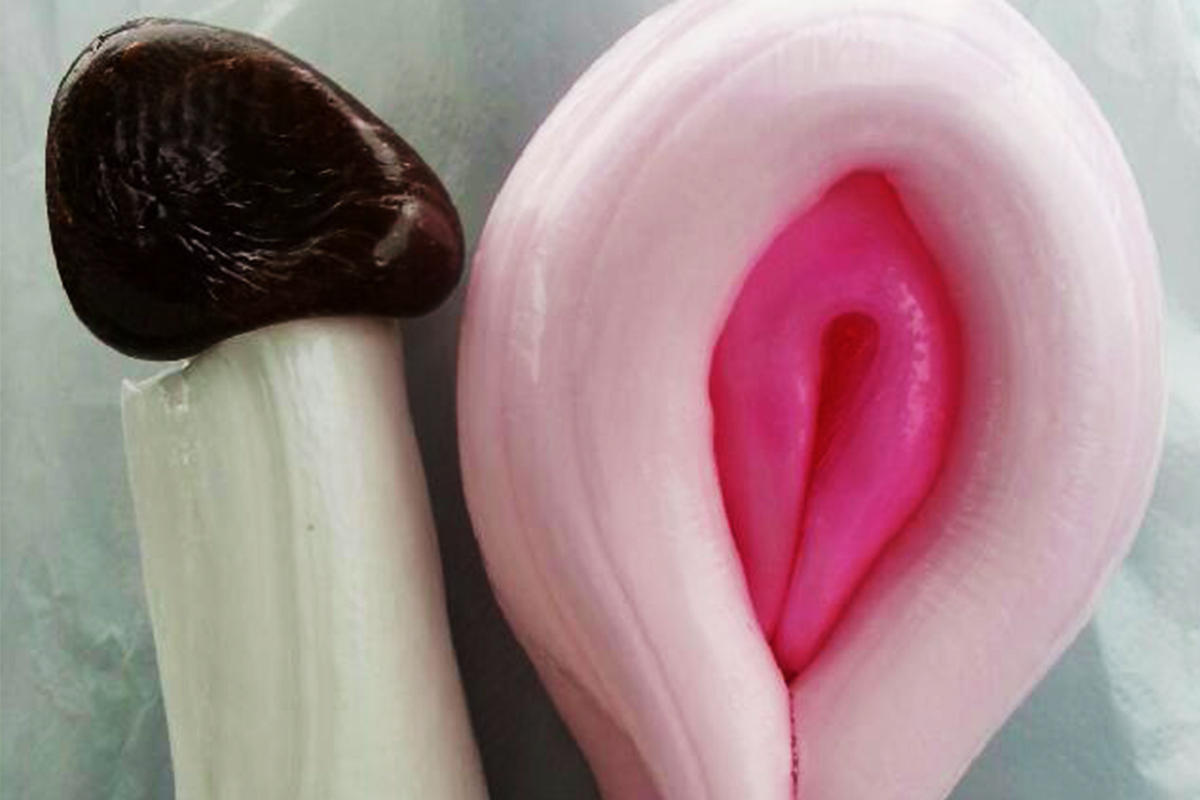 Many phallic-shaped snacks are also on sale! Be sure to have a taste. 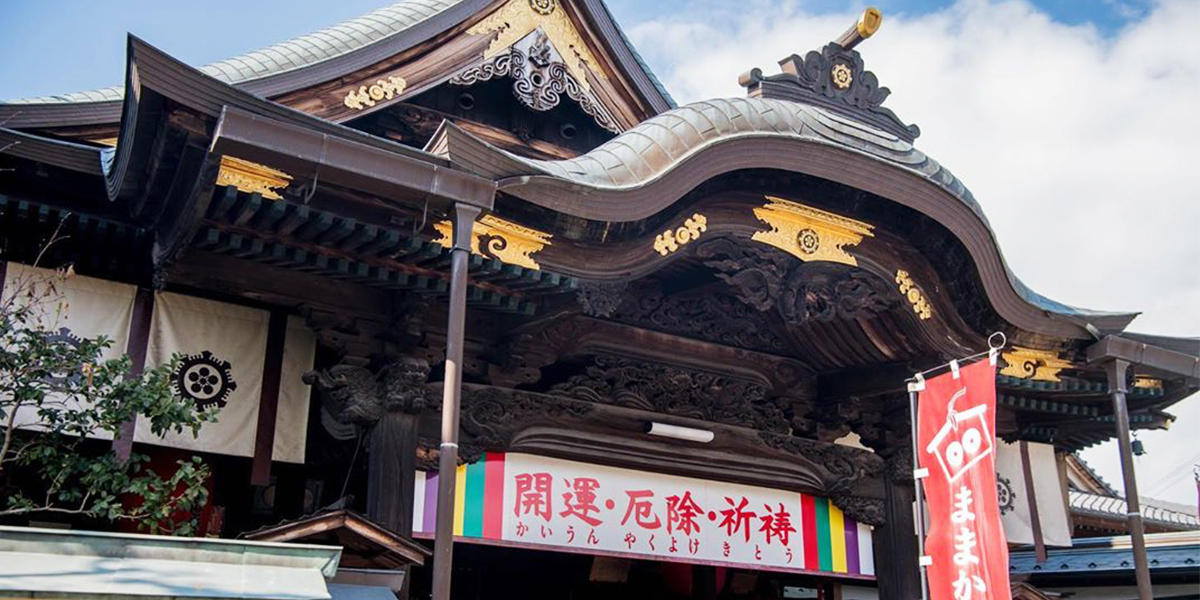 Not only does Japan have shrines dedicated to manhood, but it also has one for womanhood. Mama Kannon is the only shrine in Japan dedicated to the female breast. Officially it is called Ryuonji and dedicated to the deity Senju Kannon. This Kannon vowed to work unceasingly until all sentient beings could be free of the cycle of suffering, and split its body into 1000 heads to witness suffering, and 1000 arms to alleviate it. 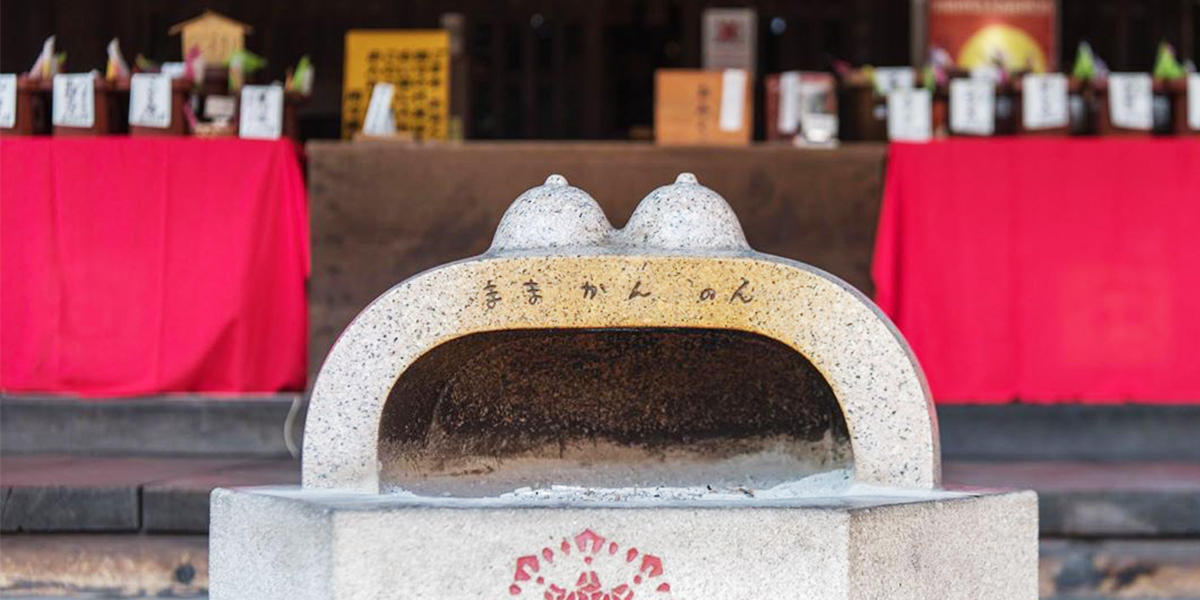 People pray at the shrine for safe delivery of babies and healthy breastmilk production. So you'll find many breast-shaped items around the temple. 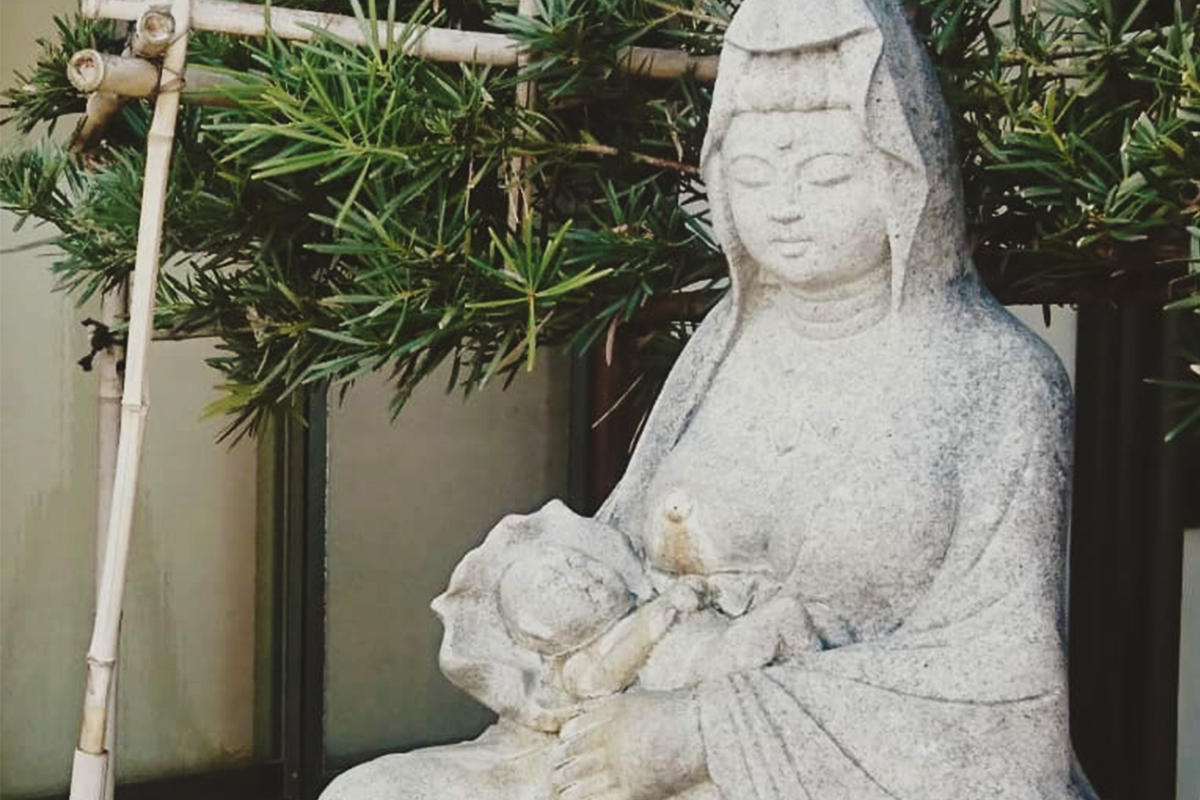 Legend says there was a woman who could not feed her young baby. She was poor and malnourished. The people in the village took pity on her and gave her food, but the woman was very devout. Instead of eating the food, the woman offered it to the Kannon at the temple. When she returned home she was surprised to find that she was lactating and was able to feed her child. This story attracts many expecting mothers to come and visited the shrine to pray for the same blessings. 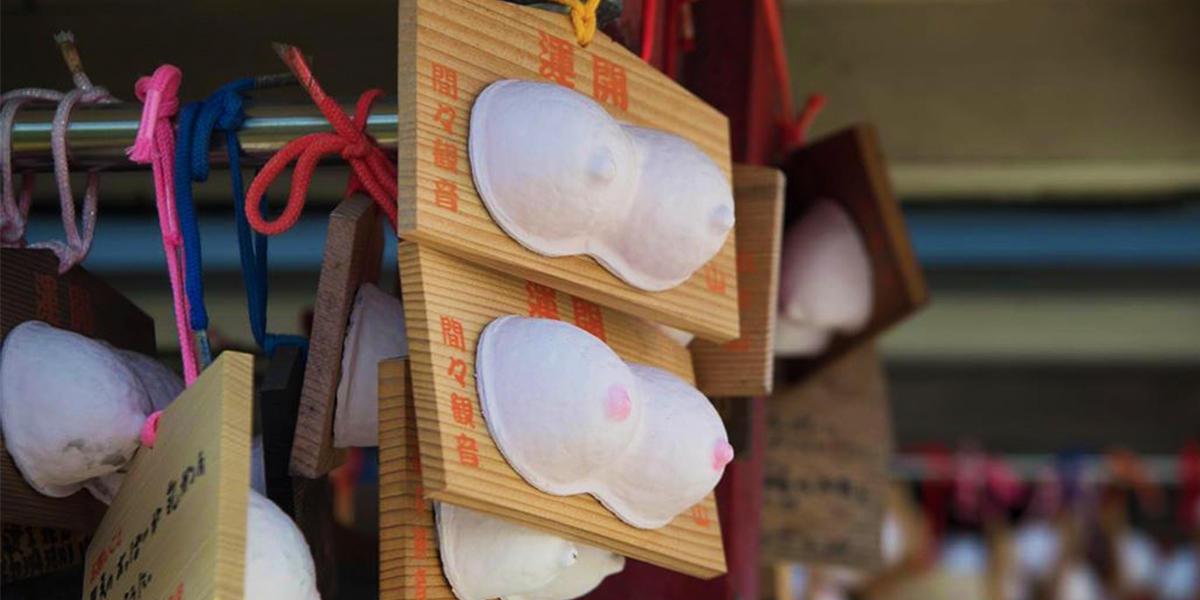 Even the shrine prayer placards are shaped like breasts. 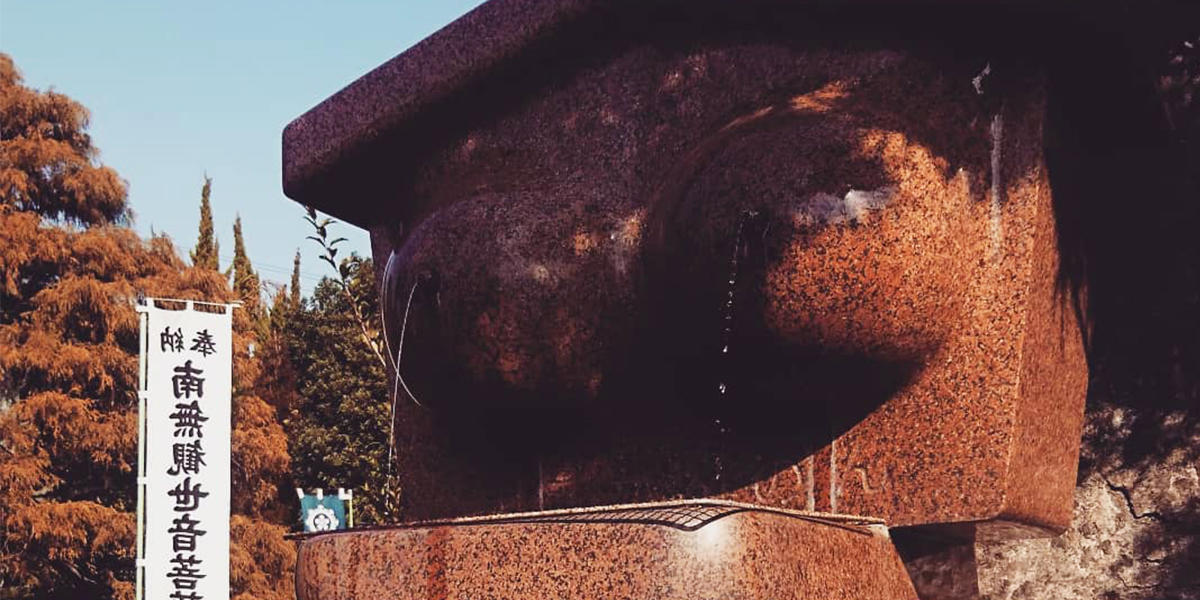 The pond is also shaped to look like breasts. Many tourists have said it is the most embarrassing shrine they've visited. It's definitely comparable to Tagata Shrine, that's for sure.

These places are a little strange don't you think? Japanese culture tends to be unassuming, but sometimes it can hide some in-your-face surprises. If you have the chance, you had better go and see this hidden side of Japan.