Ontake Kodo: A walk through the nature of Kiso

The Japanese and Ontake beliefs

As 75% of Japan is mountainous, mountains have always been a part of Japanese life. As such, Japanese people have always had a sense of empathy and reverence for the mountains. Over time, these feelings took the form of mountain faiths, which developed in tandem with Shinto, Buddhism, and other beliefs.

Among the many mountains, some of them have been thought to have particularly strong spiritual powers. Mount Fuji, Hakusan, Tateyama, and Ontake are the representative sacred mountains.

It was in the 9th century that people began to enter Mount Ontake. It was originally a special place that allowed entry to a limited number of people, such as those who had undergone rigorous training. However, in the late 18th century, two ascetics by the names of Kakumei and Fukan, opened the trail to the general public and the Ontake religion spread throughout Japan.

Ontake beliefs and the Ontake Kodo

The base of the Ontake faith is Fukushima-juku, one of the post towns on the Nakasendo Road.
Fukushima-juku is located near Magome-juku and Tsumago-juku, both of which are known as popular tourist destinations, and close to Kiso-Fukushima Station. It takes less than an hour and a half to get to Kiso Fukushima Station from Nagoya Station on the limited express Wide View Shinano.

The Ontake Kodo starts at Fukushima Station and leads to Mount Ontake. Even today, Ontake practitioners still walk the Ontake Kodo to purify themselves at the waterfall and visit the sacred sites to reach the top of the mountain. There are more than 20,000 monuments called Reijinhi, on the route.

Since Mt. Ontake's eruption in September 2014, this spiritual trail has been closed to visitors wanting to hike near the top of the mountain, but the rest of the trail is open to the public. If you want to immerse yourself in old Japanese beliefs and spirituality, it is worth a visit. Above all, surrounding yourself in the beautiful nature of the Kiso region makes for a very pleasant stroll. 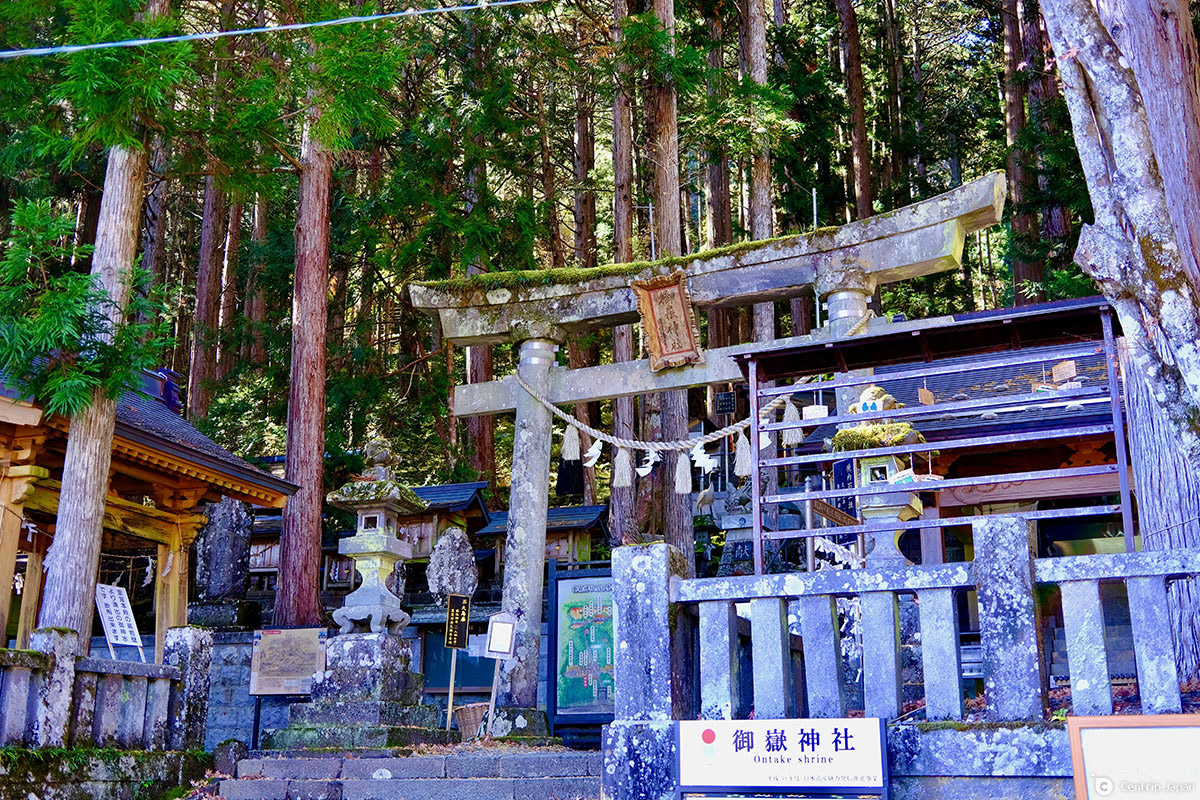 The torii gate is flanked by hundreds of stone steps, and both sides are covered with huge cypress and Spanish oak trees. The steepness of the path is a bit daunting, but the sunlight shining through the trees is pleasant, and the beauty of the green moss growing on the stone steps and lanterns is breathtaking. 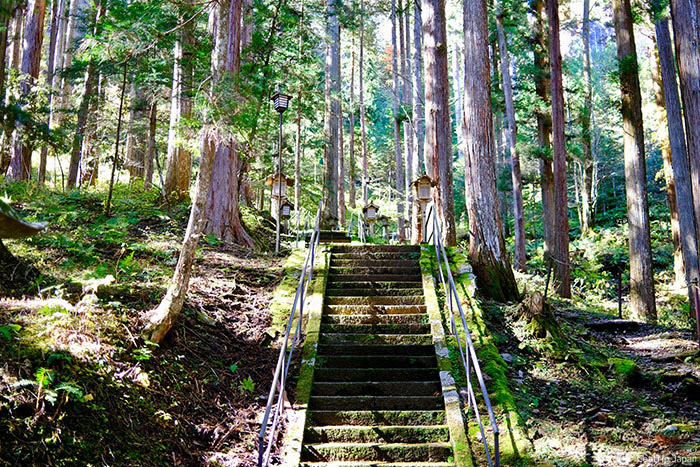 The 371 stone steps leading from the torii gate 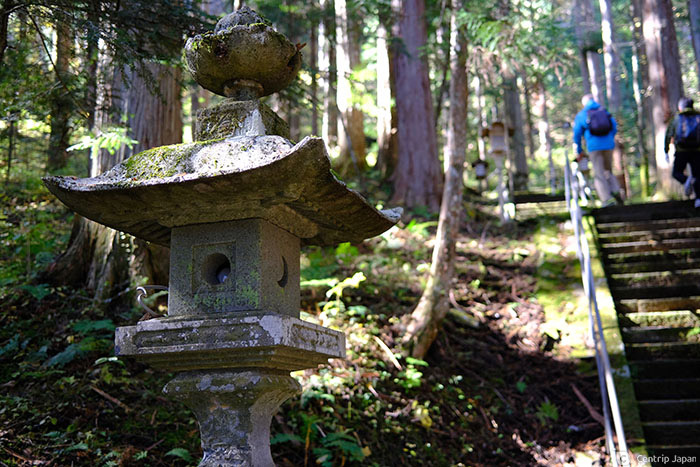 Lanterns to illuminate the stone steps

After climbing a long flight of stairs, you come upon a small shrine that stands against a rock wall. Beside it, water seeps out of the rock wall and forms a single, narrow waterfall. Around the shrine, there are many monuments to the spirit gods, which are a part of this spiritual landscape. These monuments were created by the followers of the Ontake faith who believed that their souls will return to the mountain to serve the gods forever after death. 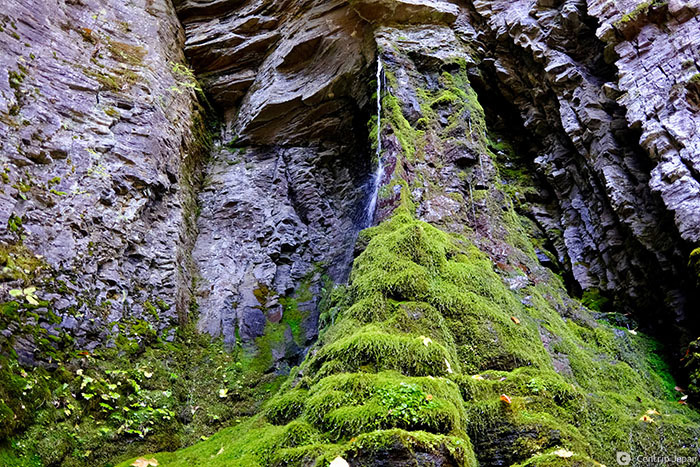 Water seeping from the rocks by the shrine building 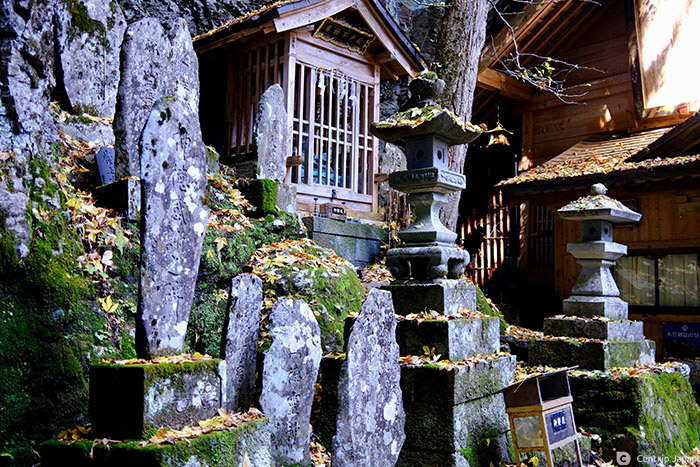 The monument to the spirit gods around the shrine building

Omata Sansha and the three great gods of Ontake 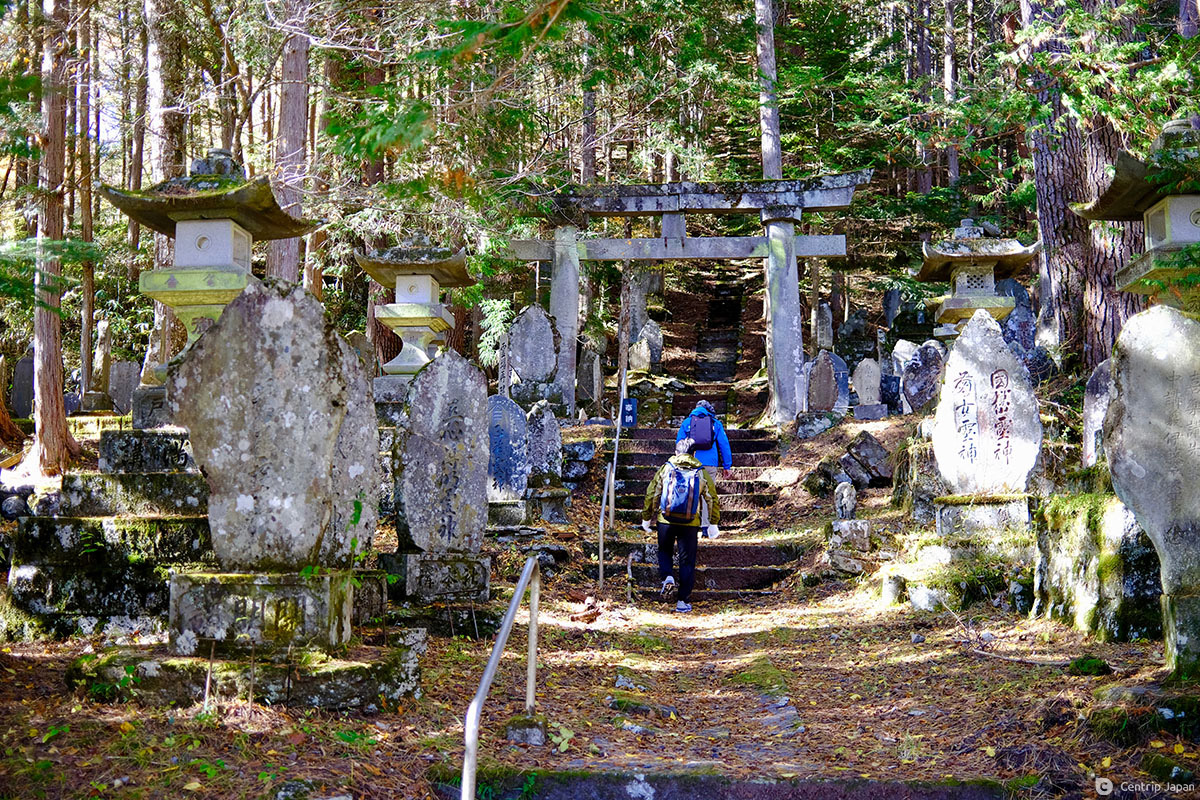 At the starting point of the hike is the Omata Sansha Shrine. Omata Sansha is said to be for people who are incapable of the climb up to the top of the mountain, and a visit here is the same as visiting the top of the mountain. Nevertheless, these stone steps are tough to climb. They are even longer and steeper than the steps of the Satomiya, which I visited earlier.

Three statues of the three gods line the top of the stairs and are even more divine than the ones on the other side of the stairs. After praying and catching my breath, I turned back to the stairs I'd climbed to return to the entrance of the Omata Sansha. The stairs were slippery with moss, so we had to navigate them carefully on the way down. 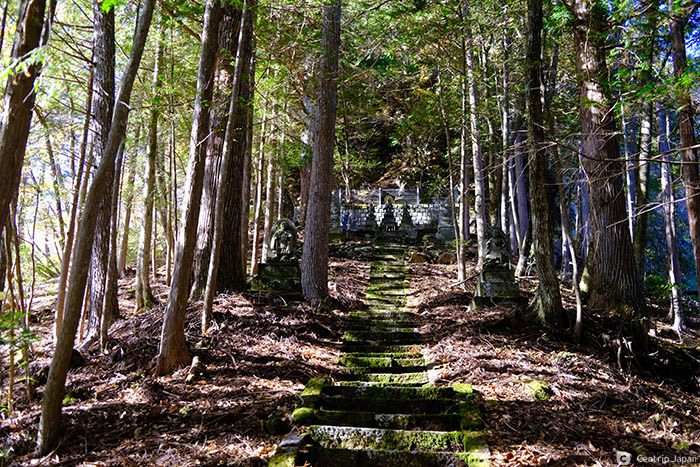 A statue of a god in the distance 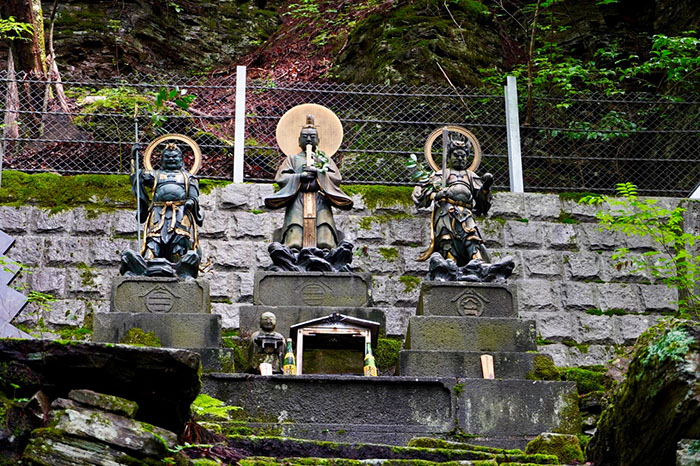 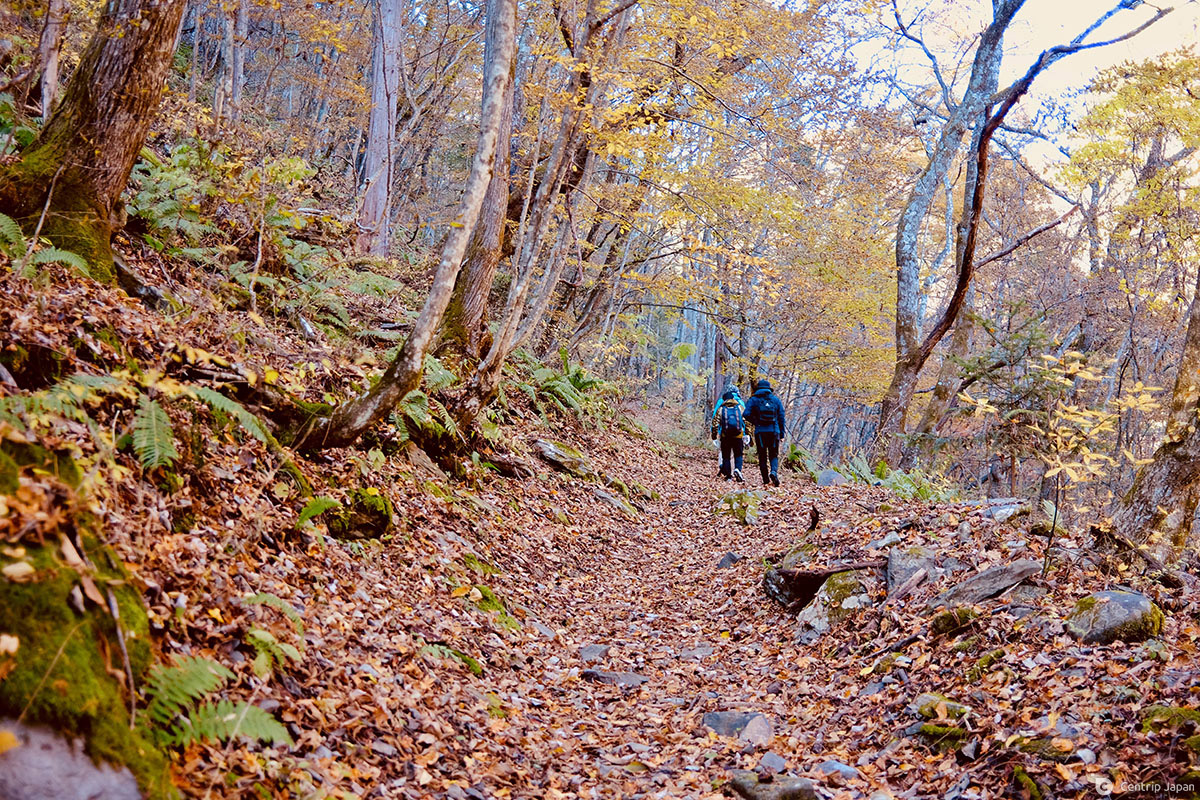 This is one of the routes recommended by the Kiso Ontake Tourist Bureau. It starts from the entrance of Omata Sansha and returns to Omata Sansha, passing through a graveyard and waterfall. Comfortable hiking shoes are recommended as the footing is not good in some places. 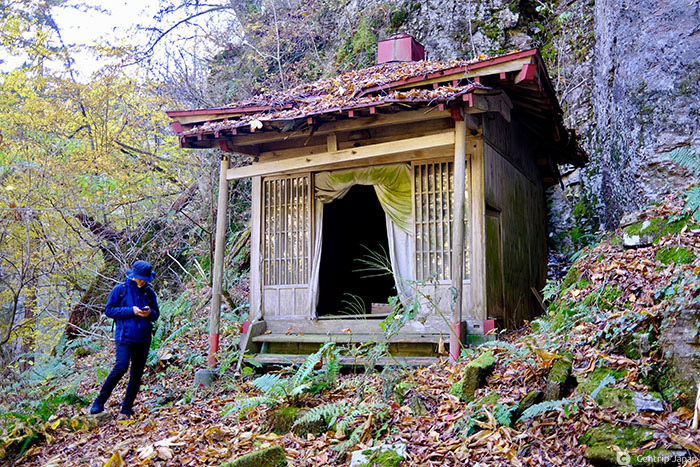 A small hall for ascetics 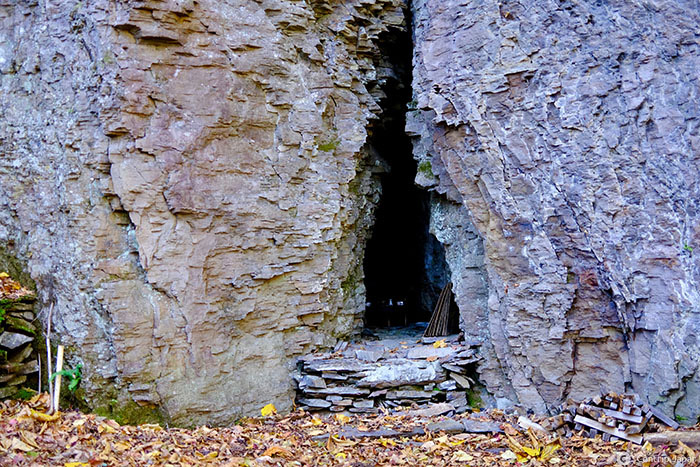 The course offers both natural and cultural attractions of Japan. Behind the cracks in the huge naturally formed rock walls, there are traces of religious rituals. Spiritual monuments are found all along the trail, and you can feel the mystical atmosphere of the trail. 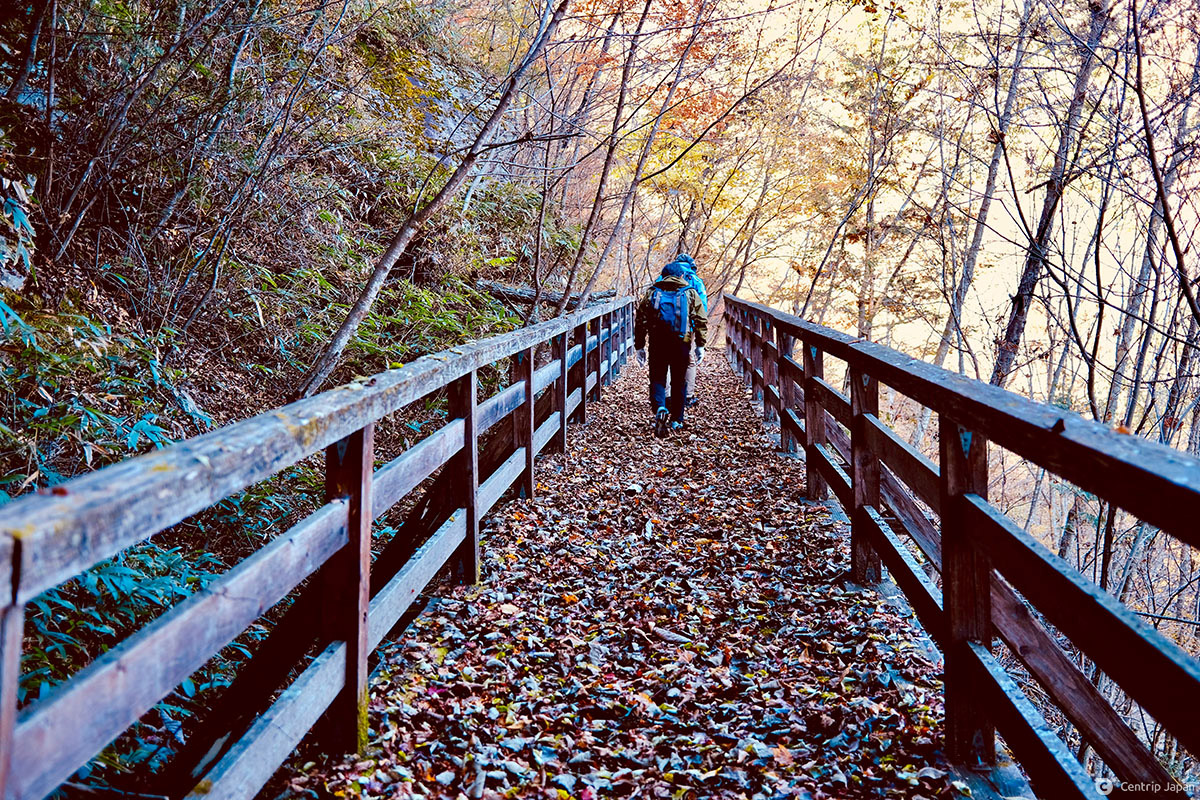 During the fall, it is pleasant to walk on a carpet of dry fallen leaves and listen to their crunching sound. In other seasons, offer different kinds of appeal. 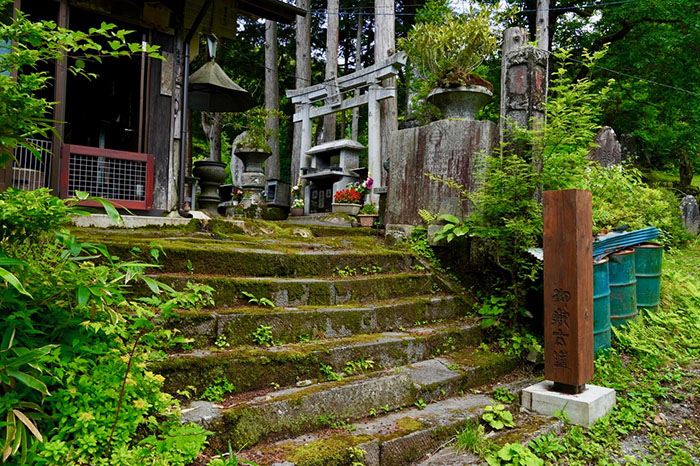 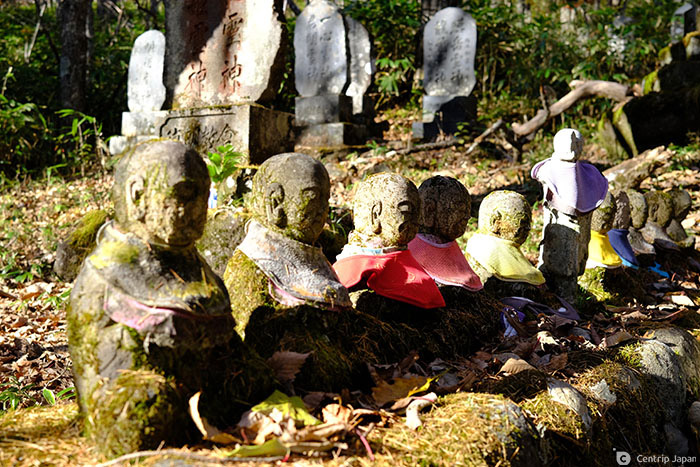 A 40-minute walk from Omata Sansha will bring you to Hanado Fukando. Hanado Fukando is one of the four graveyards of the ascetic Hanado Fukan, who opened the Otaki entrance of Mount Ontake to the public and spread the Ontake faith throughout Japan.
At the end of the cemetery, there is a branch office. If you walk towards the many monuments, you will see 11 cute little Jizo statues. We continued on the traditional route of the Ontake Kodo, but we turned left at the fork and headed for the brightly lit boardwalk.

The trail leading to the Ginga-mura Campground 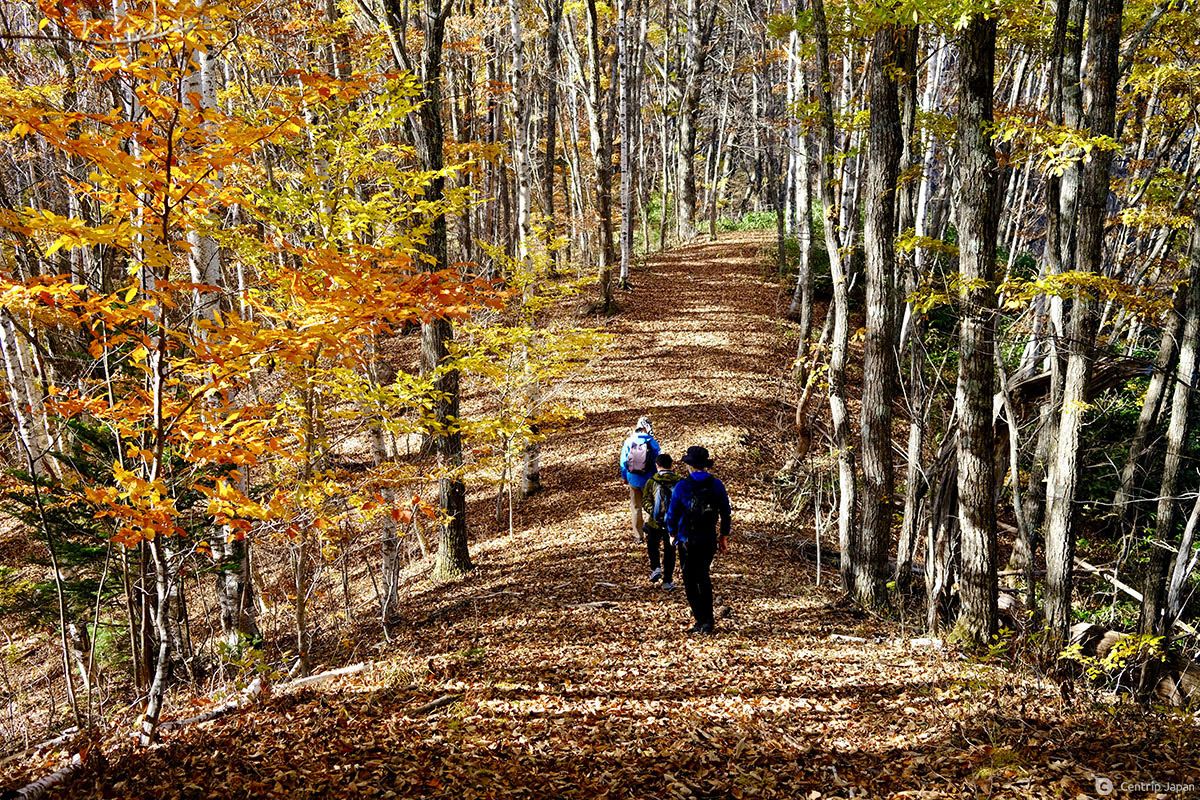 The trail continues to the campground. It took us another hour to walk from the fork, but there was little difference in elevation, and it was nice to walk along the trail surrounded by the colors of autumn. Ontake's summit could be seen through the trees here and there. 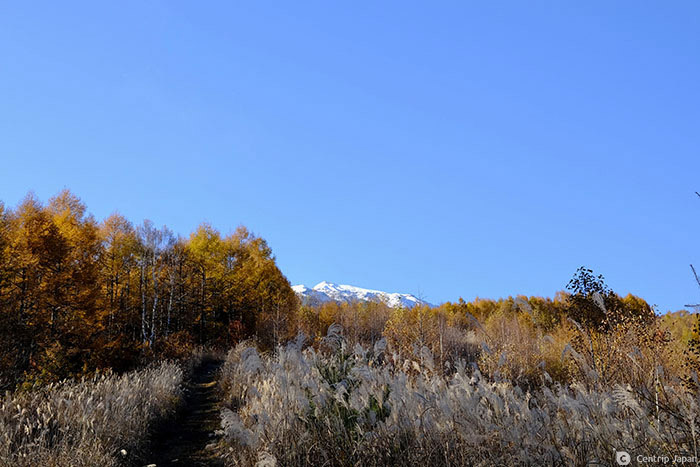 The top of Mt. Ontake seen through the Japanese pampas grass 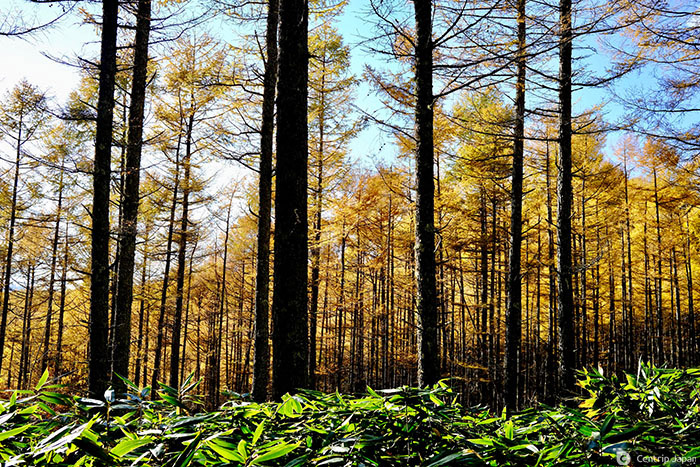 Finally, after climbing a few steps, we arrived at the Ginga-mura Campground. The campsite is located in an open area and offers a good view of the summit of Mount Ontake, which was already accumulating snow.
Ontake is a 3,067-meter high free-standing peak that can be seen from various locations in the Chubu region, including Nagoya. The unique shape of the summit, made up of several peaks, has become the symbol of the Ontake faith. While looking at the peaks of Mount Ontake, you will begin to understand the Japanese awe and worship of the mountain in the past. 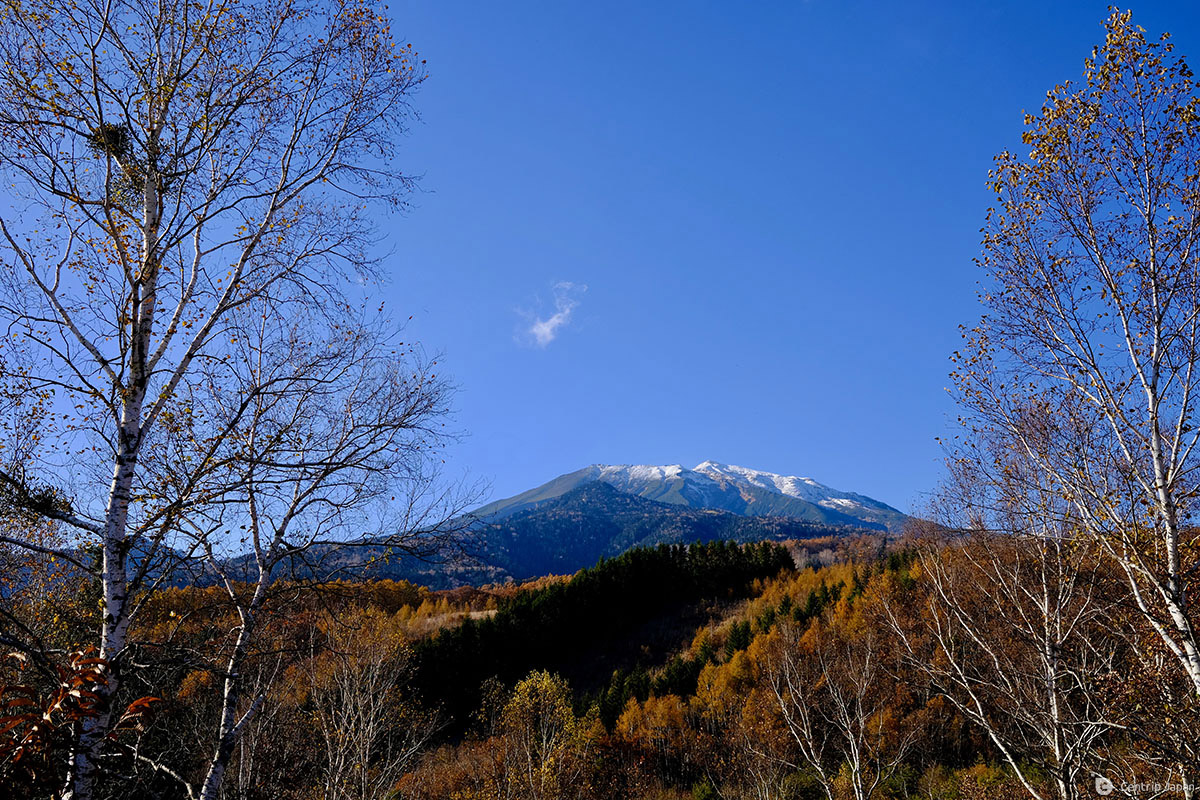 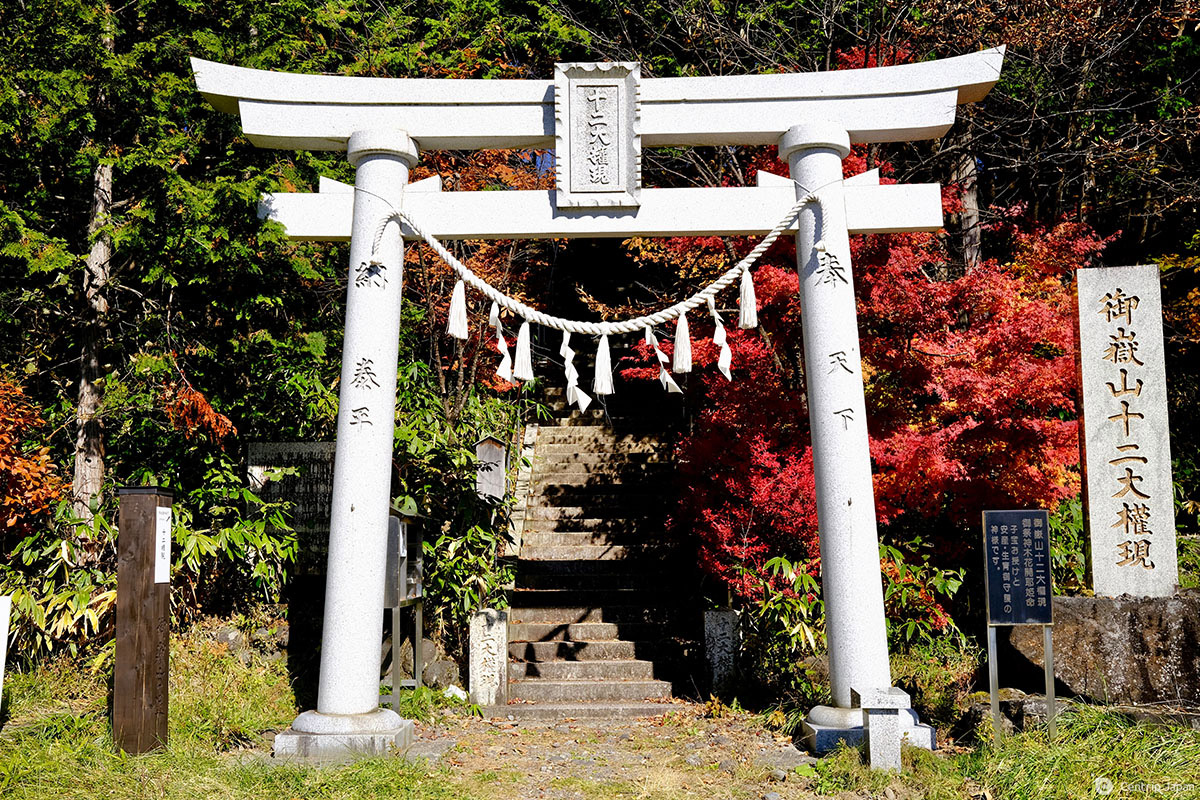 After 30 minutes from Ginga-mura Campground, you will arrive at an old shrine called Twelve Gongen. Gods of fertility and childbirth are enshrined here. In the main hall of the shrine, a doll called Saruboko is enshrined, and it is said that people who wish to have a child take one of the dolls home with them, and when their wish comes true, they make 12 dolls to return in thanks to the god. 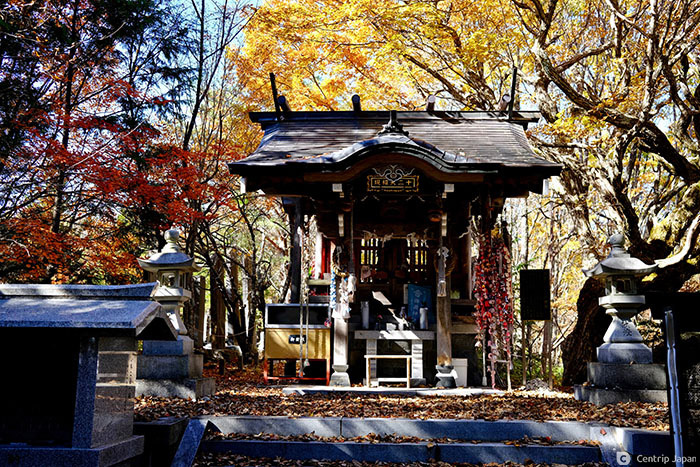 The main hall of the Twelve Gongen Temples 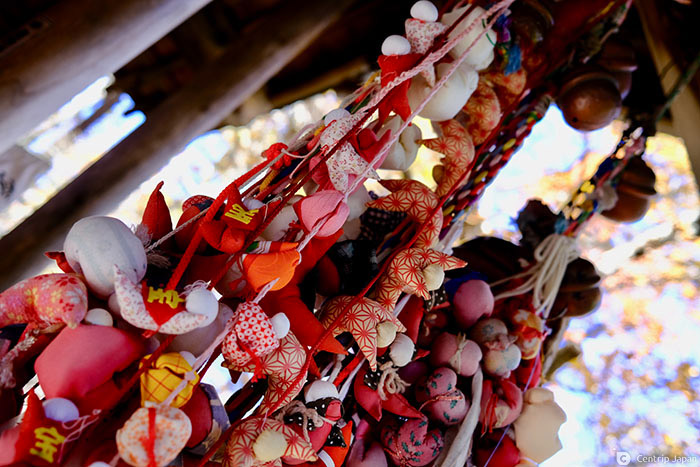 Saruboko, an offering in the main hall

The Twelve Gongen shrine is regarded as one of the sacred places of Ontake worship. There are many monuments of sacred gods and statues of various gods from Japanese to esoteric gods, such as the seven gods of good fortune and Susano-no-o-no-mikoto, which symbolize the Utaki faith, which has embraced various faiths. 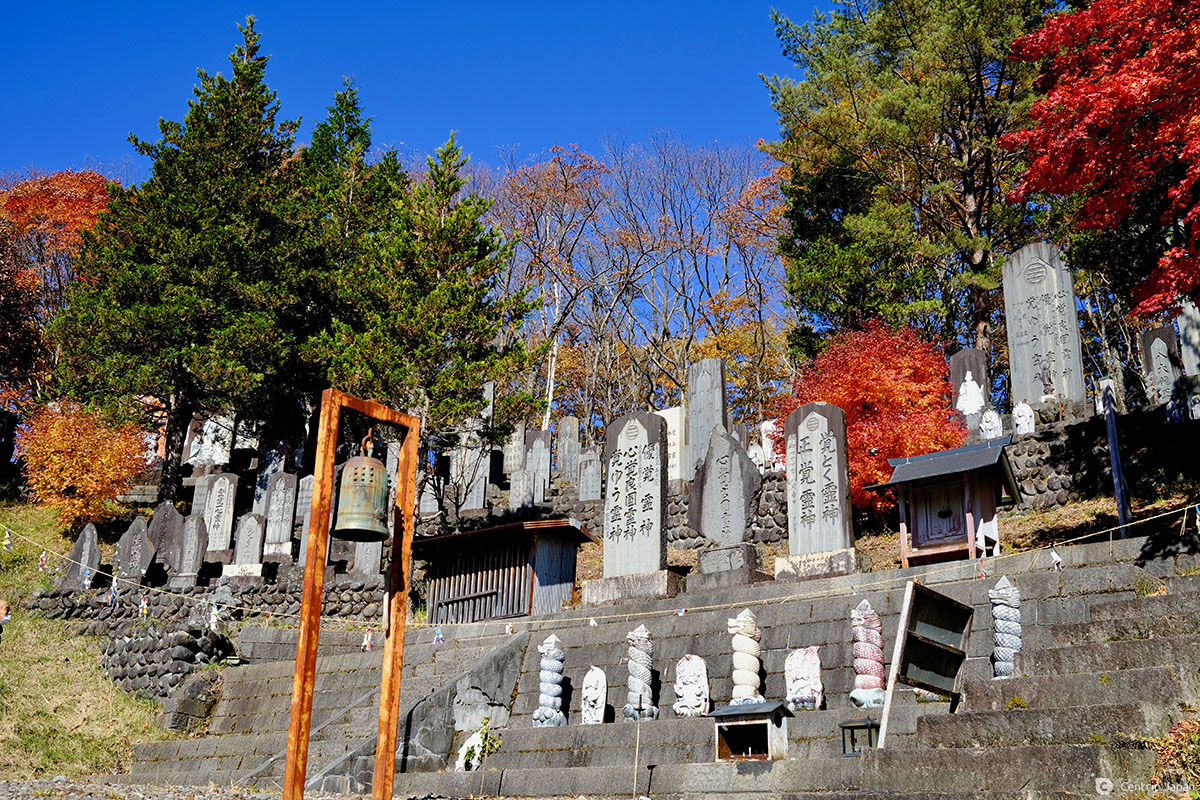 After hiking another 30 minutes from the Twelve Gongen, we arrived at Shin-taki. The waterfall was once the Shin in Shin-take was spelled with the Chinese symbol for "Holy", and not the symbol for "New" as it is now, a true waterfall of faith. Next to the waterfall, an ascetic's hut was for ascetics to sleep for 75 or 100 days of the year and is still in use. 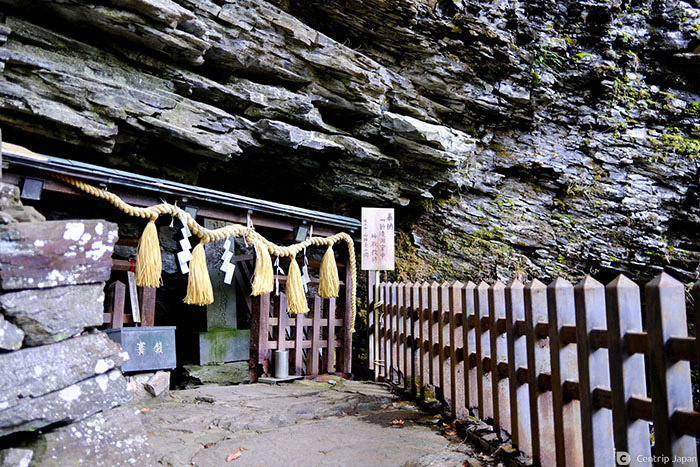 The rock cave where ascetics are said to have slept 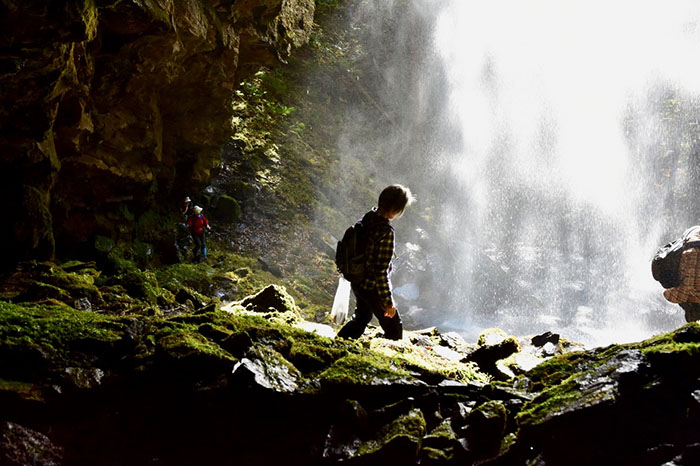 There is a hollow behind the Shin-taki, which can be entered. The reflection of the sun's light on the fine spray of water is a very mysterious sight. 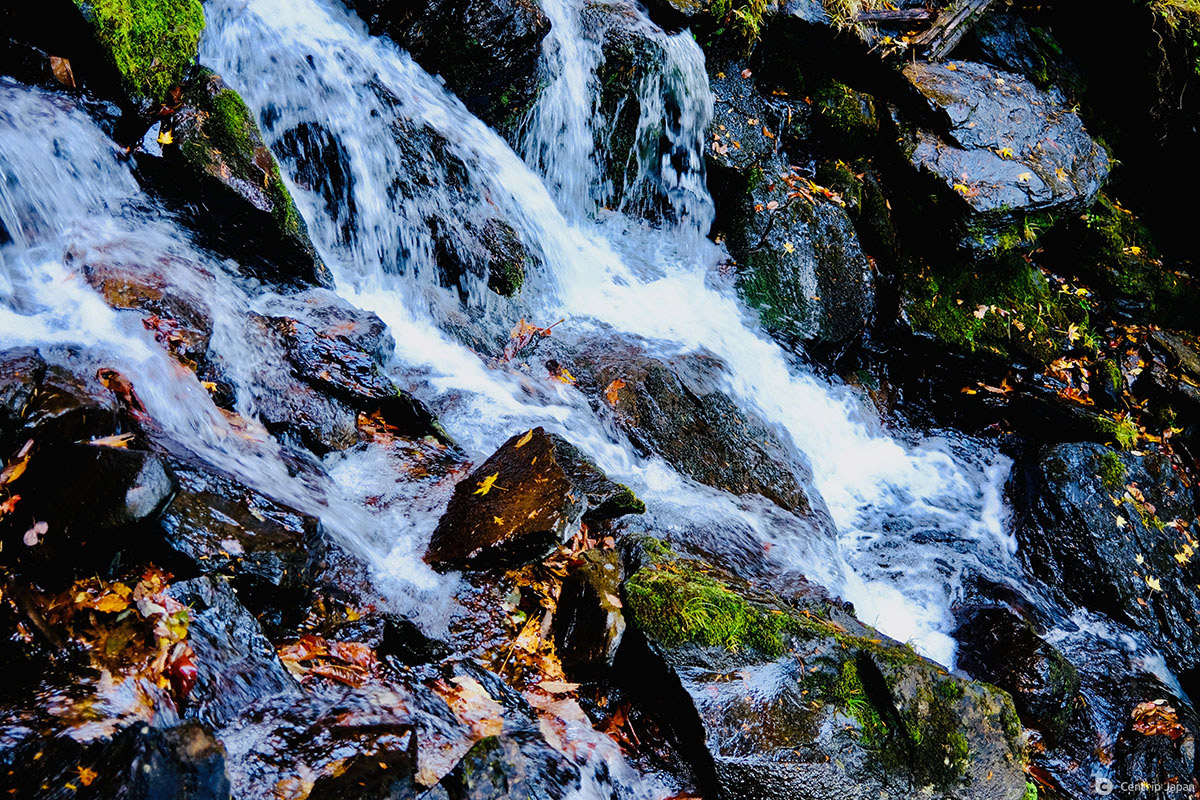 The last waterfall to be visited after Shin-taki is Kiyo-taki. It is said that in the past, mountain ascetics would purify themselves in this waterfall before ascending to the top of the mountain. Around noon, it is very beautiful to see the sun shining in front of the waterfall and observed the rainbow-colored lights. In the winter, the waterfall can be seen completely frozen over. 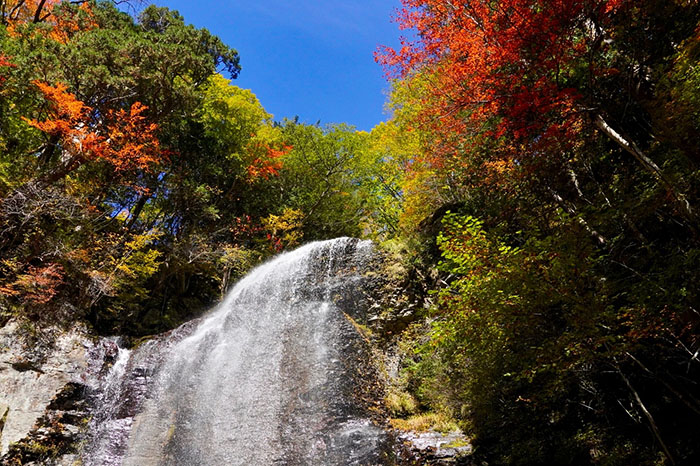 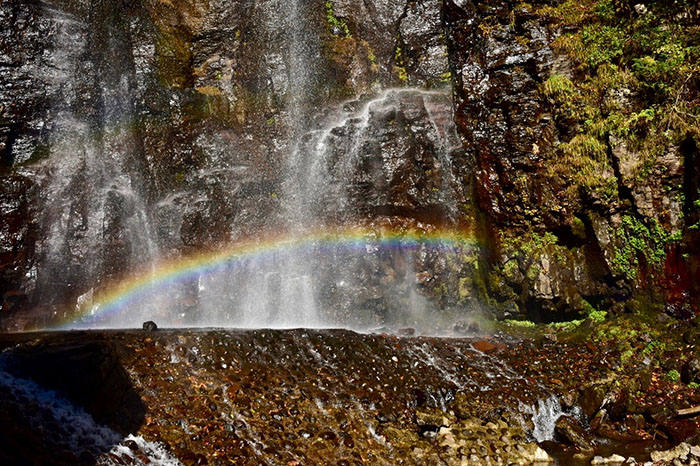 Also, in the summer season, you can experience waterfall purification rites, where you dress in white and stand in the path of the waterfall. 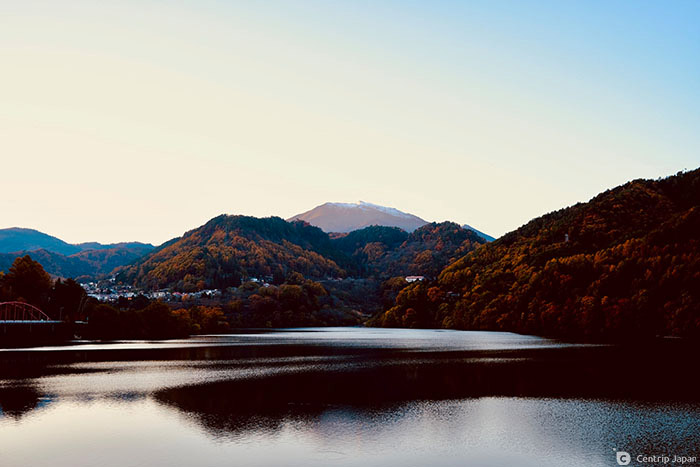 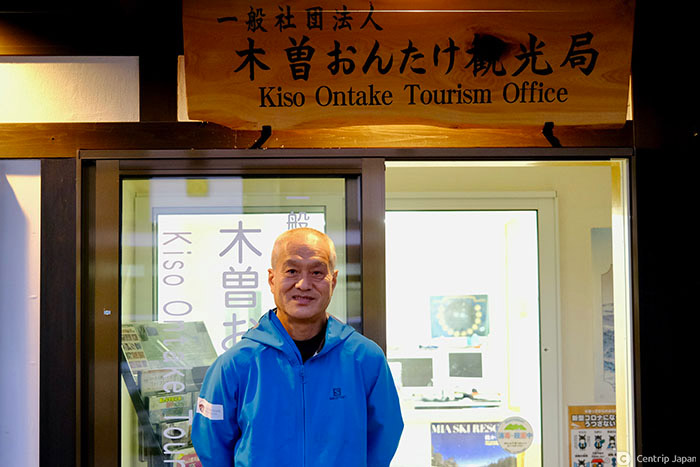 We returned to Omata Sansha and finished our walk along the Ontake Kodo hiking trail. On the way back to Kiso-Fukushima, I saw the shadow of Mount Ontake and the red leaves of the trees reflecting on the waters of Ontake Lake, which was very beautiful and divine. I hope you will visit the Kiso region, where you can feel the spiritual nature of Mount Ontake, experience the mountain faith, the harsh but rich nature, and the charms of Japan, in-depth.