Fukushima-juku is at the halfway point between Edo and Kyoto on the Kisoji, and the Fukushima Sekisho barrier was built at the northern end. Nearby Ontake, a mountain of faith, was a major transportation hub during the Edo period (1603-1867).

The highlights of the area include the Fukushima Sekisho Museum, which is a reconstruction of Fukushima Sekisho, the Yamamura family's residence, which served as the Sekisho's barrier guard and Kiso's deputy, the Uenodanchi district, which preserves the appearance of a post town, Kozenji Temple, where Kiso Yoshinaka is buried, and sake breweries that have developed in tandem with the history of the post town.

By car, get off at the Nakatsugawa IC from the Nagoya IC via the Komaki JCT (about 50 minutes), and drive for about an hour along Route 19, which used to be the old Nakasendo Highway. 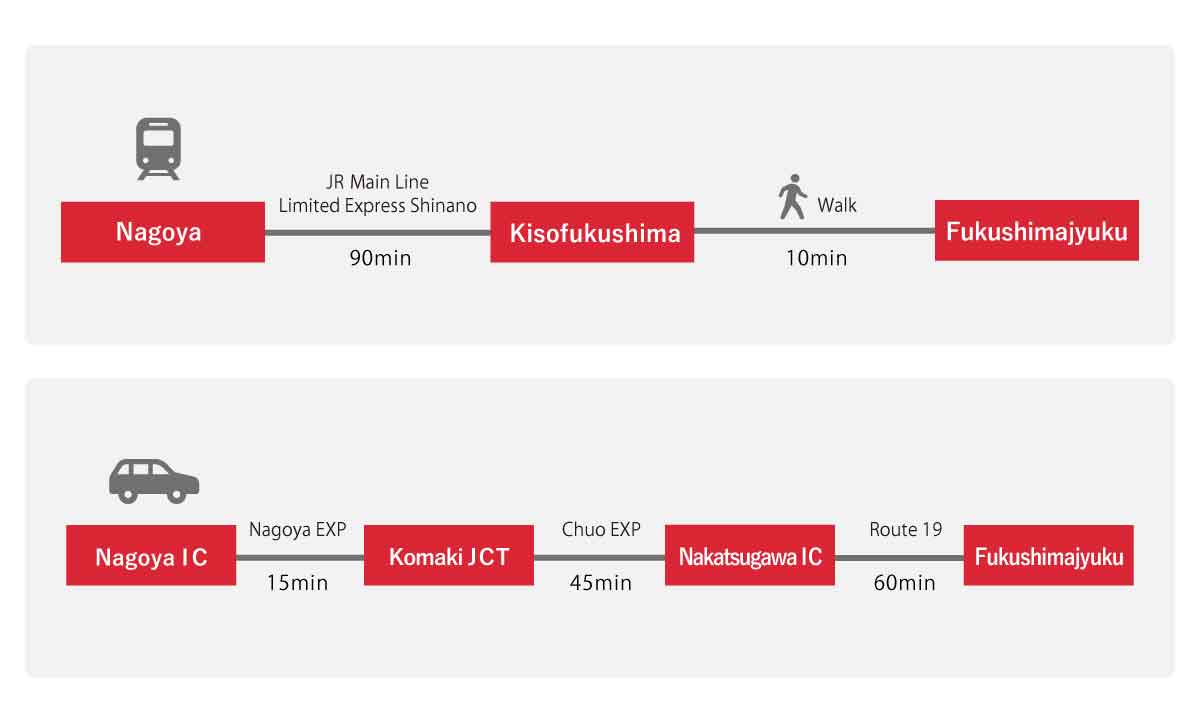 Traveling in Kiso with an interest in Japanese history, one is reminded everywhere of the presence of the Yamamura clan, the barrier guards of Fukushima Sekisho.

During the Edo period, the Yamamura clan practically ruled the Kiso region, including the 11 Kiso inns, for about 280 years, and by protecting the barrier and taking charge of the management of valuable timber, known as Kiso Goki, they gained enormous power. The family crest, the number one, written in a circle, indicated the highest authority in the region. The power of the Yamamura family at that time is present in the vast ruins of the Yamamura Daikan residence that remains today.

The Yamamura clan ruled Kiso and were featured as great rulers in Shimazaki Toson's famous novel Before Dawn, which is set in the 19th century. The local guide still calls him Yamamura-sama (Lord Yamamura) out of affection.

Let's tour Kiso Fukushima, which was ruled by Yamamura-sama. In the Uenodanchi area, you can feel the atmosphere of old Fukushima-juku.

A 10-minute walk from Kiso Fukushima Station will take you to a district called Uenodan where you can still feel the atmosphere of an old inn town. Fukushima-juku was originally a large inn town, but most of the buildings were destroyed in a large fire in 1927, and this area is the only place where the old buildings remain.

Still, it is easy to imagine the townscape of those days from the latticework made of fine vertical planks and storehouses with walls of traditional Japanese shapes. There is also a facility called Matsuri Kaikan, which has exhibits on traditional events such as Kiso dances and festivals (free admission). After passing through the streets of the upper section of the town, there is a slope, and on the way down, there is a kosatsuba (notice board). Kosatsuba was a place to hang wooden notices (kosatsu) with laws and ordinances written on them, they were placed in post towns where many people gathered. This kousatsuba is a reconstruction, said to be two-thirds the size of the original. Further on, a townscape is created after the great fire appears. Although the townscape is not from the samurai era, it has the historic feel of Japan's Showa period and looks as if it could be the setting for a movie. The Nanasho Sake Brewery mentioned below is also located here. Steep stairs appear after passing through the shopping street

As you pass through the shopping street, you come to a steep staircase on the right. At the top of the stairs is a hill overlooking the street you just walked down. If you continue through the narrow alleyway at the top of the cliff, you will come to an old house called the Takase Family Home, open to the public as a museum. Further on, you will reach the site of Fukushima Sekisho. View of Kiso Fukushima from the hill Fukushima Sekisho, the number one surrounded by a circle is the family crest of the Yamamura clan.

Fukushima Sekisho was the main barrier for monitoring traffic on the Nakasendo Highway in the Edo Era. They strictly enforced the laws against bringing guns into Edo and capturing escaped hostages (the wives and daughters of feudal lords living in Edo. The barrier was set up to block a narrow area at the top of a cliff awaiting travelers.

Today, there is a museum that recreates the atmosphere of the barrier, displaying valuable materials such as wooden passes and weapons. A combination ticket for Fukushima Sekisho Shiryokan, Yamamura Daikan Yashiki, and Kozenji Temple is available for 900 yen, making it a good idea to visit all three facilities. From behind the tatami mats, officials kept a close watch on the travelers. Gate of the Daikan Yashiki

After leaving the Fukushima Sekisho Museum, cross the Kiso River in front of the museum and walk for about 10 minutes to Yamamura Daikan Yashiki. It is a large mansion, but even so, it is only part of the original site. It is interesting to see replicas of the sumptuous dishes that the villagers prepared to entertain the governor. Visitors can feel a part of the power of the Yamamura family which served as the Sekimon (barrier guard) of Fukushima Sekisho throughout the Edo period (1603-1868). The lifestyle of those days has been reproduced. A beautiful garden spreads outside the window. Kozenji is one of Kiso's most historic Zen temples, home to the cemetery of Kiso Yoshinaka, one of the heroes of the Genpei wars that split Japan in two at the end of the 12th century. It is also home to the cemetery of the Yamamura clan, which ruled Kiso throughout the Edo period. Visitors entering the well-maintained temple gate will be surprised to find such a grand temple in such a quiet town. There are four Japanese gardens on the temple grounds, each with its own unique style, but the most eye-catching is a stone garden called Gan-un-niwa. It is said that this garden is the largest dry landscape garden in Japan with no trees or grass. The sea of clouds is symbolized by stones and gravel, and the mountains of Kiso are visible beyond the sea. Strolling along the Nakasendo Road to visit inn towns is even more enjoyable when you add visits to sake breweries. Sake breweries were developed to quench the thirst of travelers in the post towns where many travelers came to rest their feet. In Kiso Fukushima, there are two sake breweries, Nanasho Shuzo ("Nanasho") and Nakazen Shuzo ("Nakanori-san"), each brewing unique sake. They are open for tastings and tours, so feel free to stop by (*Some restrictions may apply depending on the COVID19 situation). From Kiso Fukushima Station, a 20-minute ride on the JR Chuo Line will take you to Narai Station. Around Narai Station, Narai-juku, the longest post town along the Nakasendo route, still remains. Although Kisofukushima is often overlooked, it has long been the political center of Kiso and has many historical sights to see. Each spot is within a short distance from the other, and half a day is enough time to visit all of them. It is also the gateway to the Ontake Kodo (Ontake Historical Trail), which leads to Mt. Kiso. As a starting point for sightseeing in Kiso, we recommend that you visit Kiso Fukushima first.