Mishima is for Tourists 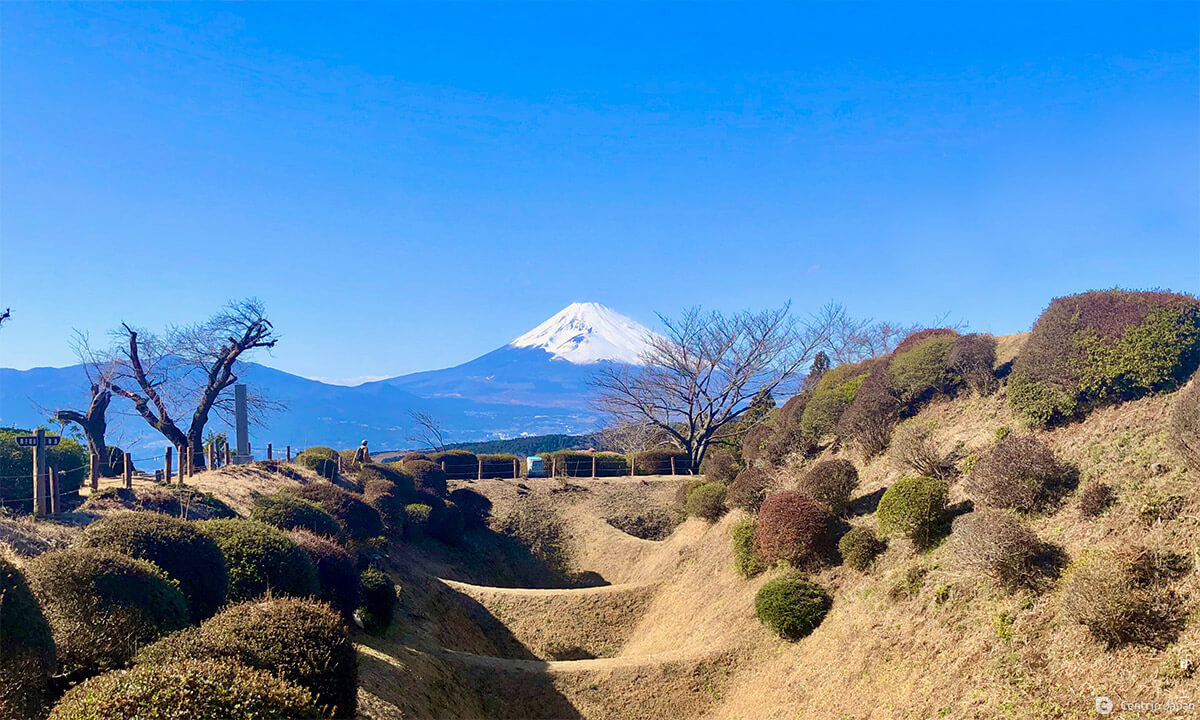 Mt. Fuji is always at the top of people's bucket lists when visiting Japan. But where is the best place to see Mt. Fuji? That is an argument with many answers in Japan. In this article we will recommend Mishima. Mishima is ideal for a day trip as it's located on the Tokaido Shinkansen rail line. It is surrounded by numerous famous tourist destinations, Hakone in the northeast, Atami in the east, Numazu in the west, and the Izu Peninsula in the south. So it tends to be overlooked by tourists, but don't let that phase you, there are many things to see. Join us as we introduce to you the views of Mt. Fuji, how the terrain was naturally shaped by volcanic eruptions, the blessings brought by Spring thaws, and the majestic Mishima Taisha Shrine. Centrip will line-out the best way to spend your day sightseeing in beautiful Mishima. 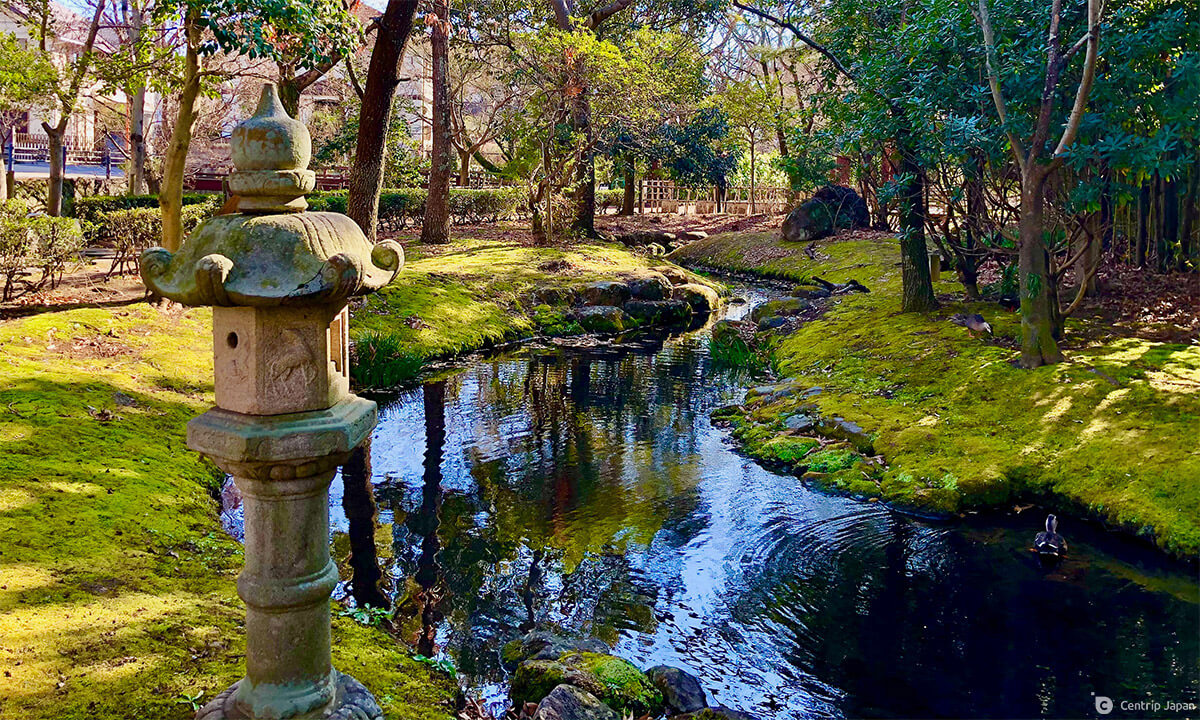 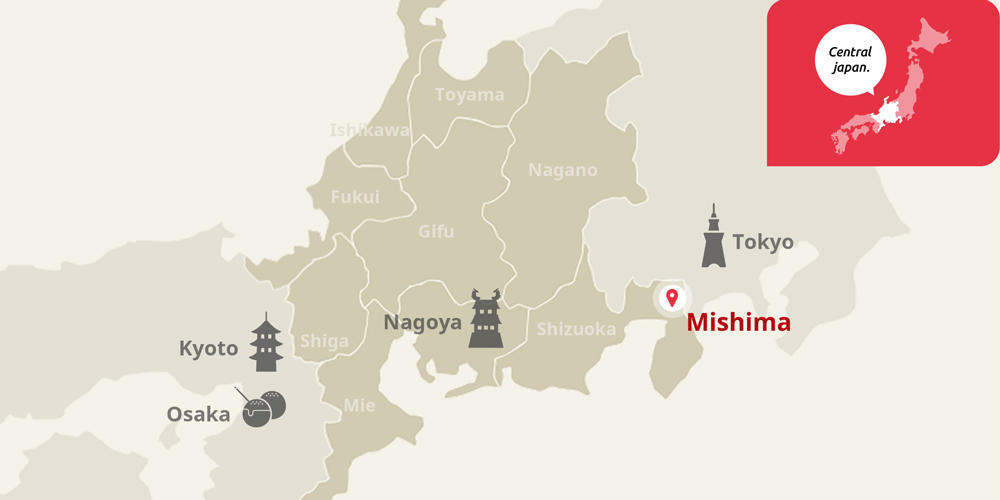 Take the Tokaido Shinkansen from Nagoya to Mishima. Choose between the Hikari (1h 20min) or Kodama (1h 45min), which stops at every station. The Hikari arrives earlier, but be careful, not all Hikari trains make stop at Mishima Station. Either way, the fare comes to ¥7,910 including the price of the Shinkansen. Mishima can also be reached from Tokyo Station in under an hour, by Hikari or Kodama trains on the Tokaido Shinkansen.

From Mishima Station to Skywalk

You can see Mt. Fuji as soon as you get off the train in Mishima. Head to the south exit after disembarking. When you exit, turn around and check out Mishima station, it was built in the shape of Mt. Fuji! Then take a bus from the rotary in front of the station and head towards Skywalk. The bus departs from platform 5 and costs ¥570 one-way from Mishima Station to Skywalk. However the Mishimaru Ticket for ¥1000 is recommended as you'll get unlimited rides for one day, and you'll get a lot of use from it on our day-trip plan. The Mishimaru Ticket can be purchased at the tourist information center in Mishima Station. 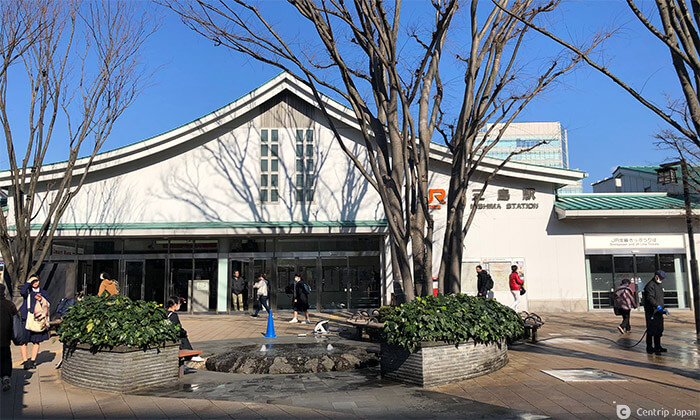 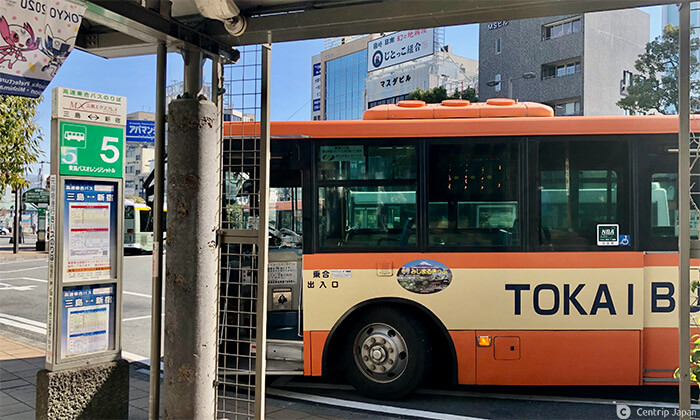 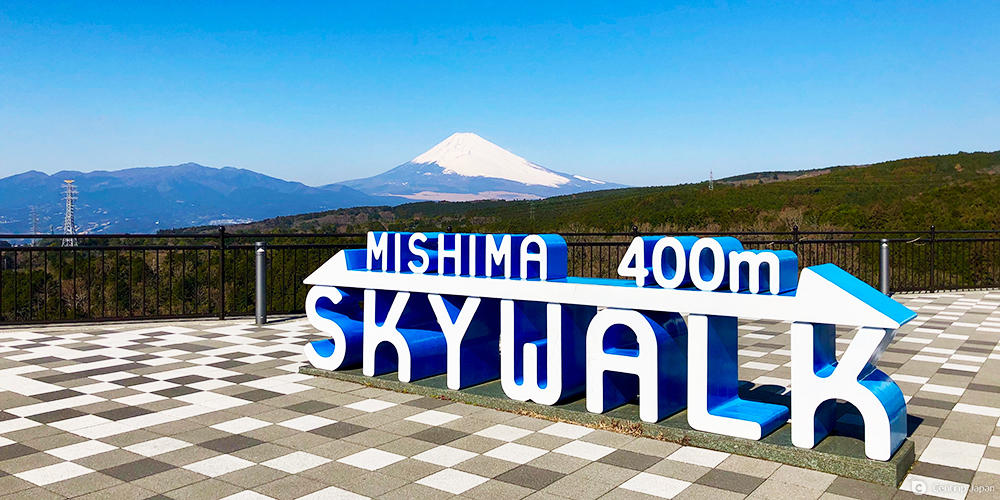 Your first destination should be the Mishima Skywalk. It is a suspension bridge that was completed in 2015. It is 400 meters long and ranks as the longest pedestrian suspension bridge in Japan. Entry costs ¥1,100 for a round trip for adults and has different fees for children depending on age. 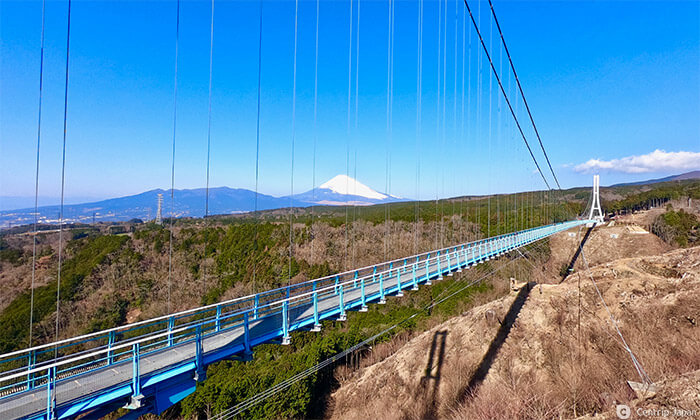 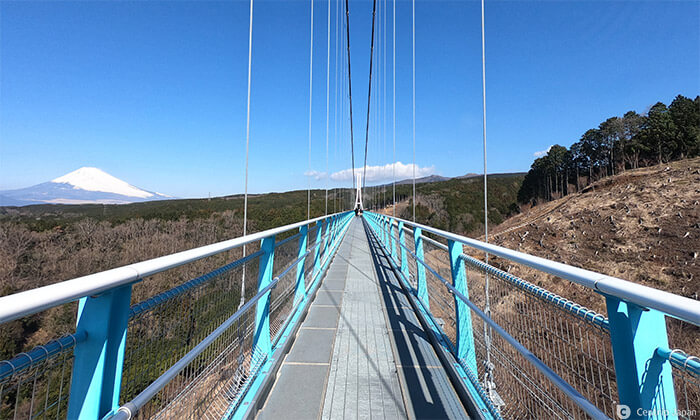 The view from the front of the bridge

Modern buildings and Mt. Fuji, seen from a 400-meter suspension bridge, create an interesting contrast. The view from the west side of the bridge provides spectacular views of Mt. Fuji to Suruga Bay. The park at the north end of the bridge is full of many activities, such as Long Zip-Line and Forest Adventure. 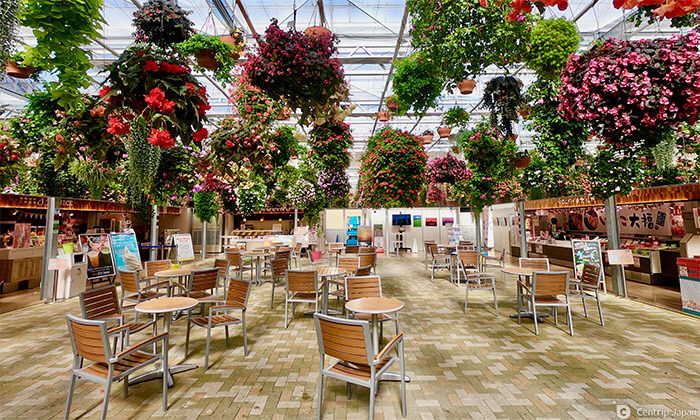 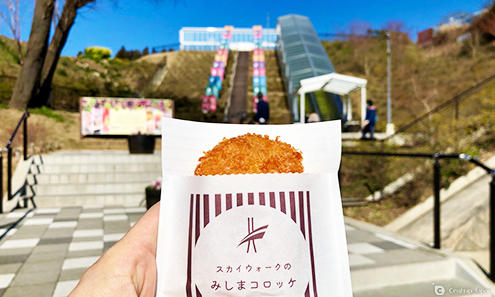 The south area includes an observation deck that overlooks the bridge and Mt. Fuji, as well as an indoor garden filled with beautiful flowers. Mishima croquette, a local delicacy, can be found for sale.

Take the bus from Skywalk to the ruins of Yamanaka Castle. At the ruins, you can enjoy a slice of Japan's historical heritage under the watchful gaze of Mt. Fuji. Yamanaka Castle was built by the Daimyo, Hojo Ujiyasu, during the Japanese Warring States period. The castle was never restored after its destruction in the Edo period, but the unusual shape of the moat and earthworks of the castle are still interesting, for their resemblance to a checkerboard. It is only 5 minutes away from the Sky walk by bus and the Mishimaru ticket also can be used. 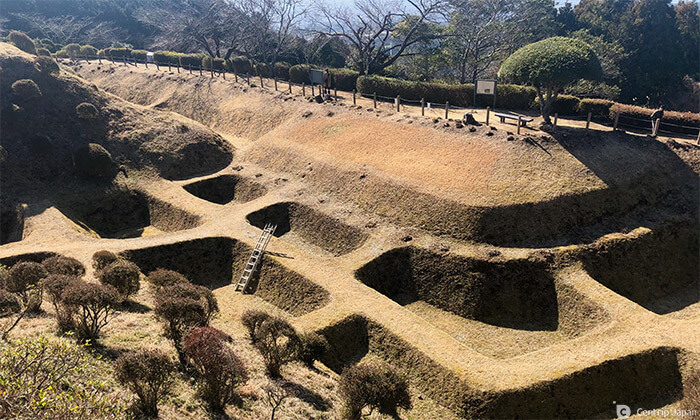 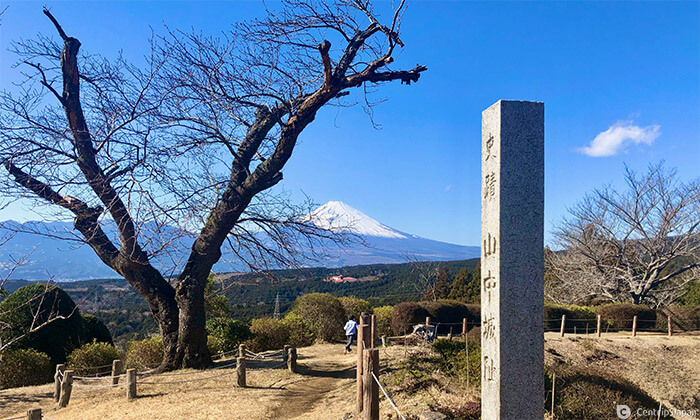 A commanding view of Mt. Fuji from the castle ruins

The castle grounds are very uneven in places, turning visits to the ruins into light hikes. But the view of Mt. Fuji, as you can see, is gorgeous.

The Remains of the Old Tokaido Road 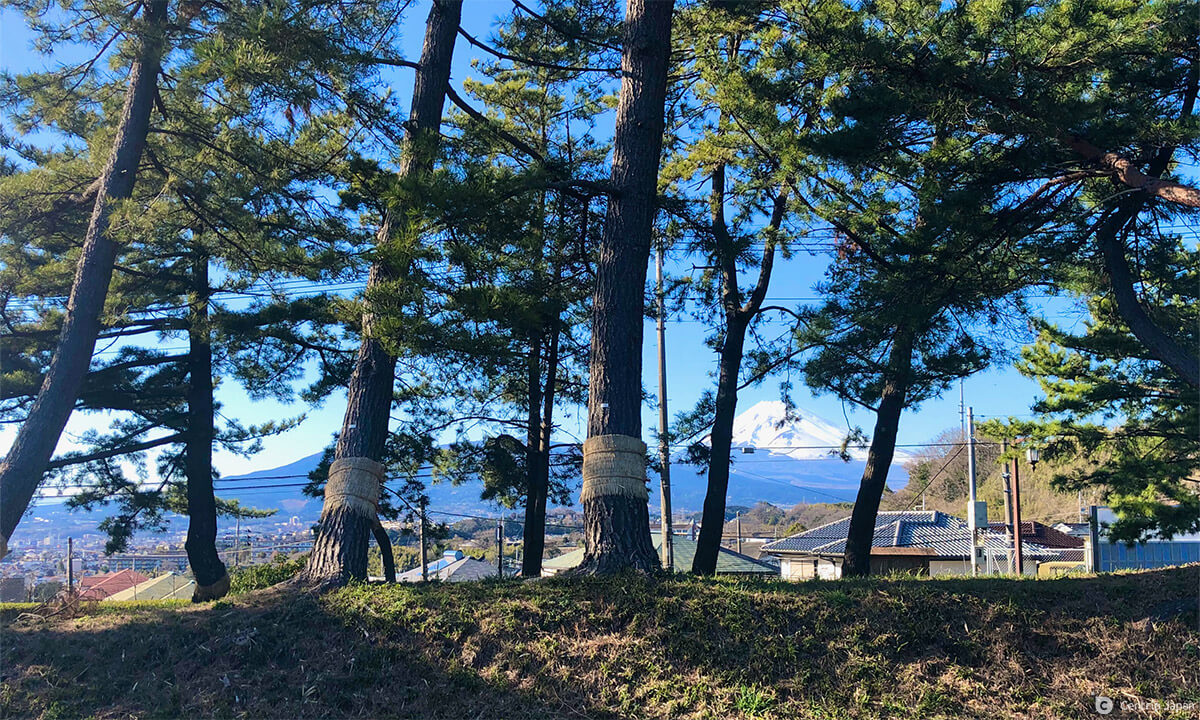 Mishima was an important post town on the old Tokaido Highway, a historic highway that connected Tokyo and Kyoto. The cobblestone roads, around the ruins of Yamanaka Castle, help to preserve the atmosphere of the ancient highway. Interesting fact: The bus line that connects Mishima Station, Skywalk, and Yamanaka Castle is the same route as the old Tokaido Highway, and the pine trees on the route also date from that period with milestones set about every 4km (One Rin in old units of Japanese distance) for travelers to mark their distance. You can catch glimpses of Mt. Fuji from between the pine trees as you pass by. 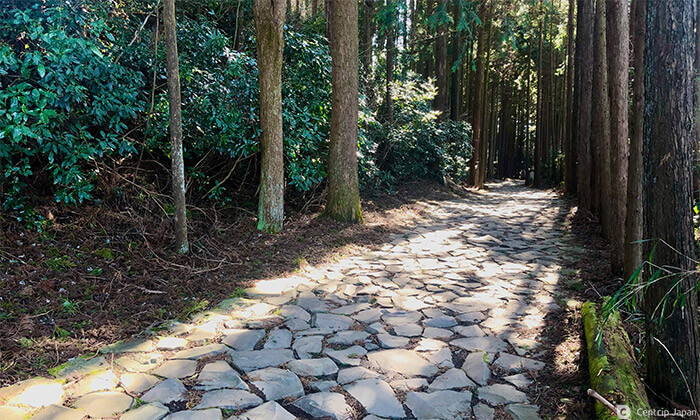 The cobblestone paths near Yamanaka castle 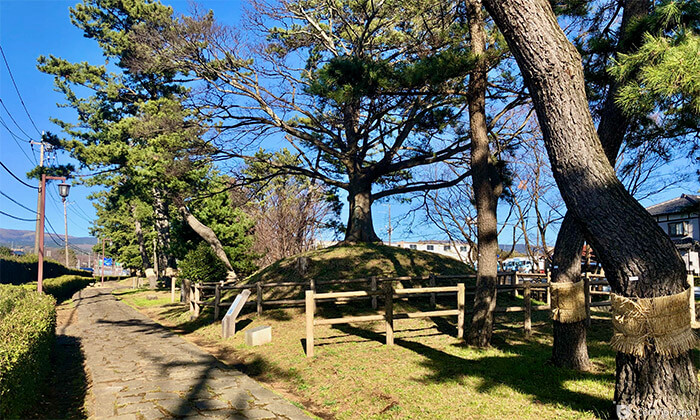 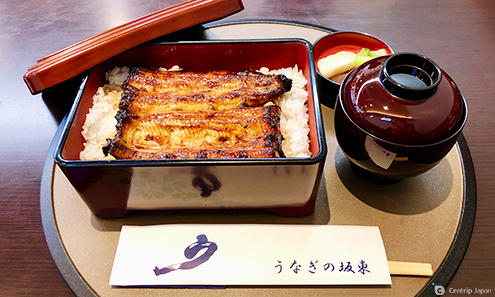 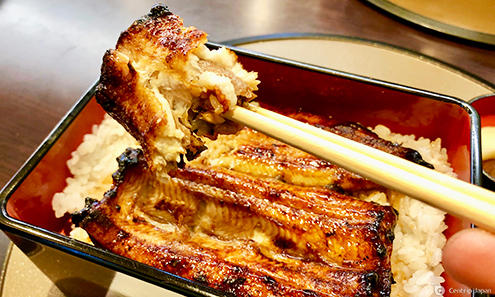 After visiting Skywalk and the castle ruins return to Mishima Station. We recommend eel for lunch while in Mishima. Mishima eels are said to be delicious and tender because they are left to swim in the clear underground water of Mount Fuji before being cooked. Many restaurants around the station specialize in eel. 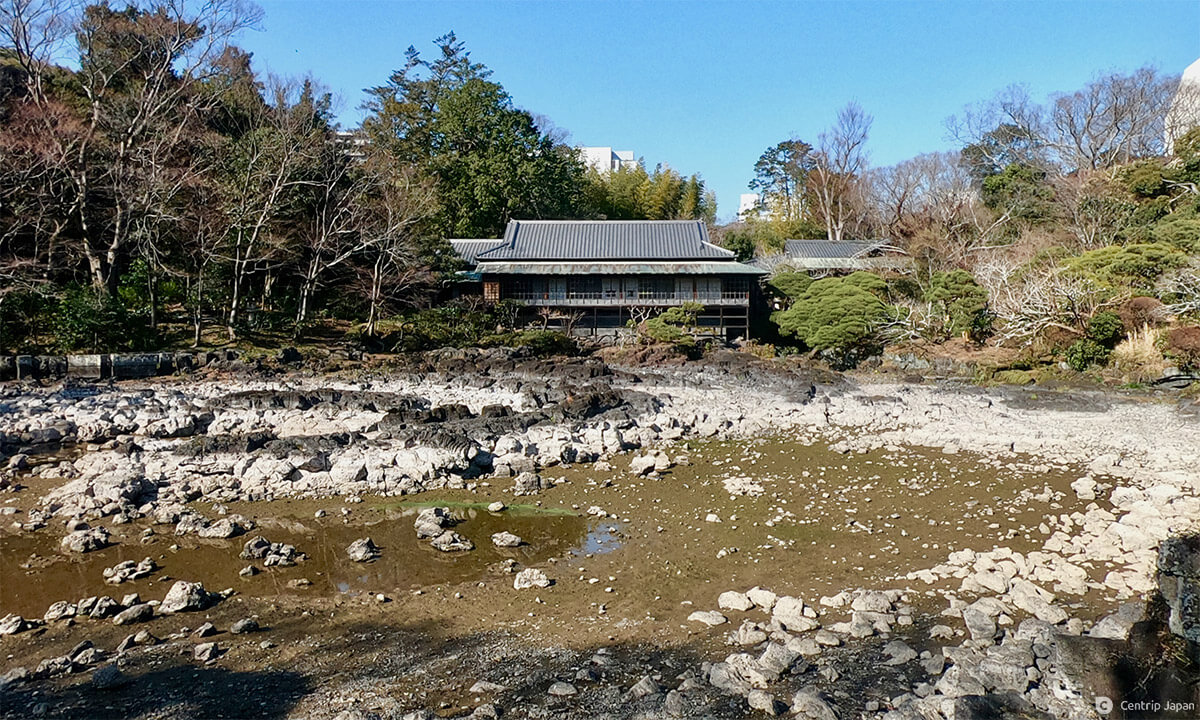 Immediately after leaving the south exit of Mishima Station, there is a vast garden called Rakujuen. Originally a Japanese Imperial mansion, it is now managed by the city and was opened as a park. The park was built over an area that was covered by a lava flow from Mt. Fuji in 1890. 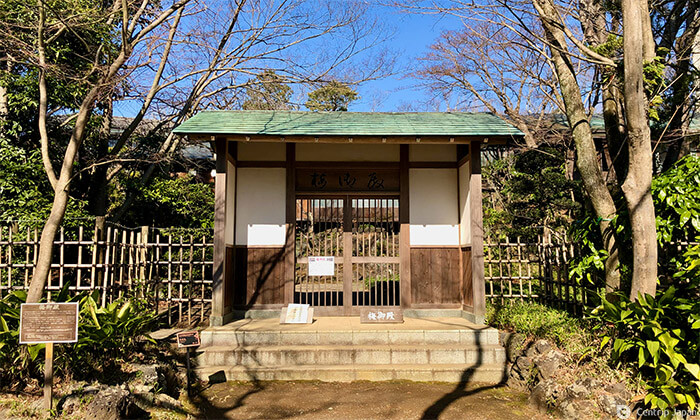 The view from inside the garden 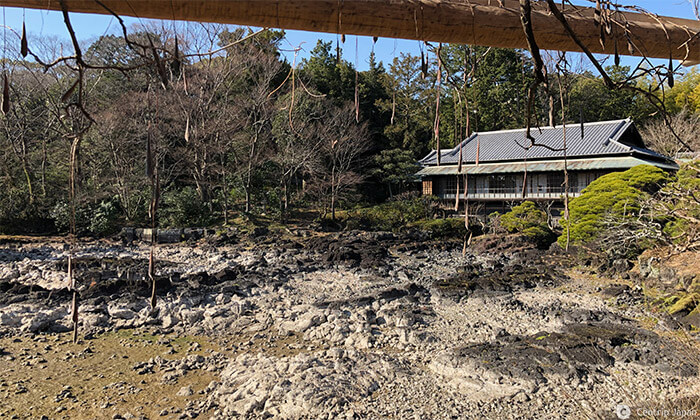 At the center of the park is Kohamaga pond. The pond was once a water reservoir but is now almost depleted. As a result, lava rocks at the bottom of the pond can now be seen. 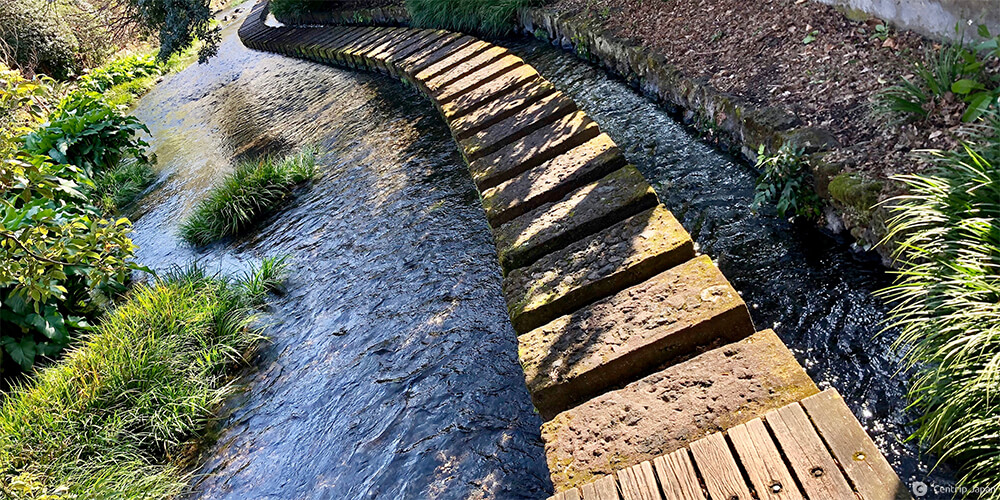 Mishima is a town defined by water. Water melts and flows down the craggy surface of Mt. Fuji throughout the town. Strolls along the waterside are one of the pleasures of sightseeing in Mishima. A 5km walking course is available and takes about 2 hours to complete. Leave by the south exit of Rakujuen, and you'll hear the babbling of the Genbe River. Mishima is called a City of Water, and the Genbe river acts as its symbol. You can start your leisurely river stroll here. 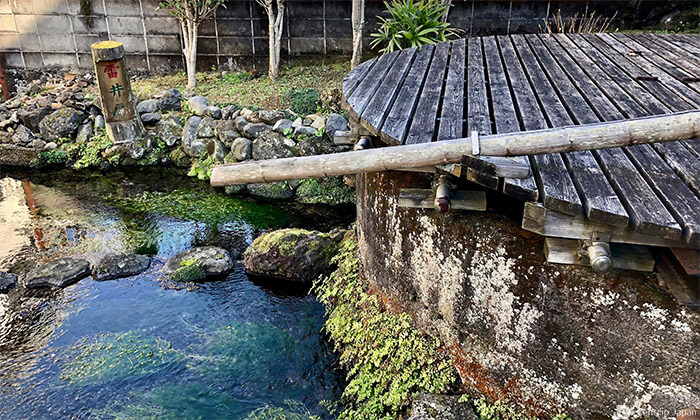 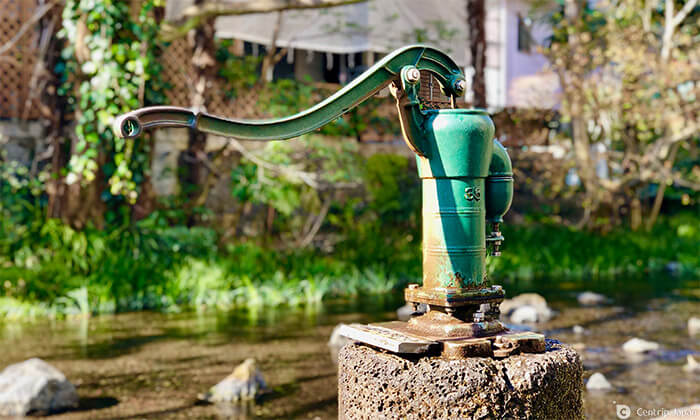 Walking along the water's edge, you will find many photogenic spots. A large well, 3 meters in diameter, an old water pump, and a bell tower, get your camera's ready capture some memories. 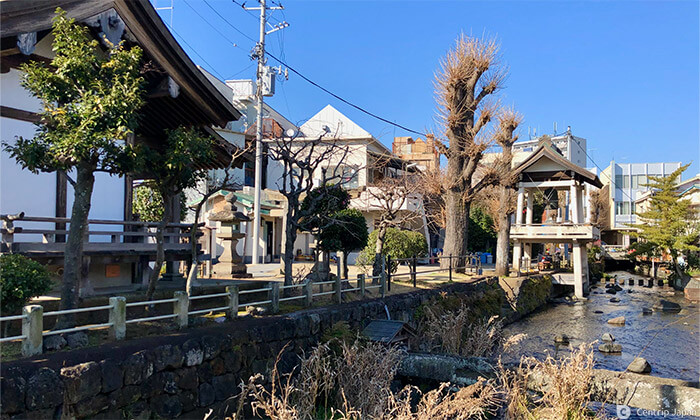 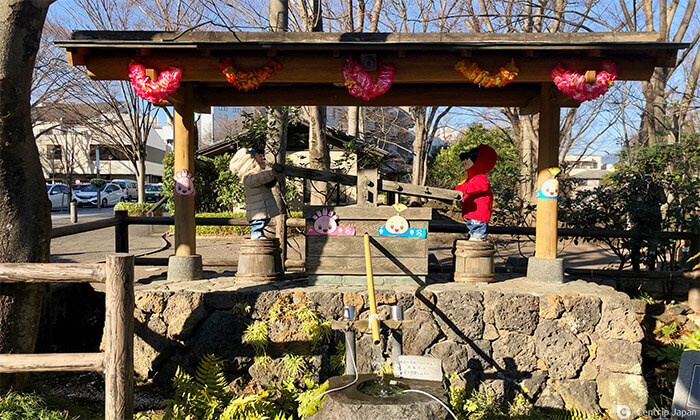 Monuments to the Water Town

Check out this video to get a feel for the waterside walk. 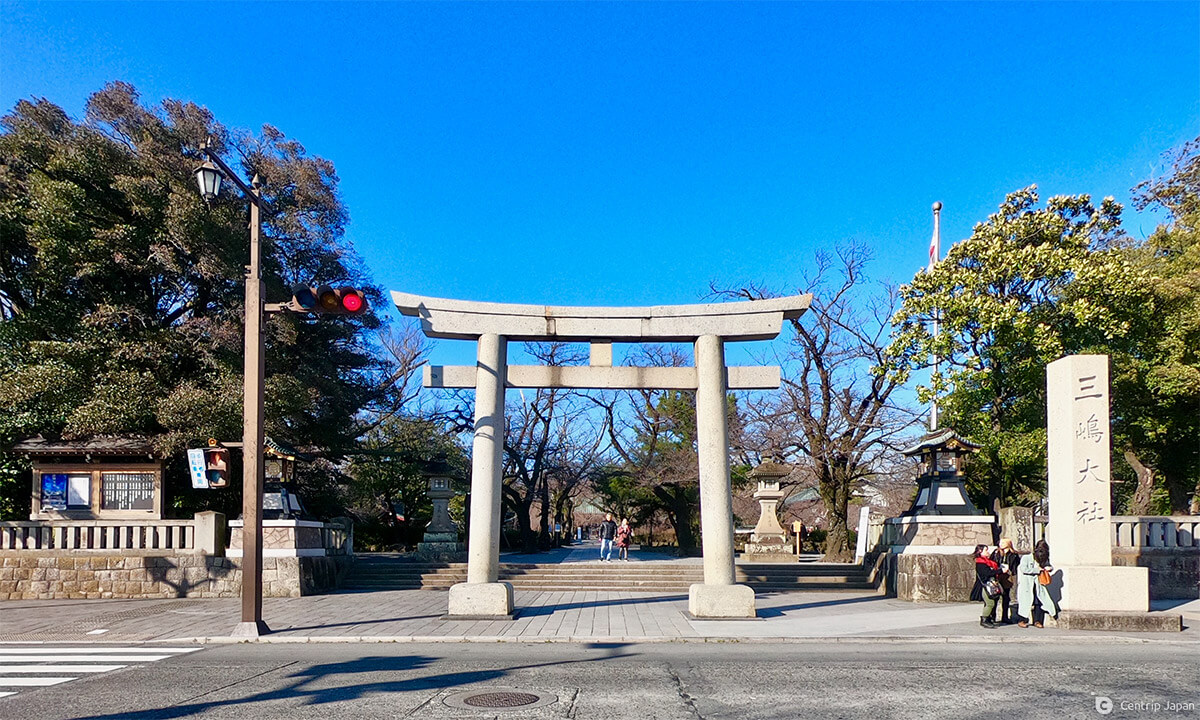 As you stroll along the waterside you will arrive at Mishima Taisha. Mishima Taisha is the most historic and prestigious shrine in the area. Minamoto no Yoritomo, who ushered in the age of the samurai in the 12th century AD, is said to have prayed for victory at this shrine before fighting nemesis, the Taira Clan. 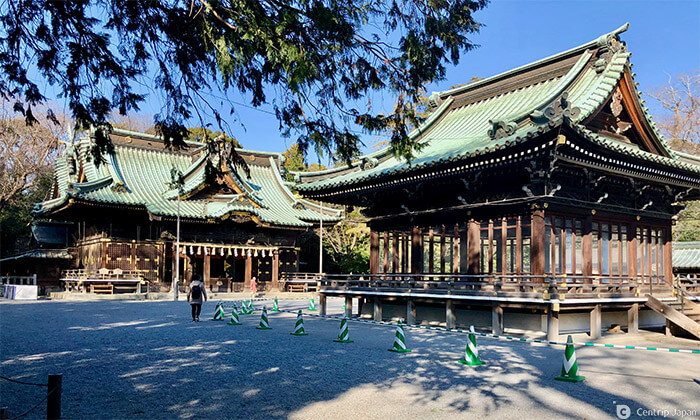 The main building of Mishima Taisha 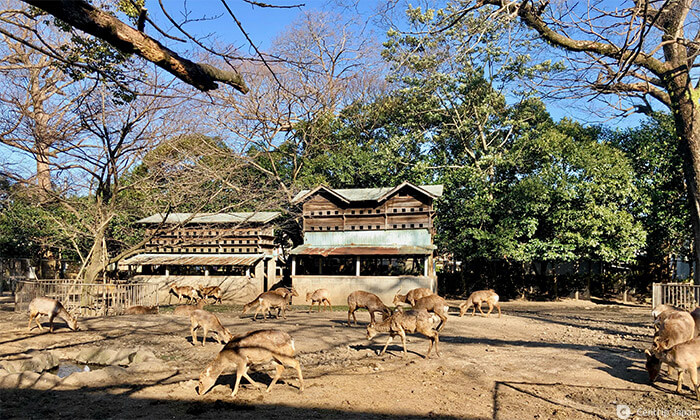 The temple gardens, home to deer

The temple grounds are very large, and many buildings, such as the main shrine, are designated as important cultural national properties. In the small pond called Shinchi, a small & beautiful shrine lies afloat. Deer brought from Kasuga Grand Shrine in Nara live in the park and don't worry, you are encouraged to feed the deer! 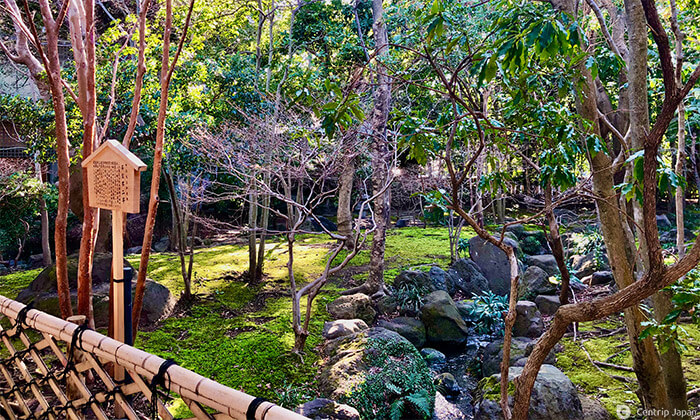 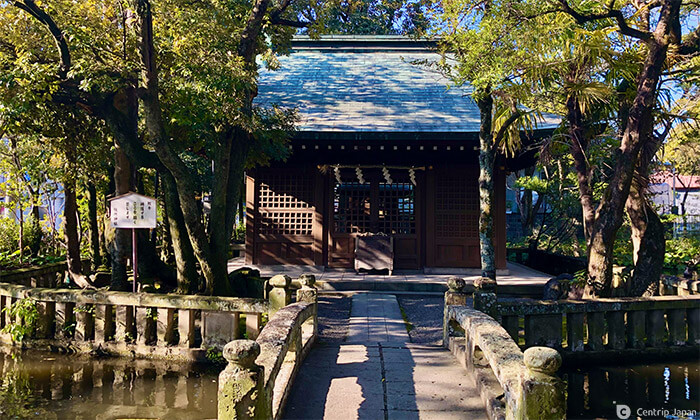 Many small Shinchi in the temple grounds

There are many things to do while sightseeing in Mishima. Beautiful views of Mt. Fuji, monuments to the importance of Mt. Fuji's waters to the town, the magnificence of Mishima Taisha, and the history of the Tokaido road and Warring States Period. Mishima is one of few rare spots in Japan where you can experience history and culture, while under the watchful gaze of Mt. Fuji. Mishimias proximity to other destinations like Hakone, Atami, and Izu make it a wonderful stepping stone to the rest of Central Japan. After sightseeing in Mishima, don't forget to plan to see the other great sites in Central Japan.