During the Warring States period (the late 15th to the late 16th century), the ninja supported warlords as specialists in numerous intelligence-gathering and combat operations. In modern terms, they were spies and left behind no traces, so much of what they did is still shrouded in mystery. Though the ninja are shrouded in a veil of mystery, there are many locations to explore and experience ninja culture in the Chubu area. The area is home to the Iga and Koka ninja, the most famous of all ninja schools. Before you make your trip to Chubu, brush up on some basic information about the ninja schools and learn about the places you can visit.

The Public Face of Ninja Most people think of ninja as warriors with black costumes and formidable skills, but most were merchants and farmers. Fighting was the last resort for ninja. In most cases, their primary role was intelligence gathering to gain a picture of enemy movements and to manipulate information to obstruct enemy operations. So, it is no wonder tradespeople at teahouses, where many people pass through, and at inns where influential people would stay, were actually working as ninja. A reproduction of a ninja costume, typically persimmon or dark blue. The most common occupation at the time was farming. It was easier to blend in with crowds when you knew the land well, and carrying a sickle, was usual for farmers and wouldn't look like a ninja weapon in their hands. Ninja clothing is also known to be easy to move in and inconspicuous for farm work.

Ninjutsu (Art of the Ninja) A ninja's role was conducting espionage, and it was essential to stay alive and return with information quickly and reliably. To this end, the ninja excelled at hiding and escaping from their enemies. The ninja arts are referred to as Ninjutsu, with techniques in psychology and pharmacology. Reaching high places is no problem

Typical techniques included: the art of disguise, where the ninja disguised themselves as monks or street performers, the art of the water spider, allowing them to cross water like a spider and the art of fire, to distract opponents with pyrotechnics, typical moves in any spy movie.

Koka and Iga: The Representatives of the Ninja Ninja organizations are said to have existed throughout Japan (some say there were more than 70). The most famous of these organizations are the Iga and Koka ninja. The regions they operated in were only 20 km apart, in a straight line, and regularly interacted with each other.

Check the end of the article for more information on directions between Iga and Koka. Hakusan Inari Shrine, next to the Iga Ninja Museum

The Iga Ninja lived in the northwestern part of present-day Mie Prefecture. They were known for their skill in combat, and their specialties were pyromancy, using gunpowder, conjuring for self-defense, and warding off evil spirits. Interestingly, their relationship with their employers was through cash contracts. They were a group of professionals who protected their employers but did not have more than a professional relationship with them.

Step Into the World of Iga Ninja Iga City in Mie Prefecture is officially the "Ninja City" and has many places visitors can experience the world of the Iga ninja. Visitors can rent ninja costumes at various locations in the city, and at the Iga Ninja Museum, they can experience ninjutsu as in the modern age. In addition to ninja artifacts, there is an Asura ninjutsu show using real weapons and a Karakuri House, providing fun for adults and children alike. Asura's Ninjutsu show is a must-see On top of that, you can enjoy a ninja-inspired meal at Nikaku Shokudo, offering a wide variety of vegan and halal menus (and a prayer room).
The attractions are in a small area near the station, so when you arrive at Ueno City Station, you can spend the entire day exploring the ninja sites on foot. Please read this article for more information about sightseeing in Iga. Ninja swords were shorter and straight for easy concealment

The Koka ninja lived in and around the city of Koka in what is now southern Shiga Prefecture. The Koka ninja were noted for their knowledge of medicinal herbs and medicine and excelled at magic tricks using poisons and medicine. Even today, many pharmaceutical companies operate in Koka. The biggest difference between the Koka and the Iga ninja was their loyalty to their lord. Koka ninja were known as Koka bushi because they swore absolute loyalty to their lord and risked their lives to protect them. Additionally, when problems occurred, representatives from each house would gather to make decisions, suggesting a high sense of unity and solidarity.

To Koka City: Home of the Ninja There are many ninja-related spots in Koka City. At the Koka Real Ninja Museum, a tourist information center, displays of ninja artifacts, riddle-solving games, and rubber shurikens are available free of charge, and ninja shows and other regular events. Ninja training along the wall At the Koka Ninjutsu Village, visitors can engage in nine different types of ninja training, plus see valuable ninja artifacts at the Koka Ninjutsu Museum, boasting the world's largest collection of ninja artifacts. In addition, Aburahi-jinja Shrine, where the Koka ninja used to gather, and the only existing ninja mansion in Japan, provides visitors with the opportunity to step back in time to the days when the ninja existed.
For more on sightseeing in Koka. 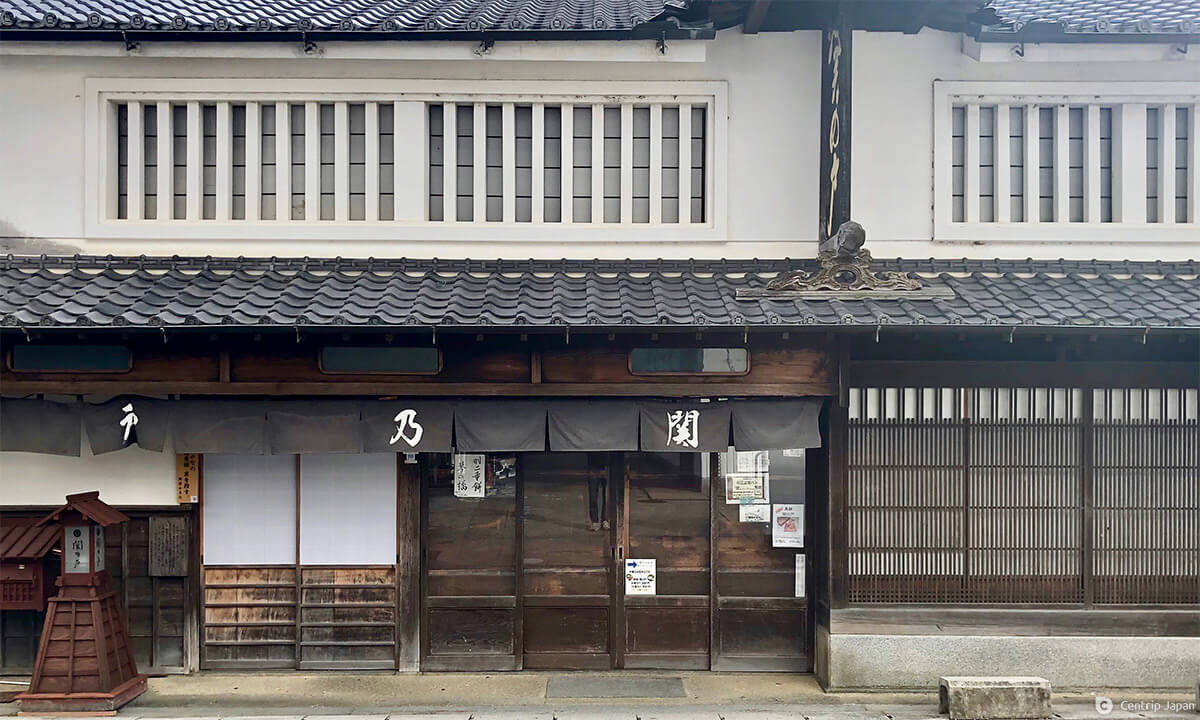 Hattori Hanzo is the most well-known ninja, and the Hattori family are the original ninja retainers of the Tokugawa shogunate, serving for many generations and commanding both the Iga and Koka schools of ninja. The name Hattori Hanzo is hereditary, and it is believed that there were about 12 Hattori Hanzos, and their descendants run Fukawa-ya, a long-established confectionery shop in Sekijuku, in business for roughly 380 years. Aki Hattori's family is in the 14th generation of the family, counted from written records, and possibly the 19th generation, if one considers the legends. Aki Hattori's family inherited books passed down through generations, including oral traditions. One of the most memorable episodes, characteristic of descendants of ninja, is how his grandparents taught him to walk into people's hearts from when he was a child. He says this lesson is about not trying to be liked but opening the hearts of others, and it is a valuable lesson in his current business. 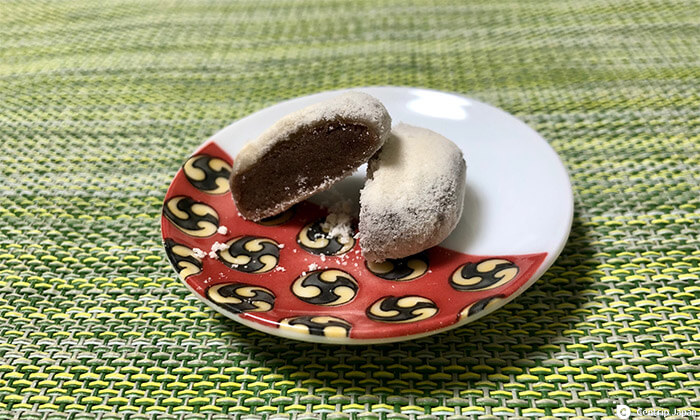 Seki no To is a confection made in the image of white snow piled up on Mount Suzuka. A few years ago, a scientific study of Seki no To revealed that it remains preserved for as long as two years. Hattori says that the ninja had a wealth of knowledge in pharmacology and medicine, which may have contributed to the creation of Seki no To, a long-lasting and tasty food. Seki no To is available in Sekijuku and department stores nationwide. By car, it takes about 30 minutes via Prefectural Routes 680 and 775.
By train, starting from Iga-Ueno Station, take the JR Kansai Honsen Line from Iga-Ueno Station to Tsuge Station, then transfer to the JR Kusatsu Line at Tsuge Station to go to Konan Station. From Konan Station, it is a 20-minute walk to the Koka Real Ninja Museum, a tourist information center that serves as a base for sightseeing in Koka. If your transfer goes well, the trip will take about one hour.
To get to Koka Ninja Village, get off at Koka Station, two stops before Konan Station, and take the free shuttle bus.

The history of ninja is shrouded in mystery, and many things are still unknown today. The Chubu area is where you can touch the veiled world of the ninja. There are many places related to the ninja here, so please visit, but watch out for ninja that might be spying in the shadows. Perhaps you'll even see a ninja at Chubu International Airport! If you can detect a ninja, you have what it takes to be one of them.