Takayama is a popular tourist destination for foreign travelers with over 500,000 visitors a year.
The secrets to its popularity are Takayama's historic townscape which is reminiscent of Kyoto, tourist spots including hot springs, and Takayama's special local cuisine.

There are many famous local cuisines including Takayama Hida beef (飛騨牛/Hida gyu), Mitarashi Dango (みたらし団子 - rice dumplings in a sweet soy sauce), Gohei Mochi (五平餅 - skewered rice cakes with sweet soy sauce), Hoba-miso and Tsukemono Steak (朴葉味噌や漬物ステーキ - soy-bean paste and pickled vegetables cooked and served on a magnolia leaf), and many more. If you can choose only one recommendation is Takayama ramen.

What's so different about Takayama ramen compared to regular Japanese ramen? Are there any recommended shops? Can we find the same ramen eaten by the protagonist in the popular Takayama based animation, Kimi-no-Nawa (君の名は。- Your Name.)? Let Centrip Japan show you!

The distinguishing features of Takayama ramen 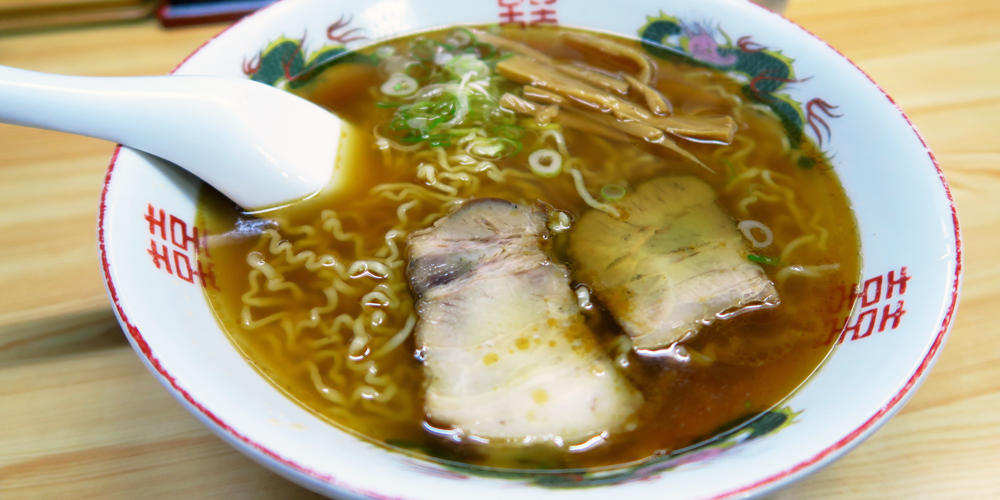 Takayama ramen originated from outdoor Chinese noodle food-stands. The soup is made from chicken bone broth and soy sauce that imparts a light flavor. The noodles are very thin and curled. The soup is made by mixing dashi (ダシ - a soup and cooking stock used in Japanese cuisine.), soy sauce, and mirin (みりん - a type of rice wine similar to sake) and other ingredients together with a large pot. Leeks, grilled pork, and seasoned bamboo shoots are used commonly as toppings.

The Japanese animated film, "Kimi-no-Nawa" enjoyed international popularity. In the film, the main character visits a ramen shop called Yoshino. Unfortunately, Yoshino is a fictional restaurant, but there are plenty of places where you can eat Takayama ramen! If you liked the film, please come & try some!

Many ramen stores are within walking distance from JR Takayama Station, the bus center, and old town. Some places are open day and night, so you may want to try several ramens to compare them!

Located in the north-central area of Takayama City, 800 meters from JR Takayama Station. It's about a 10-minute walk.
Chinese Noodles Kadoya (中華そば 角や) is a long-established store with a history of more than 50 years. 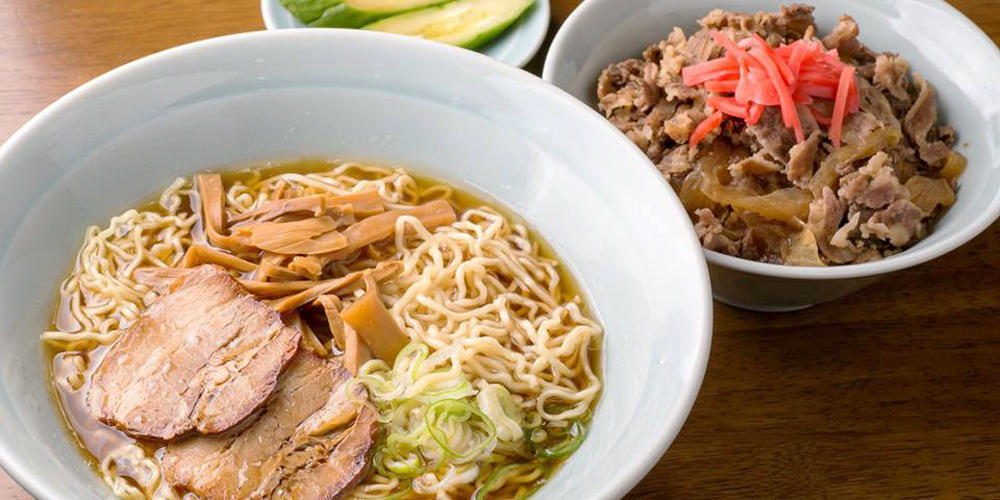 Chinese noodles come in regular (¥600) and large (¥800) sizes. Toppings include chopped leeks,
sliced bamboo shoots, and slices of grilled pork.
The soup is made of chicken bone broth soup with a hint of seafood.

In addition to Chinese noodles, there are also side dishes such as a Hida beef mini rice bowl, a Hida grilled pork mini rice bowl, authentic Hida roast beef, and stewed Hida beef tendons simmered in miso. It's highly recommended for those who want to try Hida beef as well as the standard Takayama ramen.

Many bars are located nearby, making this a great spot to stop for an after-drink meal.

Chinese noodles in regular (¥650) and large (¥750) sizes and noodles with grilled pork are the only items on the menu. 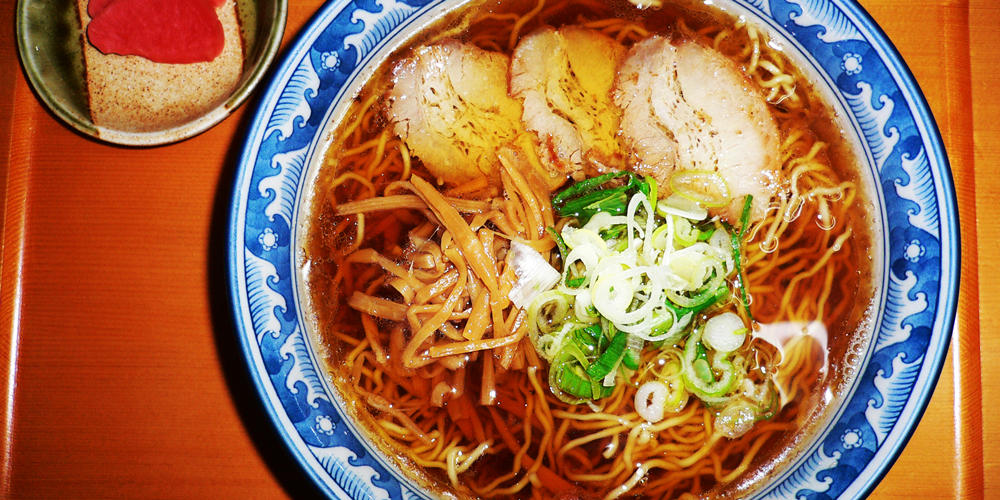 Toppings for the Chinese noodles are chopped leeks, homemade seasoned bamboo shoots, and three slices of grilled pork. Seasoned bamboo shoots are sliced and cooked with sugar and soy sauce. They are chewy and go perfectly well with the thin noodles.
The soup is made with carefully selected ingredients such as Hidaka kelp (日高昆布 - Hidaka konbu) from Hokkaido, dried sardines from the Sea of Japan and 2 different types of soy sauce from Takayama. The noodles are specially made with 100% flour and contain no eggs, so people who are allergic to eggs can eat them without worry.

Approximately an 8 minutes walk from Takayama Station. Located one street away from the main street, Chinese Noodles Nakatsubo (中華そばのなかつぼ) is a long-established store with 55 years of history. White letters set on a deep blue curtain is the symbol of the store. 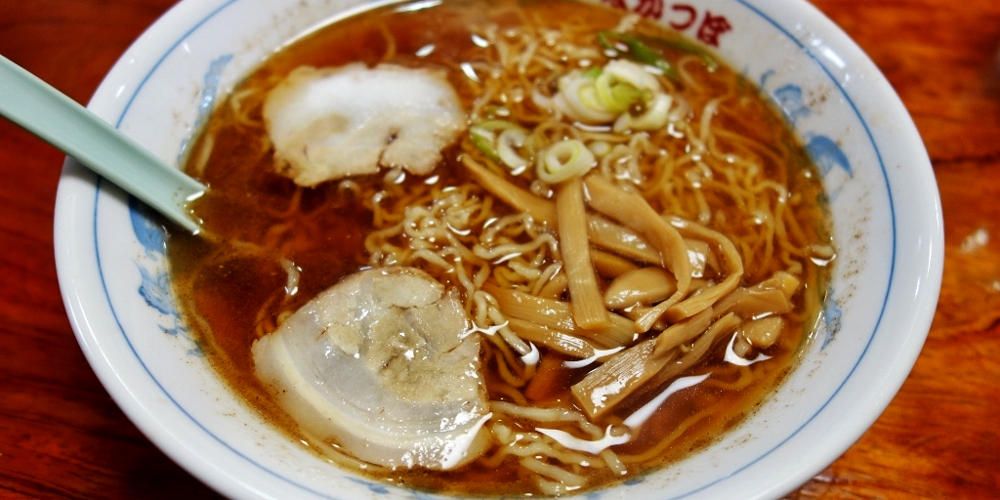 Toppings for the noodles include chopped leeks, sliced seasoned bamboo shoots, and two slices of grilled pork. The chicken bone broth with soy sauce has a hint of seafood taste and it is also rich in color and flavor because they use Tamari soy sauce (たまり醤油/tamari shoyu - a soy sauce locally produced mainly in the Chubu region. It is rich in color and flavor). Chicken bones and local vegetables are used for the soup.

Many Takayama ramen shops close early, but this shop is open until 11pm, and /is cherished by tourists and locals alike. 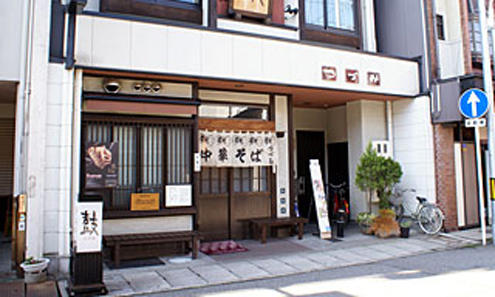 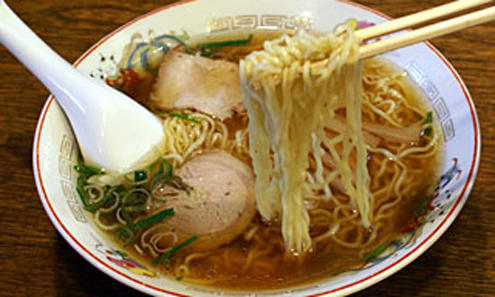 About 600m and an 8-minute walk from Takayama Station. Tsuzumi-soba (つづみそば) has a large curtain that reads Chinese Noodles (中華そば/Chuukasoba).

Since its establishment in 1956, the store has maintained its traditional taste for more than 60 years. Ample vegetables and pork bones are added to a chicken broth with a soy sauce base and combined with very fine noodles.

Chinese noodles in regular (¥650) and large (¥750) sizes, wonton noodles and grilled pork noodles are also available. Toppings for the noodles include chopped leeks, sliced seasoned bamboo shoots, and two slices of grilled pork. The soup tastes as light as is looks, but with a complex flavor profile that you will never tire of eating.

5.Gouri, two minutes from Takayama Station, a varied menu with a rich history 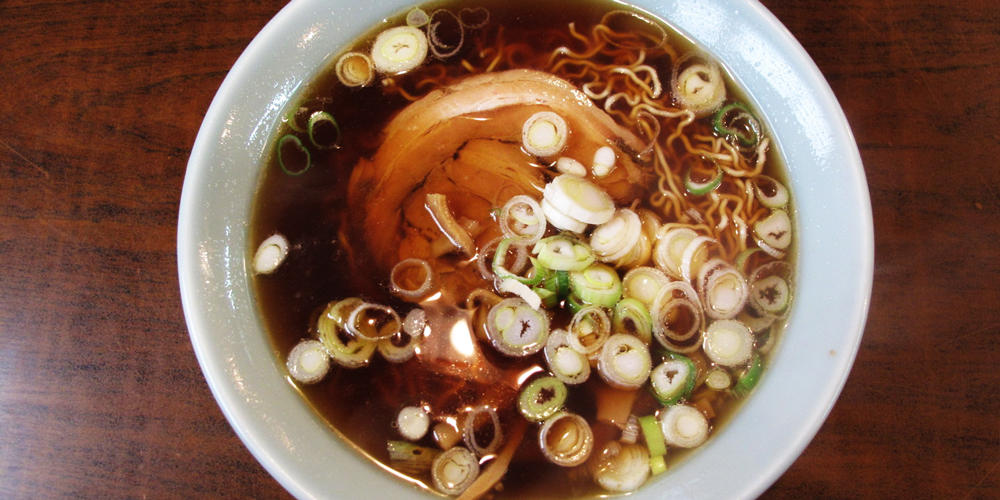 Only a 2-minute walk from Takayama Station and a 5-minute walk from the old town. You can conveniently stop by while sightseeing. Gouri (郷里) is a long-established store with over 60 years of history.

The thick chicken bone broth with soy sauce has a rich flavor with the hint of seafood. The noodles are homemade and they go well with the thick soup.

There are several Takayama ramen shops within walking distance around Takayama Station and the old town. If you are hungry, it's enjoyable to walk around and compare tastes while searching for your favorite flavor.