Fireworks Festivals (花火大会/hanabi taikai) are must-see events during the summer! Put on a Yukata (浴衣 - a casual Japanese summer garment) and visit the food stand while you watch the fireworks in excitement.
Try a bit of Japanese and let out a big "SUGOI" (すごい - fantastic, wonderful) when the fireworks explode!
Centrip has selected 5 popular Fireworks Festivals in Central Japan. Pick the one you like! 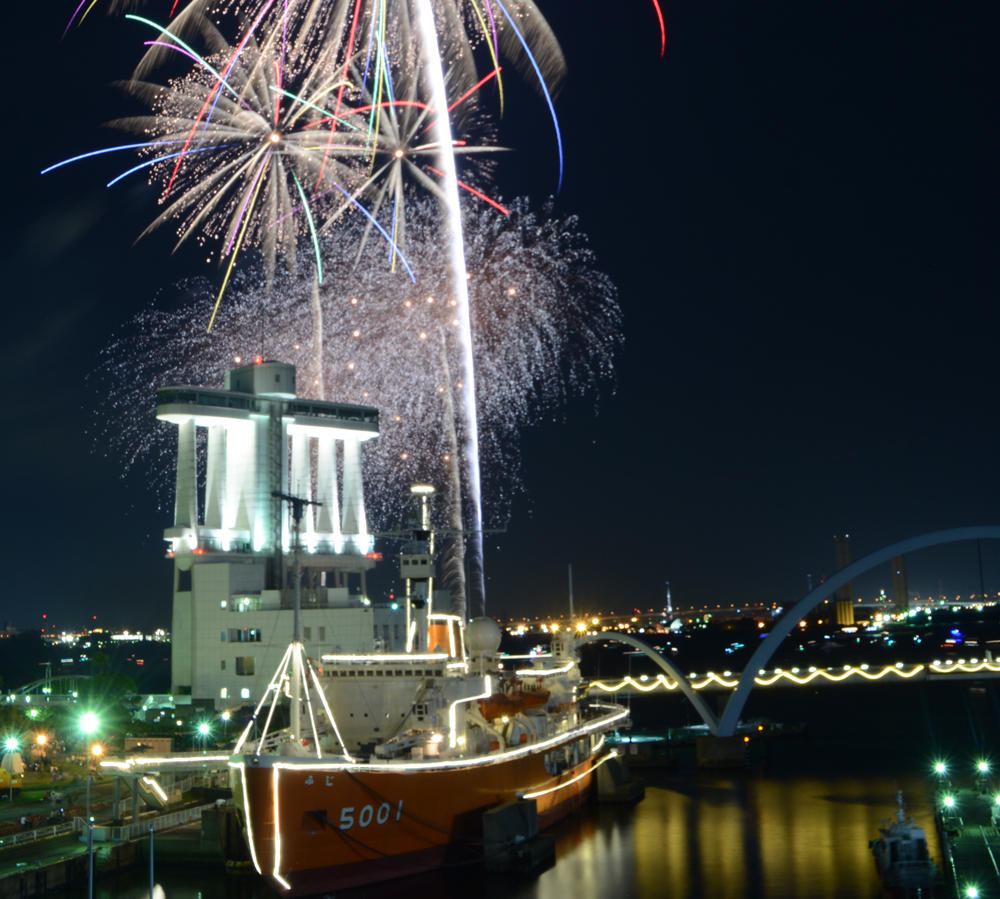 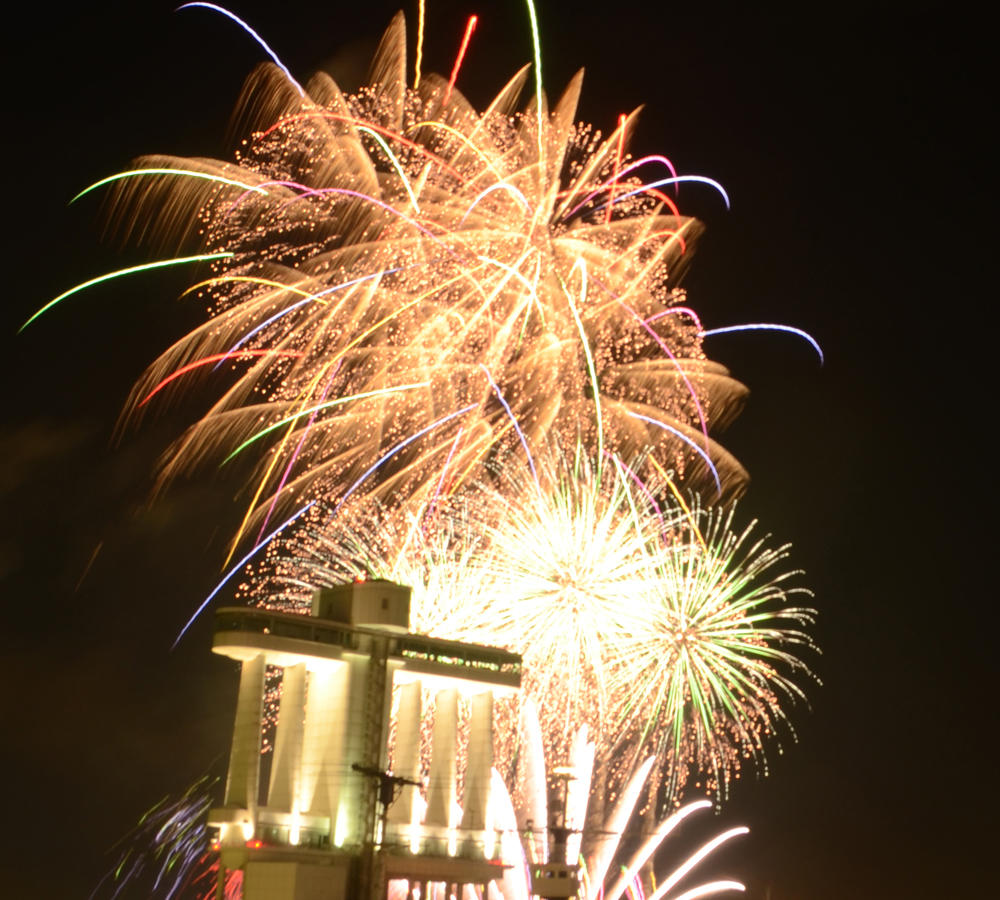 Nagoya Port Festival is the most famous summer fireworks festival in Nagoya!
Monday, July 15 is a national holiday, Uminohi (海の日 - Marine Day) in Japan. Activities begin at 11:30 at Nagoya Port, and include Taiko (太鼓 - Japanese drums), Dashi (山車 - colorfully decorated floats) and a dance parade. You will get a sense of the Japanese passion for summer festivals.

The highlight is the fireworks festival beginning at 7:30 pm. More than 3000 fireworks will light the sky over the ocean with the rhythm of the music. It is a visual an auditory feast attended by about 390,000 people.

Nagoya Port is easily accessible and can be reached within 30 minutes from Nagoya Station. It is a good choice for travelers who don't want to travel too far out of the way.

2. Mie, Kuwana Suigou fireworks festival
One of the 10 most popular firework festivals! 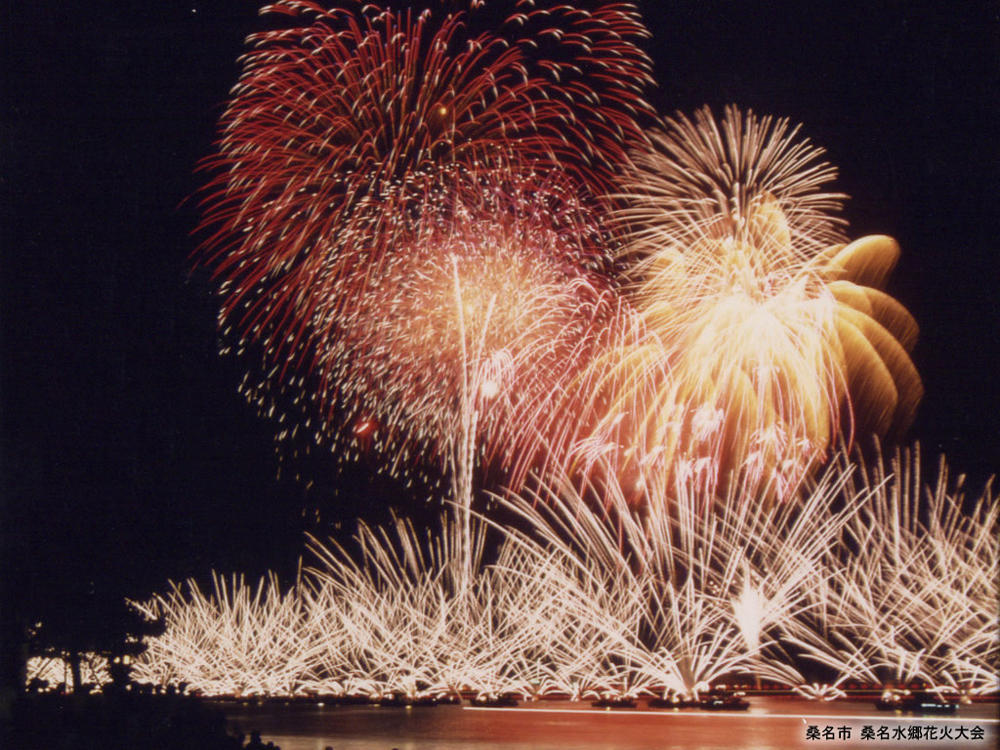 Are you curious about the top 10 firework festivals in Japan? Then come to the Kuwana Suigou Fireworks Festival in Mie Prefecture!
The Kuwana Suigo Fireworks Festival (桑名水郷花火大会 - Kuwana suigou hanabi taikai) with over 80-years history is ranked 10th in Japan's best fireworks festival rankings. Taking advantage of the river, 10,000 fireworks will be displayed in 1.5 hours on a small island in Ibi River (揖斐川 - Ibi gawa) without a break. The reflection of the fireworks on the river is a sight to behold. 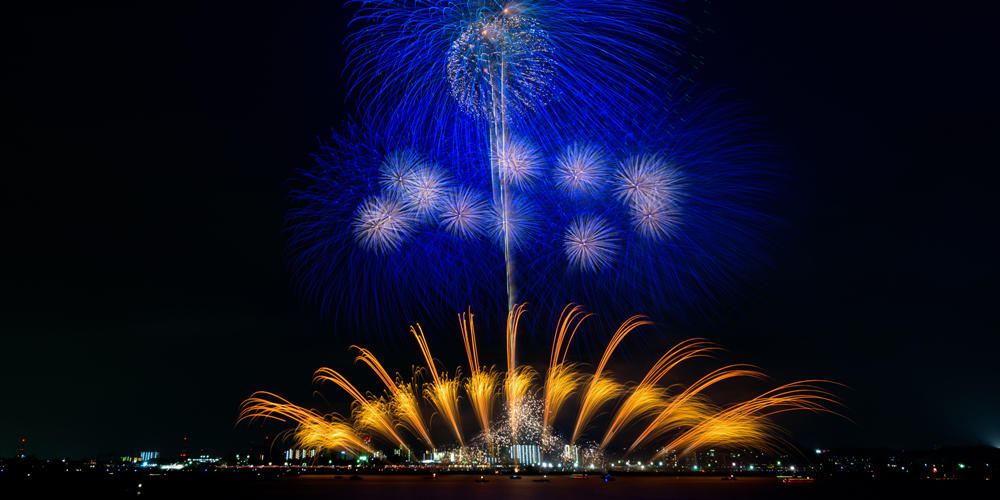 There are many types of fireworks used in Kuwana, even some super-large fireworks can be seen here, such as the Nishakudama(二尺玉), the largest firework in Central Japan area. The diameter when it explodes is roughly 480 meters, an amazing display to be sure! 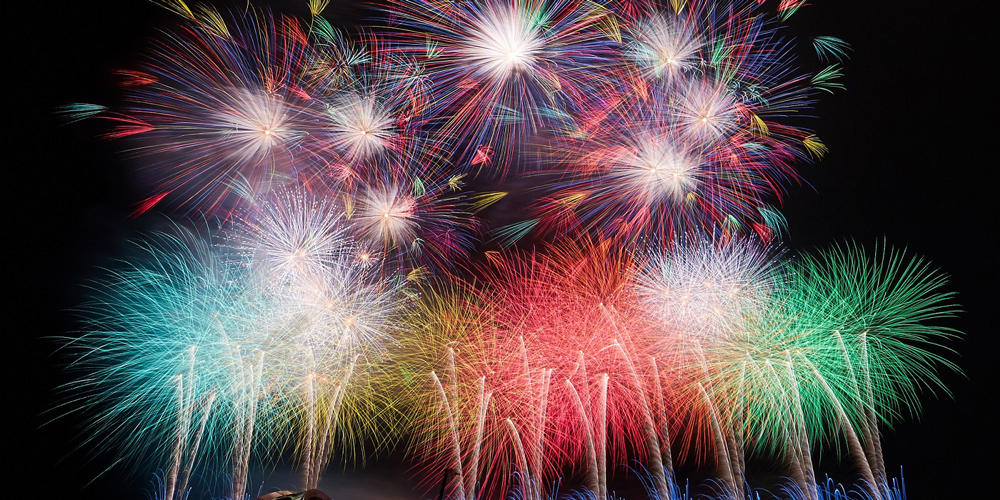 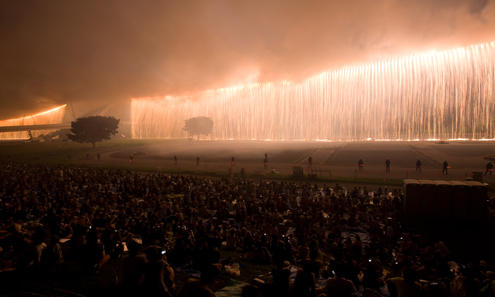 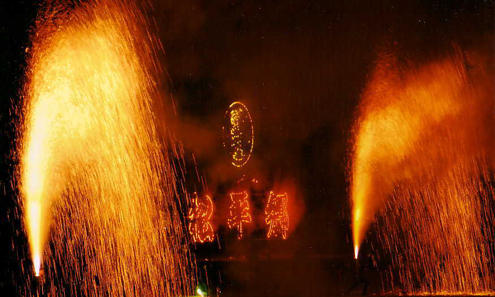 Come to Toyota for Central Japan's largest fireworks festival!
Fireworks show in Toyota is produced by well-known Japanese fireworks masters. It has been listed in the top 10 Japanese fireworks festivals recommended by fireworks masters. Fireworks such as Tezutsu Hanabi(手筒花火), a firework fired by hand; Niagara Falls, a wall of falling stars made look like a waterfall; 13,000 fireworks bloom with the rhythm of the music. Past observers have said "It's like a fairy tale", and "It's completely different from others”. No matter how crowded the festival is, it’s still worth watching. 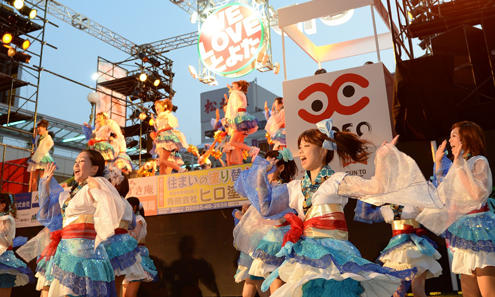 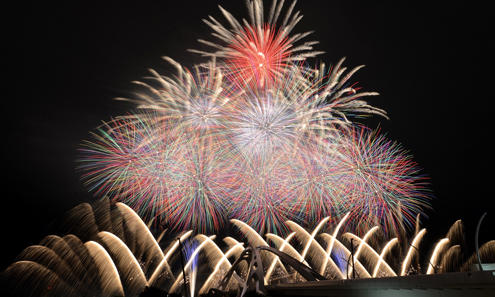 In addition to the fireworks, a dance parade is also held. 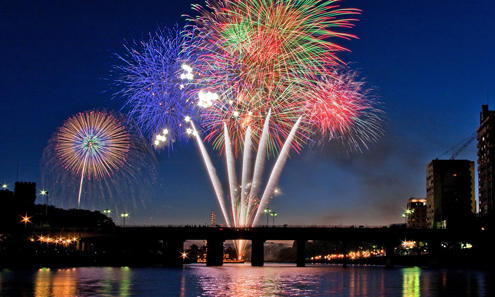 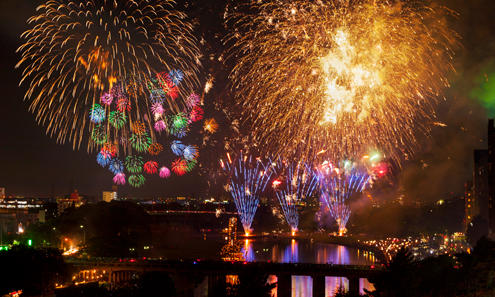 Although there are fireworks festivals all over Japan, if you want to see traditional fireworks from the Edo period, then come to Okazaki!
Okazaki City was the birthplace of Tokugawa Ieyasu, a general of the Edo period. At that time, the Tokugawa family had control of gunpowder manufacturing technology and developed Mikawa Fireworks(三河花火/Mikawa hanabi). Because gunpowder production was limited to modern-day Okazaki it is still a place famous for fireworks production. 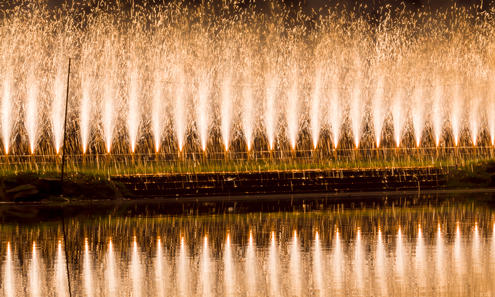 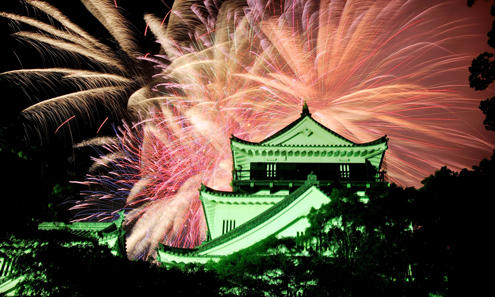 The greatest of Mikawa fireworks are the Goldfish fireworks(金魚花火/kingyo hanabi)! The goldfish fireworks are set on the water, and the three-color fireworks move over the water giving the appearance of swimming goldfish. Others like Silver Falls, Oonoshi spray fireworks into the sky with a large tube. During the 2-hours fireworks festival, you won't want to miss a second.

If you leave too late the place will be packed with people! If you want to get out on time try leaving before the show finishes. 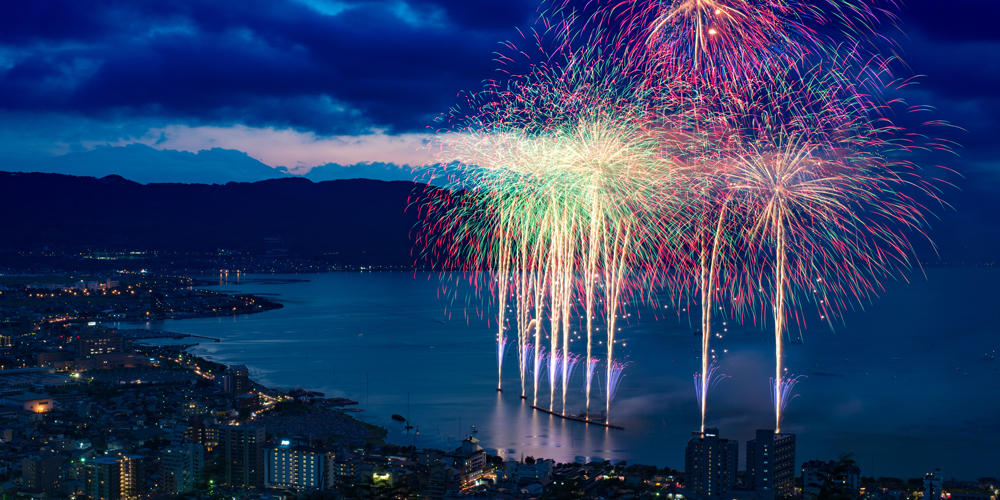 With over 40,000 fireworks this festival has the most of any other in Japan!
Suwa-ko (諏訪湖) fireworks were originally held after the war in 1949, aiming to give the public hope for the future. With the serene and vast Suwa Lake as the stage, 40,000 fireworks go off in sequence along with the music. Thanks to the mountains around Suwa lake, the echos of the fireworks are amplified making the fireworks show even more stupendous.
The must-see displays are the Kiss of Fire, continuous fireworks on the water, and the 2km Niagara Falls fireworks. 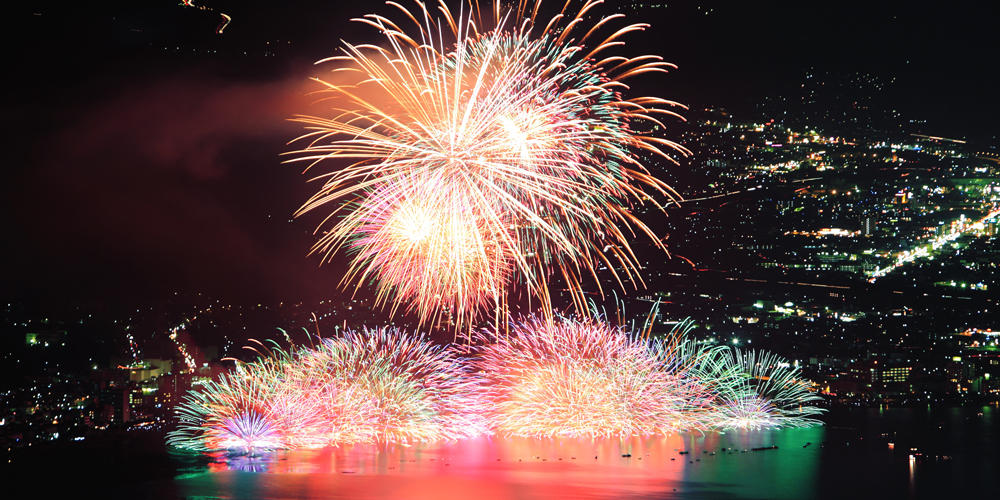 The Suwa Lake firework festival attracts 500,000 people every year. Many people come from Tokyo and Nagoya. During the day of the festival, it is hard to book a hotel near Suwa Lake. If you want to stay there for one night, it may be better to find a hotel in another area.